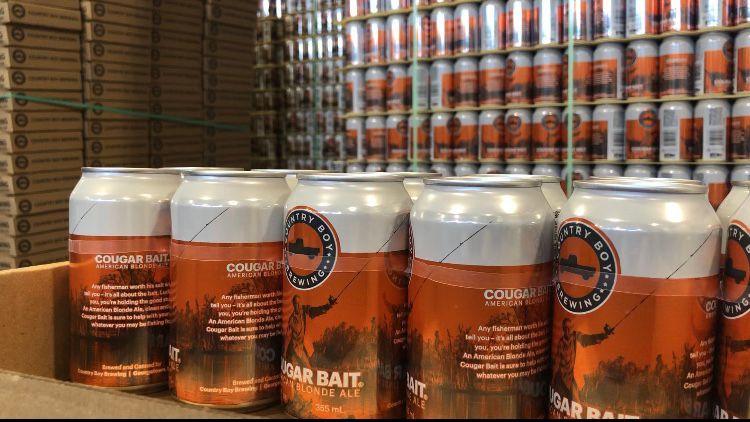 Country Boy Brewing expands along with the Georgetown community

GEORGETOWN, Ky. — Country Boy Brewing is known for their unique craft beers. Cougar Bait and Shotgun Wedding are just two of the beers that have a story behind them.

In 2011, Daniel Harrison along with his colleagues created Country Boy Brewing in Scott County, an idea that all started in Japan years before.

“Japan's a great country, great culture, great people, but it's hard as a guy from Kentucky to blend in there. It's if you're gonna spend it's hard culture to kind of assimilate into and so if you're gonna spend any significant amount of time there need to kind of have a hobby or a group of people or friends and so I had a friend Vanessa, who's back in Lexington seemed to like flower arranging the like cultural stuff. Friends that are into history, friends into sports and so Nate and I decided to get into beer. I'm always going to be a fan. Loves craft beer, loves adventures, beers, foreign beers,” Harrison said.

For three years, Harrison had the opportunity to teach English to students in Japan and it was there that they decided to take their passion for beer to a new level.

Over the years, Harrison learned to brew his own beer and decided to bring his skills back to his hometown. Starting with a two barrel system, his company has now grown into a full production brewery.

“I still think if I had to do it over again, I’d choose Scott County to grow up in and live in. And so I've always wanted to put roots down here and stay here. And so to be able to come back and operate a business that's 10 minutes away from where I live in the community that I love, you know, we'd go on a Taproom right now and I probably know 90% of people out there we went to high school together or in high school with some of their friends, It's surreal,” Harrison said.

Harrison says over the last few years, he has been able to grow with the community and says his ties with Toyota go way back.

“To build our expansion of the Country Boy Brewing in the shadow of Toyota in my hometown. It's very like a Disney movie. You know, we would not exist, period. If somebody back in the day, the current mayor now, Tom Prather was also mayor in 88 when they created the sister city relationship and they broke ground on Toyota,” Harrison said.

Harrison says with his Kentucky craft beer, he has Japan to thank and is excited to be growing in a community alongside Toyota.