One bourbon distillery's waste is this man's treasure

LOUISVILLE, Ky. — Kentucky’s bourbon industry is booming, with distilleries pumping out the state’s signature spirit at record rates. But with more bourbon comes more stillage, the unavoidable byproduct of the production process.

Now, after a decade of unprecedented bourbon output in the commonwealth, Kentucky is swimming in the watery mixture of corn, rye, and yeast that has traditionally been dried out and fed to cattle.

“The big challenge is that bourbon is increasing in production much, much faster than we are adding cattle in the state,” said Brad Berron, research director at the University of Kentucky’s James B. Beam Institute for Kentucky Spirits.

Dr. Jagannadh Satyavolu has a solution to that problem. The University of Louisville chemical engineer has developed a process that extracts the low-calorie sweetener xylose from stillage, 96 million gallons of which are produced statewide each year. After the xylose is extracted, Satyavolu’s company, Bioproducts LLC, has a process to turn what remains into activated carbon, which is used in everything from water filters to batteries.

“We are providing a solution so that nothing goes unutilized,” Satyavolu said in his UofL office this week. On his desk sat a glass bottle of xylose, which is used to sweeten gum and baked goods, a bottle of activated carbon, and a stick of bio-coal, which is also produced from the stillage. “Everything is maximized,” he said.

Earlier this summer, a group of bourbon industry insiders and the Kentucky Cabinet for Economic Development put out a call for innovative solutions to the stillage surplus problem.

“We are asking people for their best ideas to use this stillage in ways that create jobs and moves Kentucky’s agritech industry forward,” Gov. Andy Beshear said in a news release, which noted that 10 gallons of stillage are left behind for each gallon of bourbon. “We’re building a sustainable economy that works for all Kentuckians, and that includes ensuring our industries operate as efficiently as possible.”

Currently, some large distilleries dry the spent grains on their own and ship them overseas to be used as cattle feed. But that’s an expensive, energy intensive process that many craft distilleries can’t afford. It also produces high levels of carbon in an industry that is actively working to reduce emissions.

“We want to find solutions that have better carbon footprints and can still benefit our local communities,” Berron said.

Satyavolu and his partners at Bioproducts believed they had such a solution when they entered the pitch competition, which was held in downtown Louisville earlier this month.

The judges agreed, awarding Bioproducts first-place from a field of six presenters. Blake Layfield, who works in global research and development at Beam Suntory and served as a judge of the pitch contest, said it was Bioproducts' holistic approach to upcycling stillage that impressed him the most.

“It was a very circular solution, which is what we found really interesting,” he said. “It wasn't just a one-size-fits-all. But it was also scalable.”

Along with addressing the surplus stillage issue, Bioproducts' technology would help the bourbon industry meet its sustainability goals, which have become more aggressive in recent years. Recently, Beam Suntory pledged to cut emissions in half by 2030 and Diageo, which makes Bulleit Bourbon, opened a carbon-neutral distillery in Lebanon, Kentucky.

“We're all looking at our supply chain, from end to end, for opportunities to be more sustainable,” Layfield said. “It's not going to be a silver bullet. It's going to be a variety of puzzle pieces that we need to put together and this is one of those puzzle pieces.” 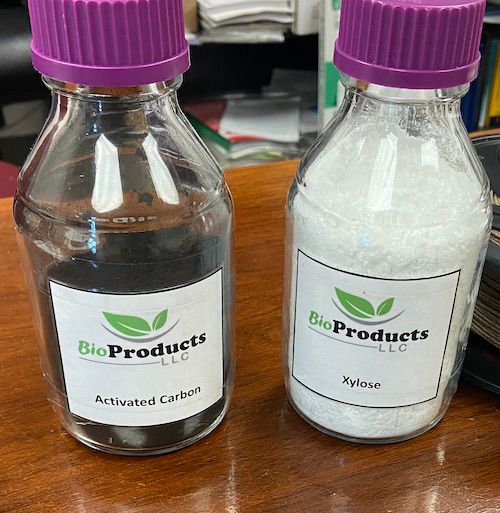 For most people, the product that’s left over after making bourbon wouldn’t look like an opportunity. But Satyavolu sees grains differently than most people.

And when it comes to the fiber that’s left over in stillage, he sees major opportunities. “This is god-given natural sugar,” ​​Satyavolu said of xylose. He’s currently working with companies that are using it as a sweetener in baked goods and he can imagine low-calorie drinks and protein bars that use xylose instead of artificial sweeteners.

And those are only the beginning. “Our real interest is taking this material and turning it into fuels,” he said. He’s also produced filament used for 3D printing and biocoal that can replace typical coal in industrial settings.

The business plan for Bioproducts involves licensing its technology to manufacturers, distilleries, and anyone else who sees value in it. But it’s the farmers who Satyavolu is most excited about helping.

“Corn farmers are small farmers who are losing money,” he said. “With added revenue from every acre of their crop, maybe the small farms can survive.”