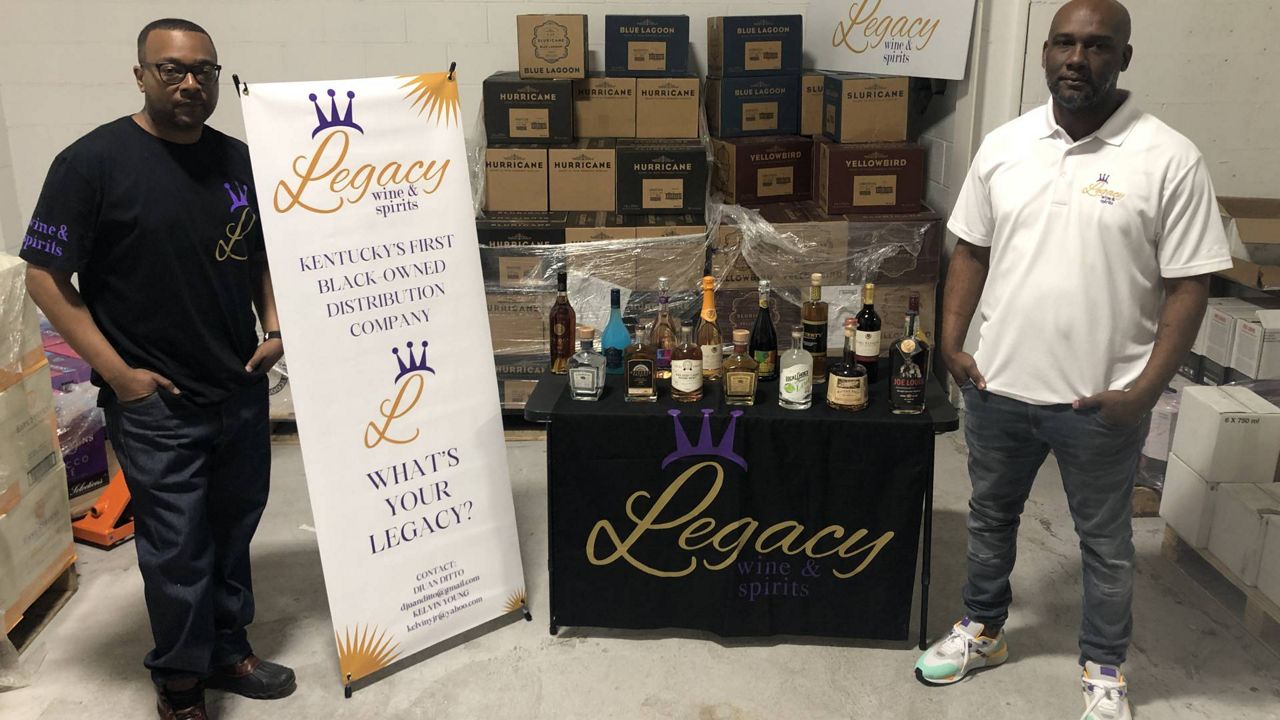 LOUISVILLE, Ky. — Looking for your next pour? Longtime Louisville friends are the operators of Kentucky’s first black owned distributors.


Djuan Ditto, co-owner of Legacy Wine and Spirits, said, "there’s billions of dollars coming right out of Kentucky dealing with alcohol. How do we tap into it?"

A new generation of alcohol innovators are trying to stir up an industry stuck in old trends. Kelvin Young, co-owner of Legacy Wine and Spirits, said they key is thinking differently.

"Think outside the box and try to do different things instead of doing the norm. Instead of us just wanting our own brand there’s other avenues in all these industries that we can take advantage of," Young said.

Childhood friends since the 7th grade, Young – who is also a Spectrum employee – and Ditto crafted a plan with a vision to help accelerate the growth of their business dubbed Legacy Wine and Spirits.

"Most people just argue over money, we just lost a lot of money. This is the first time we’ve had a business that’s kind of doing what we want it to," Ditto said.

Despite the setbacks caused by financial hurdles and the pandemic, within 4 years, the company has expanded to a warehouse space to store their products.

Currently, on a part-time basis, the entrepreneurs distribute to 45 locations across Kentucky with a goal of expanding to 200 locations.

"We kind of had a failure before stumbled upon the opportunity. We ran into challenges as brand ambassadors where we couldn’t find distributors to pick up our smaller named products so we took into our own hands," Young added.

Young said diversity among the wine and spirits industry is underrepresented across the Bluegrass State.

With a portfolio of 26 choices including lime tequila, black cherry bourbon, and mango vodka, these business partners are the first Black-owned distributors in the state.

"It was kind of a surprise to us for it to be 2021 and still being the first at anything but it’s definitely an honor and we take on the responsibility to lead the way," Young said.

Liquor distribution in Kentucky is heavily regulated with a three-tier system composed of manufacturers, distributors and retailers; each tier has its own set of rules.

Getting the product onto shelves requires passing through the first hurdle – getting carried by a distributor.

"We’re the middle man. We provide the deliveries and the selling to stores, restaurants, and bars," Young said.

This duo is now focused on changing the perception of distribution at an ownership level.

"We focus on diversity with Black-owned brands, woman-owned brands, and try to give them the opportunity that they wouldn’t get with the larger distributors," Young said.

"If you have a liquor license we can sell to you," Ditto added.

With a license to distribute only in Kentucky,  Ditto and Young have plans in the future to expand to other states including Georgia, Tennessee and Florida.