"It's Like the 1980s All Over Again": Sports Card Collecting Booms During Pandemic

LEXINGTON, Ky. – It is time to dust off that old box of sports cards.


The COVID-19 pandemic and a touted NBA rookie have created a classic case of low supply and high demand that has turned the hobby of collecting sports cards into a full-fledged business for even the more modest collectors.

As the threat of the coronavirus shut down production and stymied transportation of cards to retail stores and hobby shops, cards of Duke University standout and 2019 No. 1 overall draft pick Zion Williamson were about to hit the market. The frenzy to collect those rookies and the lack of available cards created an explosion of not only the popularity of cards in general but also of value.

The documentary “The Last Dance” about the 1990s Chicago Bulls NBA dynasty added fuel to the collecting fire, as both new and old collectors began seeking, buying and selling Michael Jordan and Scottie Pippen cards, among others.

The sports card market was saturated in the 1980s and 1990s with too many cards as companies like Donruss and Topps made hundreds of millions that sold cheap and were nearly worthless – collectors routinely sold cards for less than half of their book value. Since the beginning of the pandemic this past March, both older and newer cards were commanding a premium price, oftentimes well above book value. Graded cards are selling for even more and card-graders such as Beckett and PSA have been flooded with requests that have created a months-long backlog.

It is both a terrible and wonderful time to be involved in sports cards. It is bad because soaring costs – some single wax packs containing six cards sell for more than $100 – have priced the day-to-day collectors out of the hobby for the most part. The hobby is currently a sellers’ market and it has been wonderful for those willing or wanting to sell pieces from their collections and for the “flippers,” those who buy low, get the card graded, and sell high.

The increase in collecting has been driven by everyone from Wall Street executives that saw an opportunity to always make money on a deal to those in their 30s and 40s who collected when they were young and found themselves at home revisiting their card collections during pandemic-related restrictions.

Popularity not dying down anytime soon

Sportscard collecting is having a moment not seen since the 1970s and 1980s. This year saw sales of sports cards at public auction reach all-time highs. More than 10 cards have sold this year for $500,000 or more. Two basketball cards sold for $1.8 million each, a Lebron James rookie card, and a Giannis Antetokounmpo rookie card. A 2009 Mike Trout baseball card sold at auction for a record-breaking $3.84 million.

Leore Avidar, the founder of Alt, a securities firm specializing in alternative assets, believes records will continue to be broken. He predicted the first $10 million card will sell within the next two years.

Donald Foster is the organizer of the monthly card show in Richmond, Ky. He said he has canceled two shows because of COVID-19, but otherwise, they have been busy with lots of vendors and customers.

Small boxes of cards containing four or five packs called “blasters” sell for $19.99 at places like Walmart and Target. Blasters are being sold out as soon as they hit shelves and are being re-sold for $80 to $120, depending on the set. Ben Aguirre of Cardboard Icons said while many longtime collectors are being priced out of the hobby, the recent surge offers a time for those same people to reflect on a passion they have had for decades.

“This is a time for us longtime collectors to realize how good we actually had it all of those years,” he said. “The times when we were tasked with a milk run at 9 p.m. on a Tuesday night and wound up at Target buying the milk and a blaster or two. Those trips to the local card shop when we walked in with a $20 or $100 budget and walked out with a smile on our face and cards in our hands. The special feeling we had when you found out a distant relative, neighbor, or co-worker collected cards and it felt like you were part of the same secret club. Now is the time to look at your collection and appreciate what you already own. It’s a time to remember why you got into all of this in the first place.”

Some collections and collectors defy industry trends, and that is true with Jimmy Mahan. Collecting since he was 8 years old, the Lexington native worked as a student assistant under former Wildcats head coach Tubby Smith. 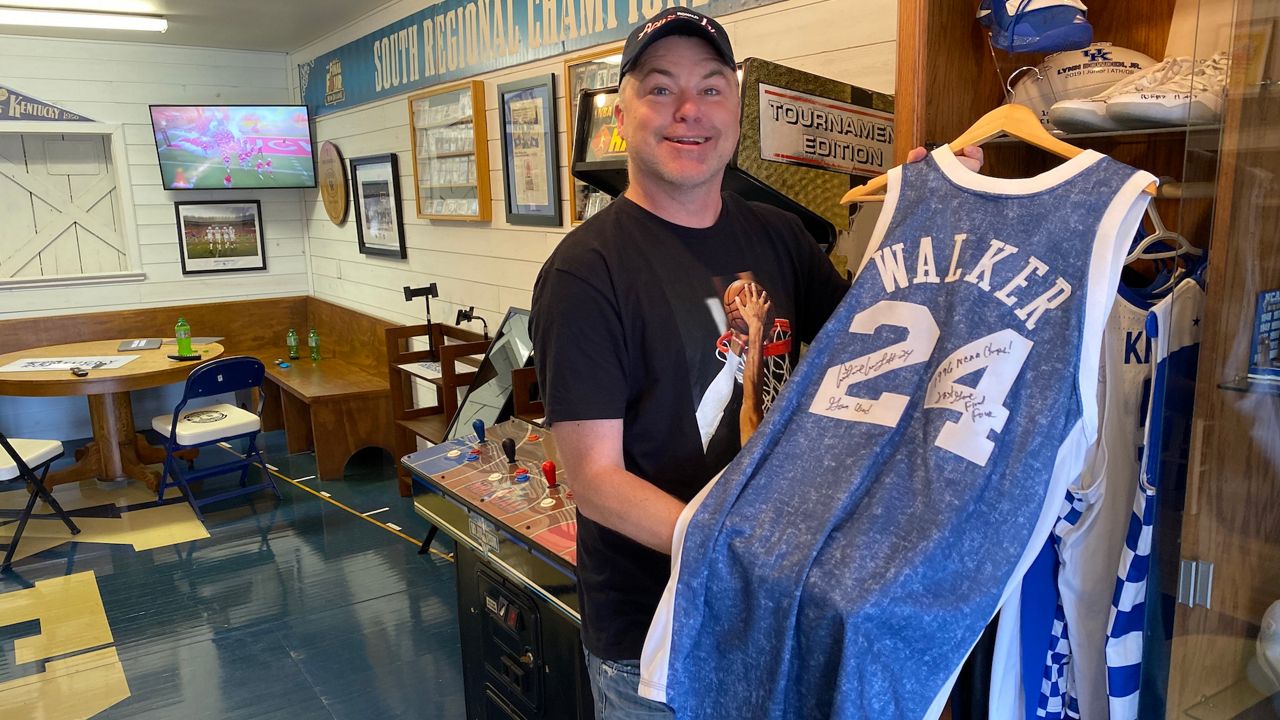 Mahan has a massive collection of cards and memorabilia across all sports, but none of his items are more impressive than his repertoire of UK-related property. When Mahan moved back to Lexington this past summer, he decided to put some of his collection on display at his newly opened retail shop on Romany Road called Jimmy’s Kentucky Roadshow. The half-store, half museum is a UK lover’s paradise, from the original Rupp Arena floor to one-of-a-kind signed shoes, jerseys, cards, and other memorabilia.

“These shoes are incredible,” Mahan says as he gently opens the front of a glass case. “These are the shoes Isaiah Briscoe wore in his triple-double game. He signed them, too.”

Since officially opening in the fall, Jimmy’s Kentucky Roadshow has hosted in-store autograph signings by former UK players P.J. Washington and Tony Delk, and has been visited by ESPN college basketball analyst Jay Bilas and UK Head Coach John Calipari, among others.

“My goal was for this place to be a destination shop,” Mahan said. “For me, it’s more about the process of collecting, the act of collecting than anything else. That’s why I opened this place. I want people to come here and enjoy being around this stuff and around other people. I want people, especially kids, to leave here smiling.”

Mahan, 44, a successful investor and entrepreneur, has nearly every card and piece of memorabilia he wants – he is currently searching for a specific Satchel Paige and “Shoeless” Joe Jackson cards that have eluded him for decades.

“I love the process of the hunt,” Mahan said. “Putting sets together and finding that one or those two cards to complete a set. I think that love is inside most people and I want my shop to be a place where people of all ages discover that love within them.”

Mahan is as adamant about the hobby itself surviving as he is about his shop being successful. He supports other local card shops and plans to develop a “Card Trail,” a collector’s version of the Kentucky Bourbon Trail. He is also adamant about supporting the community with plans to sponsor a Little League team and rewarding local students with hobby-related prizes for completing or participating in reading programs.