LEXINGTON, Ky. – A ceremony in downtown Lexington Wednesday, Aug. 19, welcomed five new residents. The five women are 20-foot tall suffragists placed at the corner of Mill and Vine streets to remind citizens of the important contributions women have made to the community and celebrate the 100th anniversary of the passage of the 19th Amendment, which prohibited states and the federal government from denying the right to vote to citizens of the United States on gender.


Gov. Andy Beshear (D) and U.S. Rep. Andy Barr, R-Lexington, were among the invited guests that came to celebrate the official lighting of “Stand,” a sculpture by nationally renowned artist Barbara Grygutis. “Stand” is the result of efforts by Breaking the Bronze Ceiling, a local campaign to build a monument to celebrate the history of women in Lexington and Fayette County.

“We have 5,000 monuments in the United States and less than 7 percent of them are of women,” Beshear said. “I’m pretty proud that the city of Lexington built theirs big enough to be seen by everybody. We're celebrating suffrage tonight, the right to vote, the bedrock principle of our democracy. We're celebrating women's right to vote and I know it all didn't come 100 years ago and we recognize that tonight. We need to continue to recognize that there are still impediments, keeping people from voting that should be able to vote.” 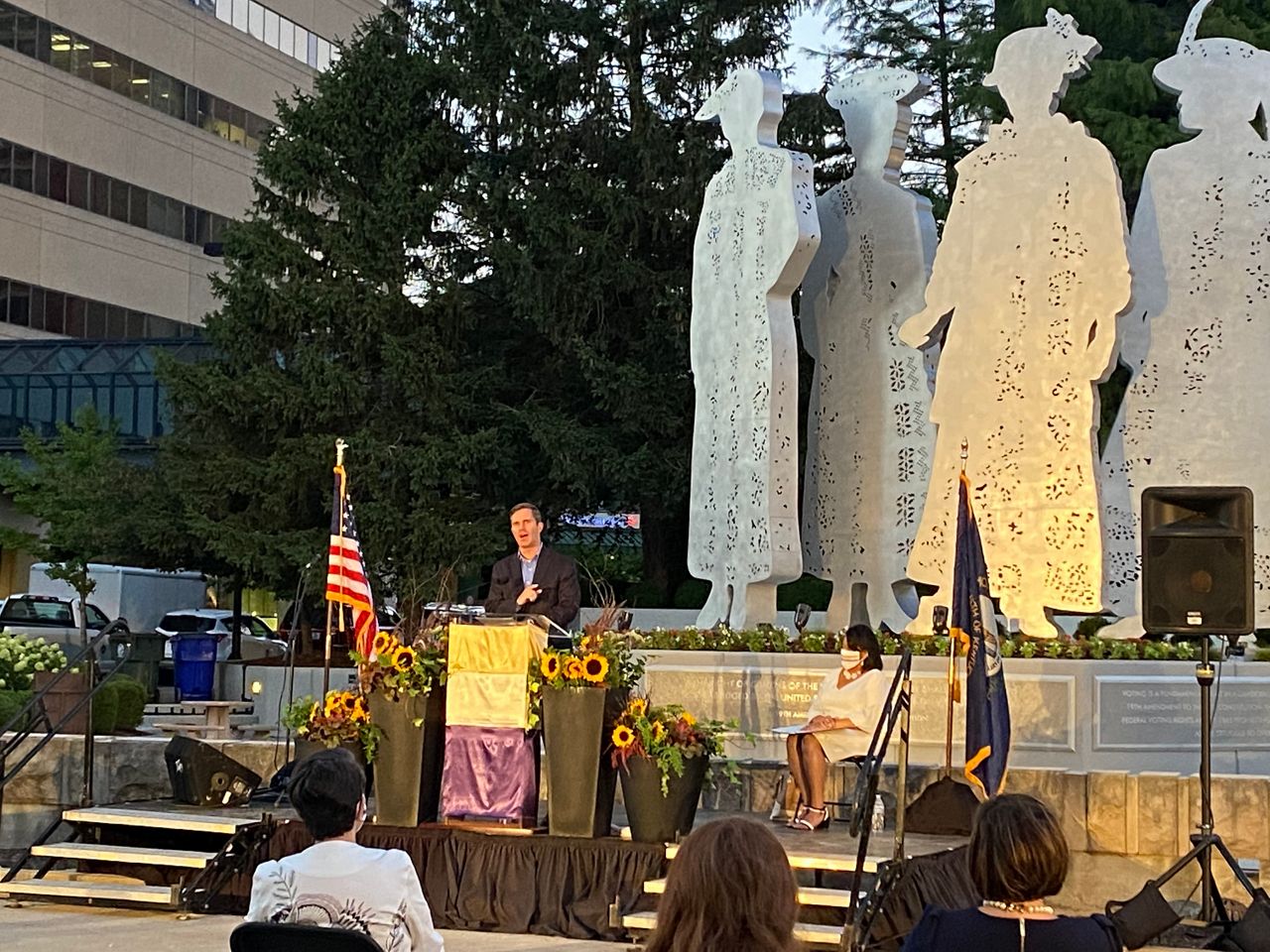 Beshear highlighted the importance of the statue, noting his attendance at the event marked only the second time he has been outside of Frankfort since the coronavirus pandemic began in early March.

Lexington Mayor Linda Gorton said it is fitting such a statue be placed in the city.

“Lexington is shining bright tonight,” said Gorton. “Through this sculpture, we are recognizing the importance of women’s contributions to our city. With Lexington’s 245-year history, those contributions have been many.”

Barr complimented the project’s steering committee for ensuring the project came to fruition.

“I know how hard it was for them to take a dream and an idea that would have such significance for our community and make it into a reality,” he said. “They invited me to be a part of it, and I knew immediately I wanted to be a part of it.”

Three councilmembers, Jennifer Mossotti, Kathy Plomin, and Lisa Higgins-Hord, also spoke during the program. Grygutis and League of Women Voters of the United States President Dr. Deborah Turner commented on the project via pre-recorded video during the ceremony. The program’s master of ceremony was KET’s Renee Shaw.

Councilmembers Mossotti and Plomin have devoted many hours to the project. Working with the Breaking the Bronze Ceiling Committee, they have been raising money to fund the sculpture since 2018.

“It is a long-overdue piece of public art for Lexington and will serve as a constant reminder to current and future generations of women's perseverance in the suffrage movement, and the importance of exercising your right to vote,” Mossotti said, who first identified the need for the sculpture.

Plomin thanked the many donors who have supported the project.

“This was a cool project for our community, and as always, our community came through with amazing support,” Plomin said.

There were 479 people, 81 percent of them women, that donated the nearly $500,000 for the public art project, which began in January of 2019. Gray, now Kentucky’s Transportation Secretary, started the fundraising in 2018 by putting $100,000 for the sculpture into the city’s budget.

Developer Dudley Webb, who gave the sculpture a home in front of the Lexington Financial Center, also spoke during the program.

“It took a lot of people working together on this,” Gorton said. “It is wonderful to have a sculpture such as this that begins to recognize all that women have done to make Lexington a great place to live, work, raise a family and play.”

A public celebration for “Stand” will take place when social distancing guidelines are eased, according to a press release from Gorton’s office.