Together/Alone: How I Learned to Stop Worrying and Quit Hoarding Food

NOTE: This story is part of “Together/Alone,” a column from Spectrum News Chief National Political Reporter Josh Robin that explores life during the COVID-19 pandemic.

My (latest) panic attack over whether we'd have enough food during the quarantine began when I searched online the other day to buy whole wheat flour. I had just used it to bake a pair of bread loaves.

Josh Robin and his wife Manoush with the two bread loaves he made with the last of his whole wheat flour. (Josh Robin, Spectrum News)

Breadless disappointment bubbled into fear. Where have all the flours gone? My mind, addled from claustrophobia and hypochondria, quickly reasoned that if I was out of flour, we’d all soon be in the streets, ripping shreds of stolen baguettes from each other.

This is not to be confused with my panic attacks over fear of martial law; another Great Depression; my own unemployment; death; yadda yadda.

That was then. Now? I’m not particularly hungry, nor particularly concerned there won’t be food — at least for those fortunate enough to have money to shop (which, I recognize, are fewer and fewer of us).

But for many of us food scarcity — and the fear of food scarcity — are problematically interconnected. This is an extremely stressful moment. I would like to give you everything I’ve learned about food security.

To illustrate, I’m going to paraphrase an argument I had with my sister-in-law that kicked off that night of the fruitless flour search, when we found many household goods unavailable for pickup or delivery. Maybe it’s familiar.

Background: During this quarantine, we’re all staying together, my wife and kids and my brother-in-law and sister-in-law. We are avoiding going into supermarkets. To be entirely fair, we have plenty of food for a while — thanks largely to my sister-in-law’s resourceful packing and cooking. Also: I come off like a Neanderthal.

Me: This is going to get worse. We need to stock up more food. Now. For months.

Sister-in-Law: We have way more food than most people. We are going to be fine. And we are all in this together. If we hoard food, that just adds to the cycle and takes away from people who need it.

Me: No. We need to buy more. The food distribution chain is going to be broken when more people get sick or are quarantined. This is about protecting family, watching out for the tribe. Look out for Number One!

S-i-L: No. Society functions by looking out for everyone. We also could be more creative. Waste less. The kids need to finish their meals.

Me: Creative? “Creative” now means “hungry” in a week. Everyone is hoarding. How can we not? You have more trust in humanity than I do.

Fortunately, this argument came just as I started working on a news story about food supplies.

Here are the quotes from an expert that soothed the sirloin-sized crick from my mid-back:

“Don't worry! You will have enough to eat.”

So said Prof. Yossi Sheffi, director of the Center for Transportation and Logistics at the Massachusetts Institute of Technology. We talked the other day.

Here are other takeaways:

But, you say, why are shelves disconcertingly empty?

One, there are of course major disruptions to the supply chain. It’s why farmers in Florida are plowing over produce - or letting it rot. (Normal customers, like schools and restaurants, are closed).

At the same time, people who process meat have gotten sick or even died of complications from the virus, prompting pork and chicken plant closures.

“I would say we are definitely not running out of meat any time soon,” Christine McCracken, an animal protein analyst with Rabobank, wrote in an email. “We have record supplies of beef, pork and poultry available and there has been only minimal disruption to date.

"What is happening is that as demand shifts from foodservice to retail, the industry has had to shift production and distribution to accommodate the change in demand.” 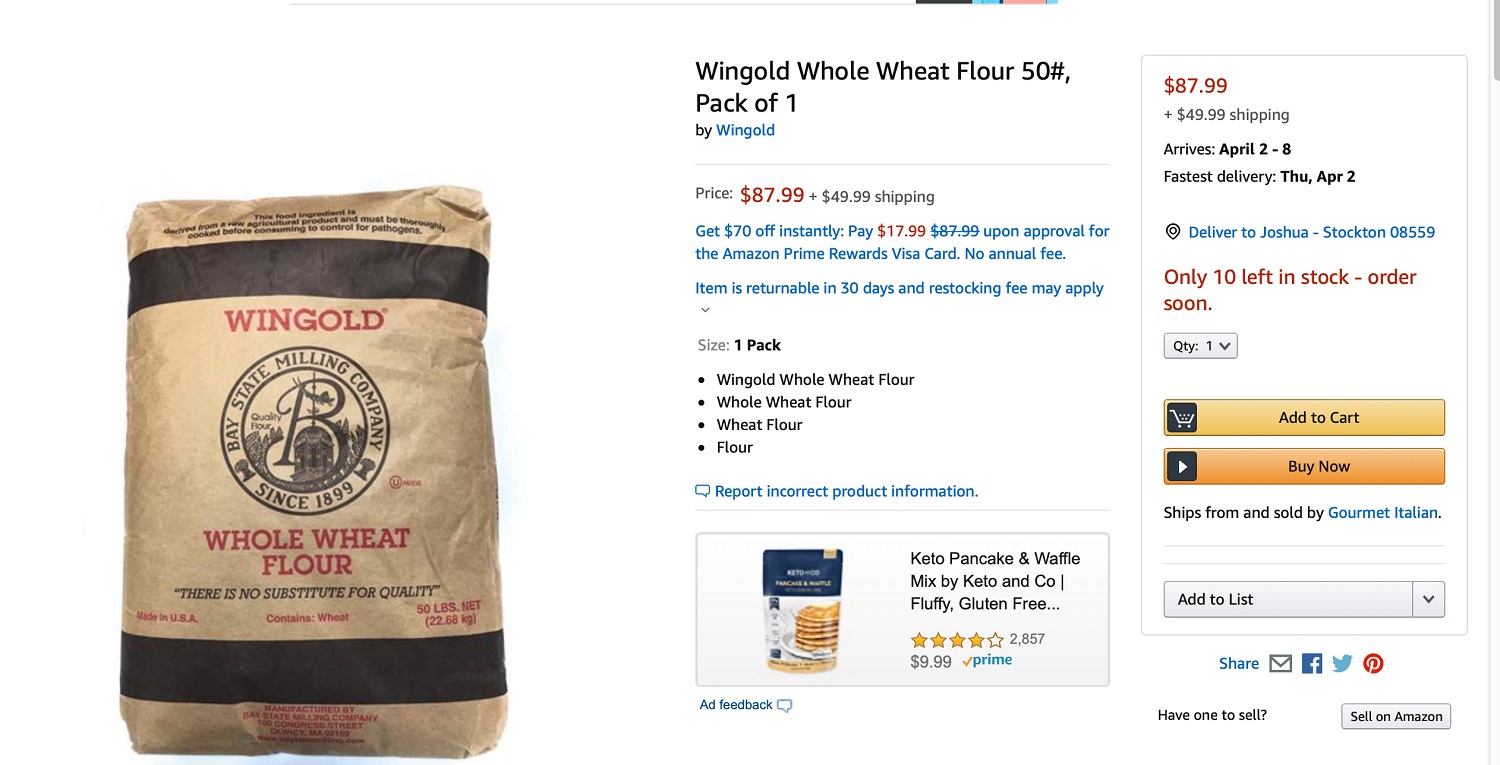 The ad for whole wheat flour on Amazon that fueled this column.

It’s a vicious cycle, and as my talk with my sister-in-law shows, I was part of the frenzy.

Indeed. How much more do I need? The only defensible reason to buy a bit more than normal is because you want to minimize your trips out. So you may have to be more resourceful. People are making their own toilet paper.

You probably don’t have to go that far. But this may also be the time to tap things in the back of your fridge. Also, finish your meal, or don’t cook more than you need. A recent study shows about one third — or 133 billion pounds — of the available U.S. food supply at the retail and consumer levels goes uneaten, with all kinds of moral and environmental ramifications.

The day after my (latest) freak-out, my sister-in-law stocked up again from a local market. We’ve had hearty bean soups for days.

There was also flour — regular, not whole wheat — but it packed the same therapeutic release as I kneaded the dough into another pair of loaves.

With as much “You were right” I could muster, I presented my sister-in-law with a pair of buttered slices. She said they were good.

Wine!  There are all kinds of enticing wine specials now, including wine-to-go from restaurants. I can’t speak to its medicinal value, but a responsible amount of wine over dinner lowers my stress, which certainly can’t be a bad thing. The wine industry estimates the collapse of tourism and hospitality industry meant at least $40 million lost in March and possibly much more.

My suggestion: if you can, order takeout and a bottle or two, and tip handily.

Chores. Before the quarantine, I was getting lax at enforcing my kids’s setting the table and cleaning-up duties when we would have meals together. It was so much easier to just do it myself.

At the risk of sounding preachy and smug, I’m gently enforcing again — and after some pushback at first, I’m now pleasantly finding less resistance than expected in this “we’re in it together” moment.