6 Dead, Including Gunman in Shooting at Miller Brewery in Milwaukee

MILWAUKEE (SPECTRUM NEWS) -- Milwaukee Police Chief Alfonso Morales confirmed that a 51-year-old man shot and killed five employees of Molson Coors before killing himself Wednesday afternoon at the Miller Brewing campus. The man was a former employee of Molson Coors.

There are no other injuries to any other employees.

Our hearts go out to the families of those whose lives were senselessly taken, all of the folks and workers at Molson Coors, and the Milwaukee community as we grapple with yet another act of gun violence that will have long-lasting consequences for this community and our state.

“Earlier today a wicked murderer opened fire at a Molson Coors plant, taking the lives of five people," President Donald Trump said at the start of a press conference addressing the Coronavirus, "It’s a terrible thing, and our hearts go out to the people of Wisconsin."

Gavin Hattersley, President & CEO of Molson Coors sent this email to employees in the wake of today's tragedy. 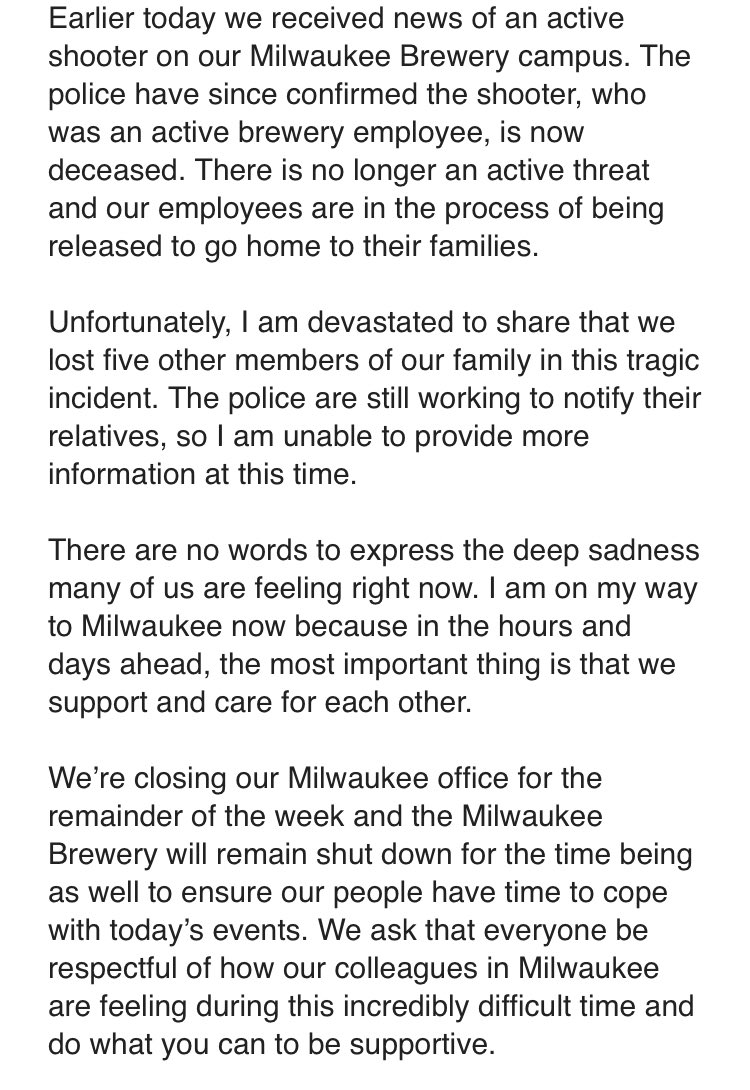 Hattersley added that Molson Coors' Milwaukee office will be closed for the remainder of the week and the Milwaukee Brewery will shut down "for the time being."

Chief Morales said the victims' names will be released to the public in 24 to 48 hours. Some of the victims' relatives are coming into town and ask that their privacy is respected at this time.

Milwaukee Mayor Tom Barrett has confirmed that multiple people have been killed at Miller Brewery, including the shooter.

Milwaukee Police say there is no active threat at the Molson Coors campus, but it is still an active scene.

The MPD also tweeted this at 4:45 p.m. CST letting people know where the staging area is for families of the employees at MolsonCoors.

Update regarding the critical incident that occurred on the 4100 block of West State Street.

The family staging area for the employees of Molson Coors will be in the Harley Davidson Parking Lot at 35th Juneau Ave.

Police say there was a "critical incident" at the MolsonCoors facility on State Street in Milwaukee.

It happened around 2:30 p.m. Wednesday afternoon.

An employee told Spectrum News 1 an alert went out about an active shooter and advised everyone to find a safe place to hide.

Other employees told us that they were placed in a safe location then were asked to sign out and released to go home this afternoon following the "critical incident".

Milwaukee Police sent out this tweet telling people to stay clear of this area and to use Highland Ave. as an alternate route.

MPD is investigating a critical incident in the 4000 block of W. State Street. Please stay clear of the area at this time.

It was founded in 1855 and merged with Coors Brewing Company to form Miller Coors in 2008.

The company is now owned by Molson Coors beverage company.

According to USA Today, last fall Molson Coors announced it was moving hundreds of corporate office jobs to Milwaukee as part of a restructuring plan.

That resulted in the loss of hundreds of jobs throughout the company.

A Molson Coors spokesperson told USA Today then that the company has 610 corporate jobs and about 750 brewery jobs in Milwaukee.

Those new corporate positions are expected to arrive in Milwaukee this summer.