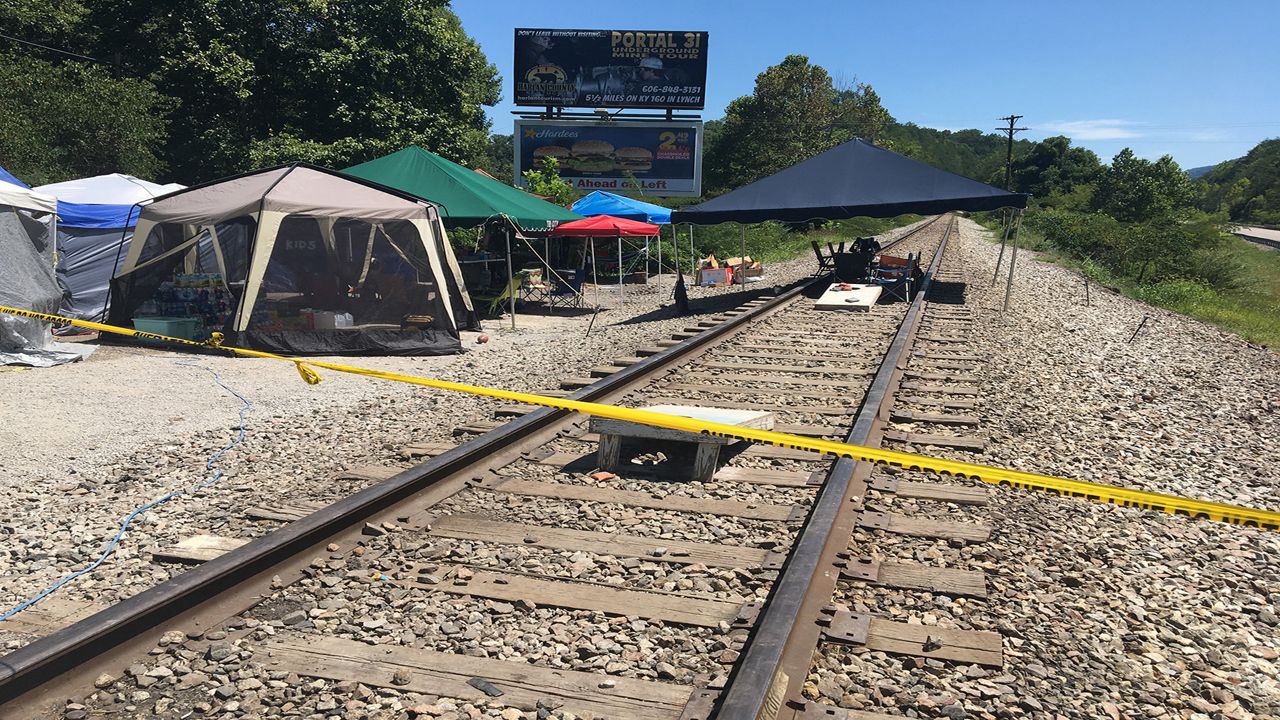 HARLAN COUNTY, Ky.-- One hundred or more former Blackjewel coal miners have been blocking a train loaded with coal from leaving the mine for more than three weeks. There's no end in sight to the protest, until they are paid some $2 million in back wages, after Blackjewel went bankrupt. Most of them say they are owed pay for three weeks of work they did before the bankruptcy.

On Friday, Teamsters took trucks to the portion of Highway 119 beside the campsite at the tracks to block traffic for their cause. The miners that started the blockade hope people will see it as a movement, instead of just one campsite demonstration.

"The coal was taken from my mine," explains one of the blockade founders, Jeffrey Willig, "so we decided to stop it because we had not been paid."

"It's for every blue collar worker that's ever been stepped on," Willig says. However, he does want to get the money he says is owed him. He supports a family of six children; Willig says his bank account has been frozen, being thousands of dollars in the hole.

Gary Lewis is another former Blackjewel employee who's spent time blocking the tracks.

"To work their employees for three weeks and then try not to pay 'em, I mean it's not right no mater what you do for a living," says Lewis.

Attorney for the miners, Joe Childers, says they are blocking 75 loaded cars from carrying coal from the mine, plus more coal to be loaded, amounting to about $2 million. Childers says there's been an approved sale of Blackjewel to another company, Cooper Glow. The new company has pledged $450,000 aside to cover the back wages, but that's not enough, Childers says.

"The Blackjewel miners blocking the coal train in Harlan County are engaging in effective civil disobedience, the likes of which have not been seen in many decades. It is working. The coal being embargoed, worth over $2 million, has been classified as 'hot goods' by the U.S. Department of Labor, and DOL has asked the bankruptcy court to prohibit the sale of this coal in interstate commerce until the miners are paid their back wages," the Lexington-based attorney explains.

Lawmakers are trying to close the loophole in law that allowed the situation in the first place. Attorney General Andy Beshear (D- Kentucky) has joined onto lawsuits filed by other attorneys general to recover the owed wages for the miners. He's also investigating the Labor Cabinet, which he says ultimately failed the miners.

"What has happened to these miners is wrong. It's the worst bankruptcy I've ever seen, and it's put them in a position to where for many weeks not only were they not paid, but they couldn't access their 401(k)s and couldn't qualify for other help," Beshear says.

Under Kentucky law, employers like Blackjewel and other mining companies that have been doing business in the state for less than five consecutive years are required to furnish a performance bond to the Labor Cabinet to assure the payment of wages if the employer ceases operation. The bond amount should be enough to cover the company’s payroll for four weeks.

However, the Attorney General's Office claims the Labor Cabinet did not enforce that and said there's no mechanism in place to detect when a new company that's supposed to post bond has opened.

"If the Labor Cabinet had done its job, there would be a bond in place specifically for them that would be big enough to cover everything that was owed," Beshear says.

Sen. Johnny Ray Turner (D- Paintsville) has prefiled a bill for the 2020 legislative session, to close a loophole that allowed the Blackjewel situation.

"The loophole is there, and so I'm glad that we'll be closing it. I'd be happy to sign it. I imagine it would have overwhelming support," Governor Matt Bevin (R) said in an interview.

Spectrum News 1 reached out to attorneys for Blackjewel on multiple occasions with calls and emails, but has not had any response to our requests for comments.