A rendering showing the proposed view of the Splash! water play zone in Lexington, Ky. (City of Lexington)

Lexington dives into history with plans for Splash!

LEXINGTON, Ky. — Lexington is putting an aquatic twist on history with plans for Splash!, a water play zone that will tell the story of Col. Charles Young, the first African American to earn the rank of colonel in the United States Army. A news release from the City of Lexington announced Tuesday that Splash! will be in Charles Young Park, which is downtown in the East End neighborhood.

"We are bringing new life to Charles Young Park and Community Center,” Mayor Linda Gorton said in the news release. “We have already put in a new playground and resurfaced the basketball court. Town Branch Commons Trail will soon run right by the park and Splash!, making access convenient for nearby neighbors to walk or cycle to the facilities.”

Splash! will be a sizable water play feature, and the first of its kind in downtown Lexington. It has been designed for a wide variety of ages and abilities, with plenty of input from neighbors, including neighborhood children.

“Splash! will be treasured and enjoyed by the families of the East End because they helped design it. Similar to the new playground in Charles Young Park, every aspect of this water play feature was envisioned and developed by neighborhood residents through community engagement and partnership,” said Councilmember James Brown in the release.

According to the City of Lexington, the water feature is designed to conceptually illustrate the life of Charles Young while also educating visitors about the rich cultural history of the East End neighborhood and the park, which opened during the segregation of the 1930s and was the city’s second outdoor public recreation space for African Americans.

Recently, the U.S. Department of Defense awarded Young with an honorary promotion to Brigadier General. In 2016, the Charles Young Center was placed on the National Register of Historic Places. 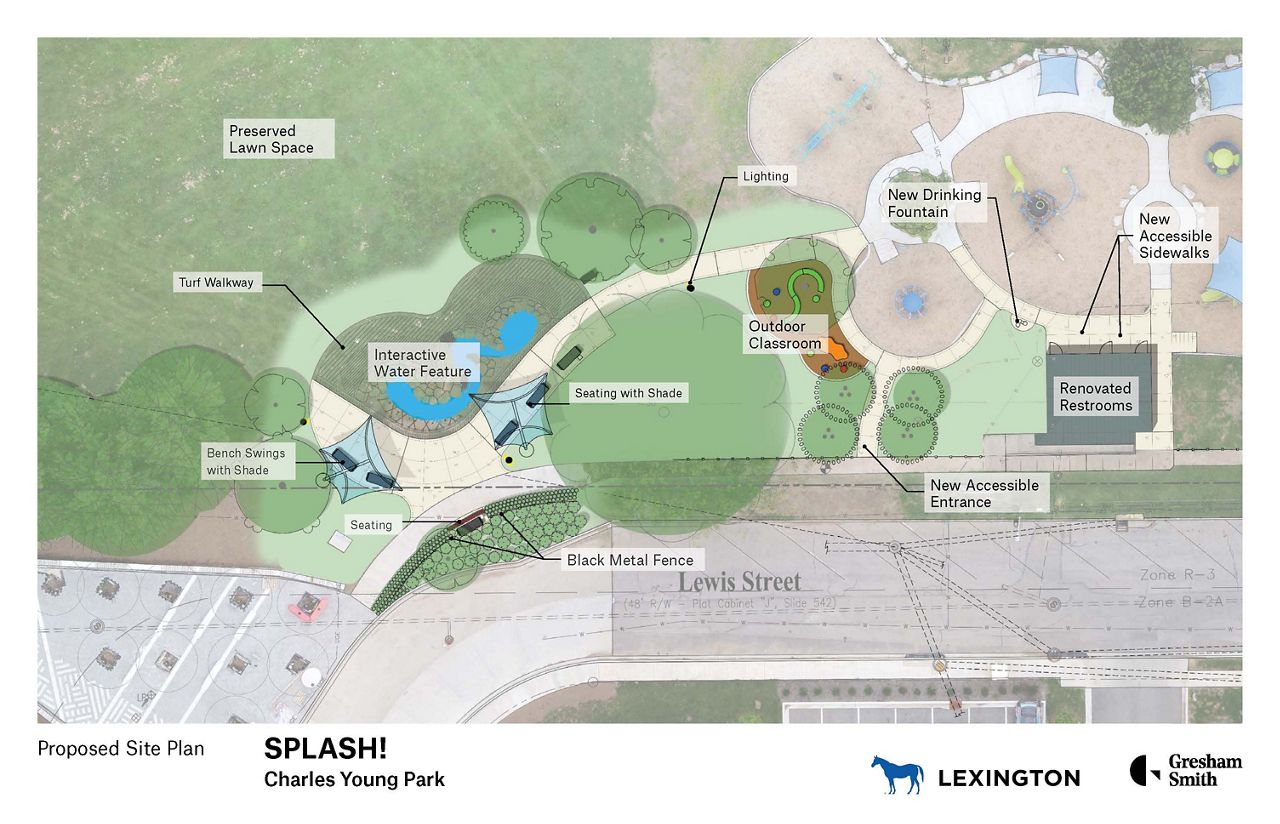 A proposed site plan for the Splash! water play zone in Lexington, Ky. (City of Lexington)

Splash! will also draw upon the Bluegrass landscape, mimicking karst, creeks and streams found in the rural area. The release states that the water play area will use recirculating water to include “water bubbling up from stones, crossing water arches and a constant shallow stream surrounded by stepping stones and artificial turf mounds for play or sitting.”

Plans call for the addition of trees to cool off the area and native plantings. Additionally, the project includes renovation of the existing restroom building.

The cost of the privately funded project is $1.15 million, including a grant of $900,000 from Blue Grass Community Foundation with support from charitable donors and fund holders.

“Kentucky American Water has been a strong supporter of Lexington’s parks for decades because we know that, just like quality water service, parks play a significant role in a community’s quality of life,” said Nick Rowe, president of Kentucky American Water. “With funding provided in part by the American Water Charitable Foundation, Splash! at Charles Young Park will be a wonderful place for people of all ages, backgrounds and physical abilities to enjoy water-based recreation while learning about conservation and environmental stewardship in a safe and sustainable manner.”