LOS ANGELES — Dee Dee Ramone once sang that he did not want to be “buried in a pet cemetery”, but now the gravesite of The Ramones founding member and bass player has become a veritable wildlife sanctuary at the Hollywood Forever Cemetery.

It all started at the beginning of the pandemic when Pleasant Gehman and Coyote Shivers started feeding a small group of black ducks, which they dubbed the Ramones, after the iconic punk rock band. Then word spread throughout the avian community, and now the daily feedings are like a mallard mosh pit. 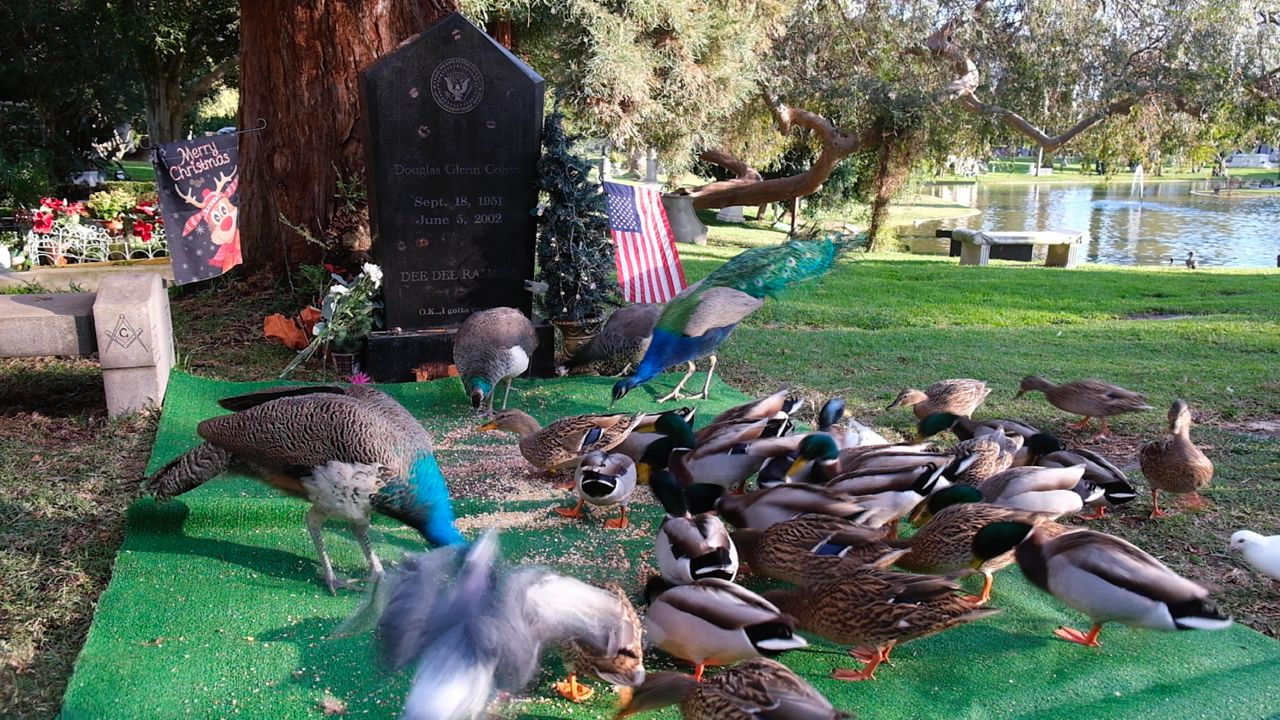 The cemetery hosts a surprising amount and variety of winged wildlife including swans, peacocks and geese. (Spectrum News 1/Kristopher Gee)

“One day there was tons of them, so it's constantly changing here the amount of birds we have,” Gehman said.

An avid Ramones fan, Pleasant has been coming to the Hollywood Forever Cemetery since the 1970s, visiting Dee Dee Ramone’s grave since he died in 2002. These days, she comes daily with partner Coyote Shivers to feed and party with the birds whose numbers are growing.

“Basically, it went from five to anywhere between like 35 and a hundred a day,” Gehman explained.

But it's not just the ducks that come. The cemetery hosts a surprising amount and variety of winged wildlife including swans, peacocks, geese, and even the resident feral cats have been getting in on the free buffet.

Gehman said coming to the cemetery has been therapeutic for her, especially during the pandemic.

“If you’re sad or, you know, full of anxiety, like how it was in the summer of 2020, this was like an instant mood changer,” she said.

And to ring the ducky dinner bell the team created a cover version of the Ramones’ “Blitzkrieg Bop” called the “Duckskrieg Bop” with the “Hey! Ho! Let's go!” chorus now sung in quacks sampled from the birds themselves.

Gehman said the lead vocal is by a duck they nicknamed “Loudmouth” because her quacks can be heard clear across the cemetery.

Shivers blasts out their ducky punk anthem through a portable Bluetooth speaker which brings the birds waddling almost immediately.

Shivers said he probably gets more joy out of this than the ducks do, and hopes he and Gehman have started a new LA tradition that can be passed down through generations.

“Like, you know, 50 years from now, there's some kids and everyone, and I'm long gone, but the joy of watching the ducks march to Dee Dee every day continues. I'd love to see that,” Shivers said with a smile.

And although Gehman and Shivers have been involved in many different kinds of creative projects over the years, Gehman said, “Coyote and I both agree that this is probably the best thing we've ever done.”

The Ramones Ducks have been blowing up on social media and although Gehman and Shivers fund their venture mostly out of their own pockets, for them, it's a small price to pay for such joy, and as Shivers said, the Ramones and ducks together…what could do better?