Jack is back: Disneyland kicks off Halloween season

ANAHEIM, Calif. — Next to a colorful decorated wall in the Paradise Gardens at Disney California Adventure, visitors could write on a piece of paper and hang up personal notes to remember their loved ones.

The memory wall in the seasonal themed Plaza de la Familia allows people to commemorate and remember the dead. Given the current pandemic situation, it's taken on a greater meaning.

"The memory wall to me is the heart of this plaza," said Dan Torres, senior art director at Walt Disney Parks and Resorts during a media preview of Disneyland's new Halloween offerings. "I'm overjoyed when I see guests embrace this opportunity to pause in their day and remember and celebrate their lost loved ones. That really is the true meaning of the Day of the Dead."

"It's very emotional," he said. "It's very spiritual."

After being closed for Halloween and almost all of last year due to the coronavirus pandemic, Disneyland kick-started its celebration, which runs Friday through Oct. 31. 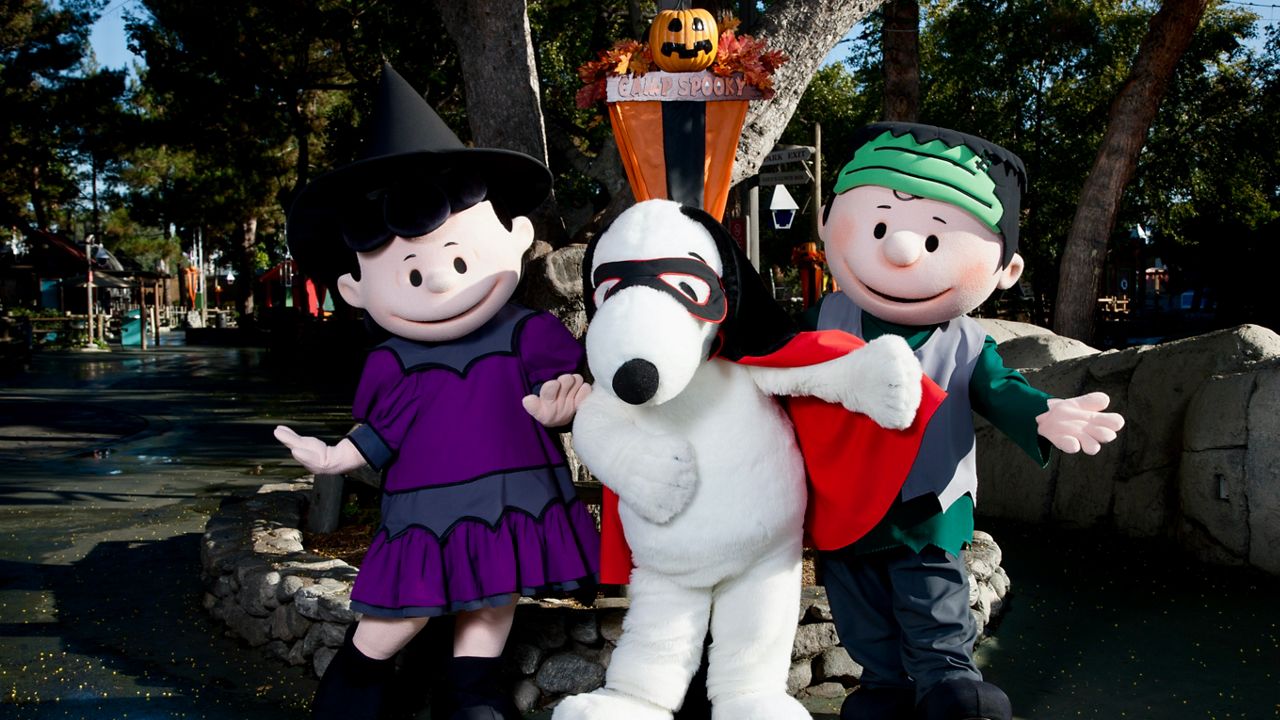 In the coming weeks, other theme parks across Southern California are also ramping up their offerings for the spooky Halloween season. Parks are decorating with Halloween-themed items and offering special ticketed Halloween events.

Halloween Horror Nights at Universal Studios Hollywood, for example, will open on select nights starting Sept. 9. Six Flags Magic Mountain is bringing back its popular Fright Fest Halloween event. Over in Carlsbad, Legoland has a Brick-or-Treat event for little ones.

In Buena Park, Knott's Berry Farm is turning into Knott's Spooky Farm during the day on weekends starting Sept. 25 through Oct. 31 and hosting its famous Knott's Scary Farm beginning on Sept. 16.

Disney is also hosting a special ticketed event on select nights starting Sept. 9. The Oogie Boogie Bash is where visitors can see famous Disney villain mascots and line up for special treats. The event at Disney California Adventure is sold-out. 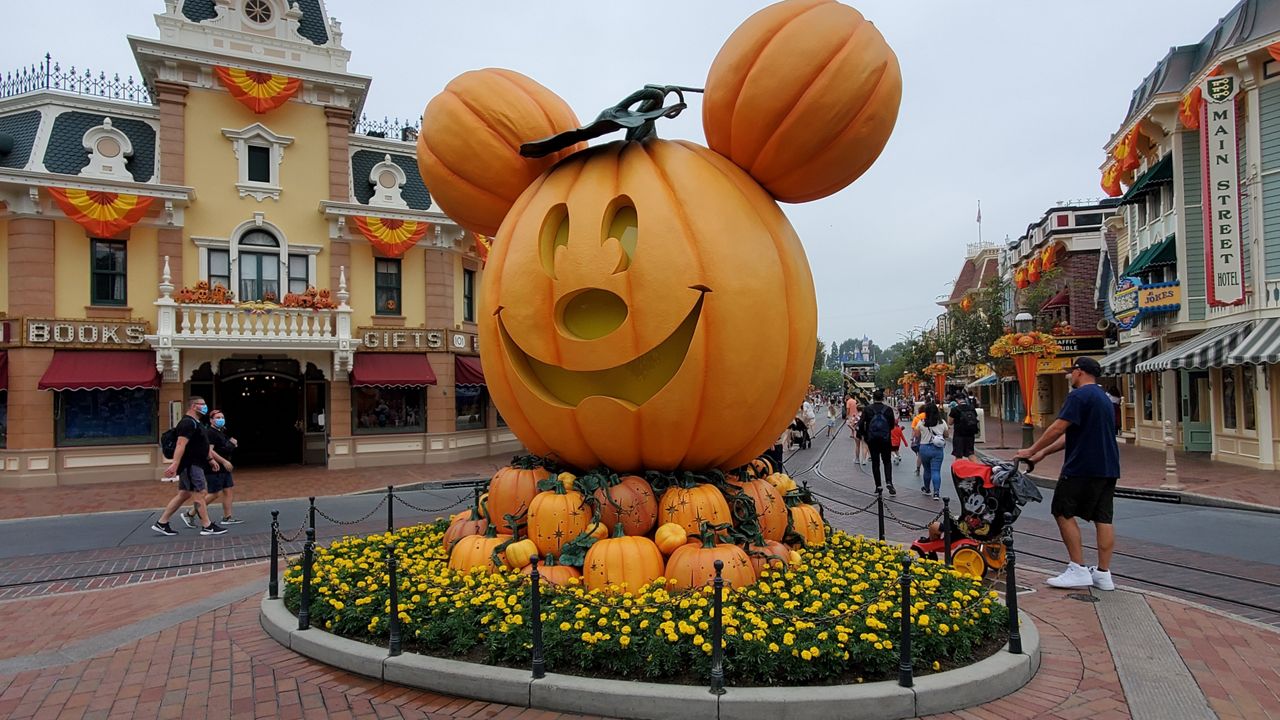 At Disneyland, Jack Skellington the Pumpkin King is back, and so is the rest of the Nightmare Before Christmas ghouls at the re-themed Haunted Mansion Holiday attraction — something Disney has done for 20 years.

Even Pluto gets into the fun — one mascot wearing a cape was seen with its arms stretched out like a zombie.

On weekend nights during the Halloween season, Disney will bring back Halloween Screams, a fireworks show with villain-themed special effects.


Over at Disney California Adventure, a large Oogie Boogie with a neon green outline towers over the entrance marquee and greets incoming visitors. Once inside, visitors will see purple and black banners on lampposts and a headless horseman statue on display next to the Carthay Circle water fountain.

In Cars Land, Mater dresses up as Count Mater. The Guardians of the Galaxy: Mission Breakout ride turns into Monsters After Dark in the late afternoon in the Avengers Campus.

The Paradise Garden has been transformed into Plaza de la Familia, a celebration of the hit movie "Coco" and the Mexican holiday, the Day of the Dead.

There, visitors can take a photo op with Miguel, strung up as a puppet with a guitar, and can also take photos in front of the Arbol de la Vida (Tree of Life), watch the Mariachi Divas, and skeleton puppeteers perform. 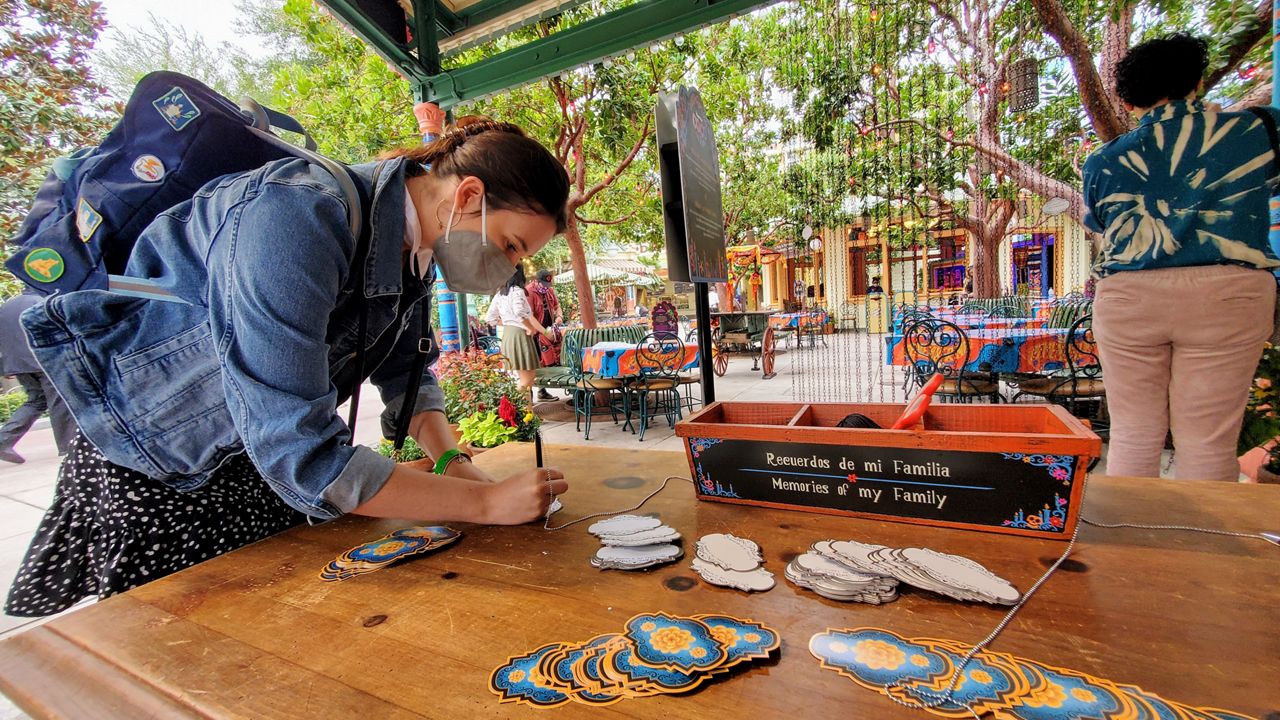 For Susana Talbert, creative director at Walt Disney Imagineering, Plaza de la Familia — which began in 2017 — is a place where families can gather and experience multigenerational and multicultural experiences.

This past year has been challenging, so it was important for her team to create immersive experiences that bring families together, Talbert said.

"We know that these have been really hard times, and we hope that everyone will take great comfort and experience the joy of all these different interactive experiences that we're offering," said Talbert. "Because at the end of the day, they all speak to a universal core value which is the significance of family, la familia."