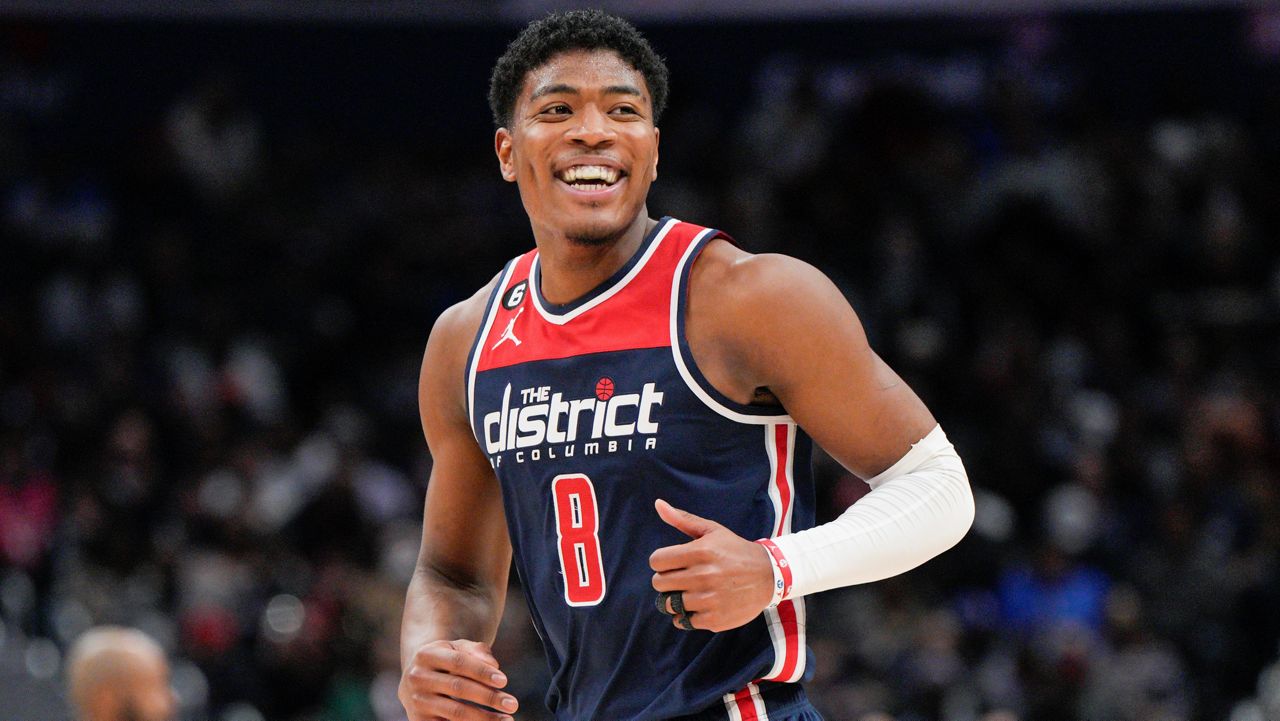 Washington Wizards forward Rui Hachimura (8) smiles after scoring against the Orlando Magic during the second half of an NBA basketball game, Saturday, Jan. 21, 2023, in Washington. (AP Photo/Jess Rapfogel)

The Los Angeles Lakers acquired former lottery pick Rui Hachimura from the Washington Wizards on Monday in exchange for Kendrick Nunn and a package of second-round draft picks.

Hachimura and the Wizards did not agree on a rookie extension before the season started, which prompted speculation that the Japanese power forward wouldn’t be in their long-term plans.

And it makes sense for the Lakers to be seeking help. At 22-25, they’re in 12th place in the Western Conference, but entered Monday just two games behind the Los Angeles Clippers for the No. 6 spot and four games back of the New Orleans Pelicans for No. 4 in the West — with LeBron James averaging nearly 30 points per game and a belief that Anthony Davis will be back from injury sooner than later.

“Adding both size and depth to the wing position has been a goal, and the chance to accomplish that by acquiring a player with Rui’s two-way skills and upside was an opportunity that doesn’t present itself often,” Lakers general manager Rob Pelinka said.

"To be able to add a talent of his stature, it was a no-brainer." Darvin Ham on the acquiring of @rui_8mura to the #Lakers. pic.twitter.com/Fgjf2AJV3J

The Wizards got second-round picks this year, 2028 and 2029, plus a trade exception.

“Kendrick has shown the ability to be a solid perimeter threat who can provide instant offense as a reserve,” Wizards President Tommy Sheppard said. “He has proven to be a valuable contributor during his young career, most notably as key role player helping Miami make a run to the Finals.”

Los Angeles has hit only 33.7% of its 3-pointers this season, ranking near the bottom of the NBA. Hachimura is hitting 34% of his 3-point shots this season after hitting 44.7% last season, but he excels in the catch-and-shoot situations that are often created for James' teammates by his penetration and playmaking.

Hachimura is also a standout midrange shooter, while his length should provide the Lakers with an option against teams with taller wing players who have occasionally exploited Los Angeles' lack of mobility on the perimeter.

Hachimura has appeared in 30 games for the Wizards this season, all off the bench, averaging 13.0 points on 49% shooting. He was the No. 9 pick in the 2019 draft out of Gonzaga. Washington is 20-26 after signing star guard Bradley Beal to a big contract in the offseason, and the Wizards were 1 1/2 games behind the final play-in spot heading into Monday's games.

Beal has dealt with injury problems, and now the Wizards are without Kristaps Porzingis, who sprained an ankle Saturday night. Washington announced Monday that Porzingis is week-to-week because of that injury.

Hachimura equaled a career high with 30 points for the Wizards on Saturday in his final game before the deal. He had no comment when asked afterward if he'd requested a trade. He started 105 games in his first two seasons but only 13 since then.

Hachimura will be reuniting with penetrating guard Russell Westbrook, his teammate in Washington during the 2020-21 season. Hachimura famously said Westbrook was his “senpai” — his “leader” in Japanese.

Nunn is in his fourth NBA season, his second with the Lakers, though he missed all of last season with a knee problem before activating his $5.25 million option for this season in the final year of his deal. Nunn has averaged 6.7 points in 39 games this season, 37 of them in a reserve role, with wildly inconsistent contributions offensively. He has not matched the offensive success he had in his first two seasons with the Heat.

The Lakers soon will have a glut of guards with Lonnie Walker and Austin Reaves due to return from injury, and Nunn's departure alleviates the logjam. Westbrook, Dennis Schröder, Patrick Beverley and rookie second-round pick Max Christie also have logged significant minutes when healthy this season.

The Lakers have given no definite timeline for Davis' return, but coach Darvin Ham said Davis “looked great” in a full scrimmage last weekend. If he continues to improve, Davis could return during the Lakers' upcoming five-game road trip, which begins Saturday in Boston.