In Los Alamitos, students will need a permit to ride e-bikes to and from school

Brucki has seen e-bike riders weaving in and out of traffic, wearing earbuds on both ears, having a passenger sitting on the handlebars, speeding, or riding on the other side of the road.

All against the law.

Usually, Brucki stops the offending student and gives a warning.

But starting in February, Brucki and the rest of the Los Alamitos Police Dept. have sent out a directive to issue road citations that could cost the e-bike riders or the parents as much as $500 for each infraction.

Los Alamitos Police Traffic Sergeant Shaun Krogman said it's only a matter of time before a severe accident with a child on an e-bike happens.

Children using e-bikes are a growing concern for the police department, he said.

"I don't want to go to a traffic accident scene and have to tell your parents that you are either in a hospital with a serious injury or dead," said Krogman to a room full of students at Oak Middle School in Los Alamitos. 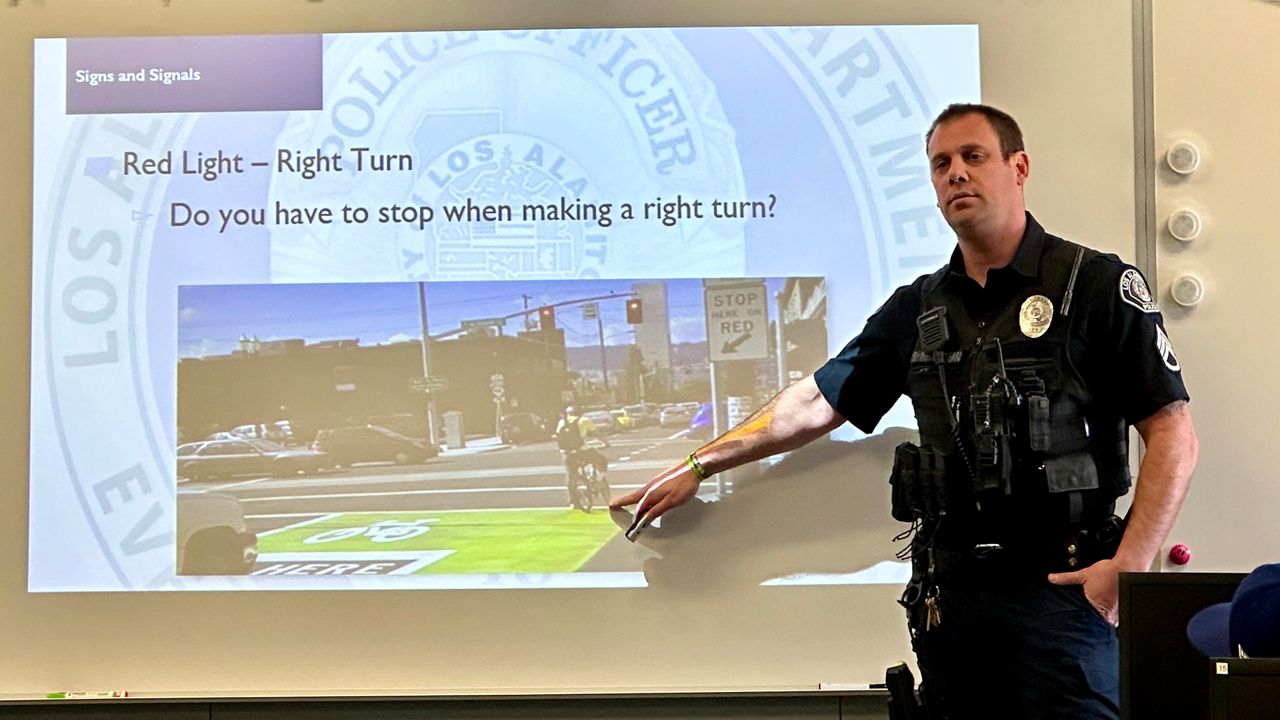 As e-bikes become as ubiquitous as two-wheeled pedal bicycles, police here and officials in the Los Alamitos Unified School District are grappling with how to deal with the influx of students speeding up and down the city streets through car traffic with motorized bicycles that can travel up to 26 miles per hour, to and from their school campus.

E-bikes, bicycles with electric motors that propel the rider forward without pedaling, have become a popular form of transportation in recent years.

Once popular with boomers and seniors as a form of low-impact exercise, coronavirus pandemic-related lockdowns fueled the popularity and sales of e-bikes across the age board.

With its ease of use, reliability, mobility, and environmental friendliness, riders of all ages, according to Deloitte, have hopped on the e-bike craze.

According to Deloitte, annual e-bike sales in North America and Europe combined nearly doubled from 2018 to 6.4 million in 2021.

During the first two years of the pandemic, e-bike sales in North America grew 26% year over year, outpacing electric vehicles.

But there are growing risks.

According to a study by the U.S. National Transportation Safety Board, released last month, at least 119 people died while riding an e-bike or electric scooter from 2017 through 2021.

The death data from the NTSB is hazy, given that no local or government agency has ever before tracked the death of people while riding an e-bike or e-scooter. Meanwhile, there are about 1,000 bicycle-related death and 130,000 injuries a year in the U.S.

Locally, the Children's Hospital of Orange County has found a rise in pediatric injuries related to children and teens riding e-bikes.

She said some of the most common and more severe e-bike injuries CHOC doctors have seen include concussions, extremity fractures, skull fractures, and facial fractures. The injuries were caused by the rider falling off the e-bike, crashing into a static object, or being struck by a car or a pedestrian.

"We first became concerned with the [e-bike] trend in 2021," said Ferguson to Spectrum News. "The following year, we saw a huge increase in the number of patients we were seeing and in the severity of their injuries due to e-bike accidents."

"Many of these injuries require surgery and admission to the hospital for an extended stay," she said, adding that no deaths have occurred yet. 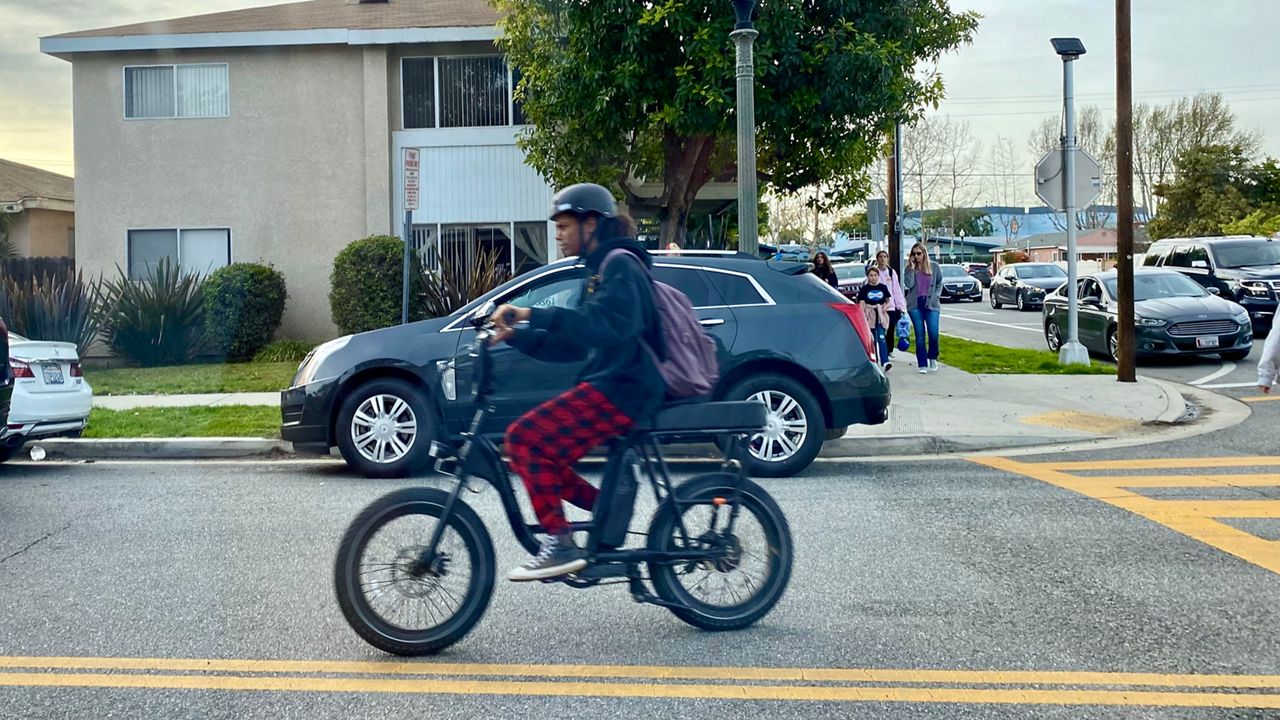 The increased number of children and teenagers on e-bikes in Orange County neighborhoods has also become a divisive subject on social media. It is common to see complaints about young unsafe e-bike riders from parents and residents on Nextdoor or other community pages on Facebook.

One parent on a Huntington Beach community page wrote:

"I’m just sick and tired of all of the spoiled little brats racing around HB on their e-bikes...They were wearing black jackets, no helmets and no reflective clothing. What in the world are parents thinking when they buy those blankety blank bikes for their kids!!"

It's easy for people to reason with them.

On a recent day, a news reporter observed a middle school-aged student heading to Oak Middle School in Los Alamitos on an e-bike speeding on the opposite side of traffic. One student on an e-bike had another passenger sitting sideways on the top tube frame as they rode on the sidewalk, rushing to the school.

With parents in cars rushing to drop off or pick up their children from school and, at the same time, other children on electric bicycles riding to and from school daily, Garcia said, "as a mother, there is a fear [of an accident]."

“As educators, our No. 1 priority above everything else is the safety of our kids. And kids cannot be safe without the tools and understanding of what that means and what it takes to be safe,” said Garcia. “We can’t hold kids accountable if they don’t know the rules of the road.”

So, at the beginning of the school year, Garcia said the school district partnered with the Los Alamitos Police Department to create a new safety course to educate students using e-bikes and their parents to learn safe roadway behavior.

The course only targets the school district’s two middle school campuses - Oak Middle School and McAuliffe Middle School. And it only applies to e-bikes, not motorized scooters. The middle schools are where they see the most concentration of student e-bike riders.

In December, school officials sent out a bulletin to parents that by Feb. 1, students using an e-bike as transportation to and from the middle school campuses must have a permit sticker displayed on their e-bike.

Students that do not have a permit will not be allowed to park their e-bikes on campus, the bulletin read, and the school will notify the parent or guardian to pick it up.

To get a permit, the students must take an hour-long safety course headed by members of the Los Alamitos Police force.

Adriana Angulo, a communications coordinator at the Huntington Beach City School District, said her district has not yet developed any districtwide policies related to e-bikes but is working closely with Huntington Beach Police Department and other school districts in Huntington Beach to educate students on e-bike safety.

"It takes a community partnership with parents, schools, and law enforcement to ensure students know the safety rules and follow them while riding bikes to school," said Angulo to Spectrum News. "As we continue our work with HBPD, the district will consider policies that align with their recommendations."

Garcia said she pushed for the new safety course because she nor her other administrators were "confident that kids fully understand what it means to have that huge responsibility of being behind the wheel.

"We found that there is a dire need for an understanding of the rules of the road and how to keep themselves and others safe," she said.

During one of the hour-long classes, Krogman and Brucki, the Los Alamitos Police officers, showed videos of kids and teens on e-bikes and crashing.

Many kids gasped when they saw a video of a teenager performing a wheelie on the opposite side of the road and getting struck by an on-coming vehicle.

The officers also went over the city rules of the road.

Every city is different, said Krogman.

E-bike riders also cannot go faster than traffic. If traffic, for example, is at a crawl of 10 miles per hour, e-bike riders cannot speed on through.

“You must go with the flow of traffic,” the officers said. “No cutting across.” 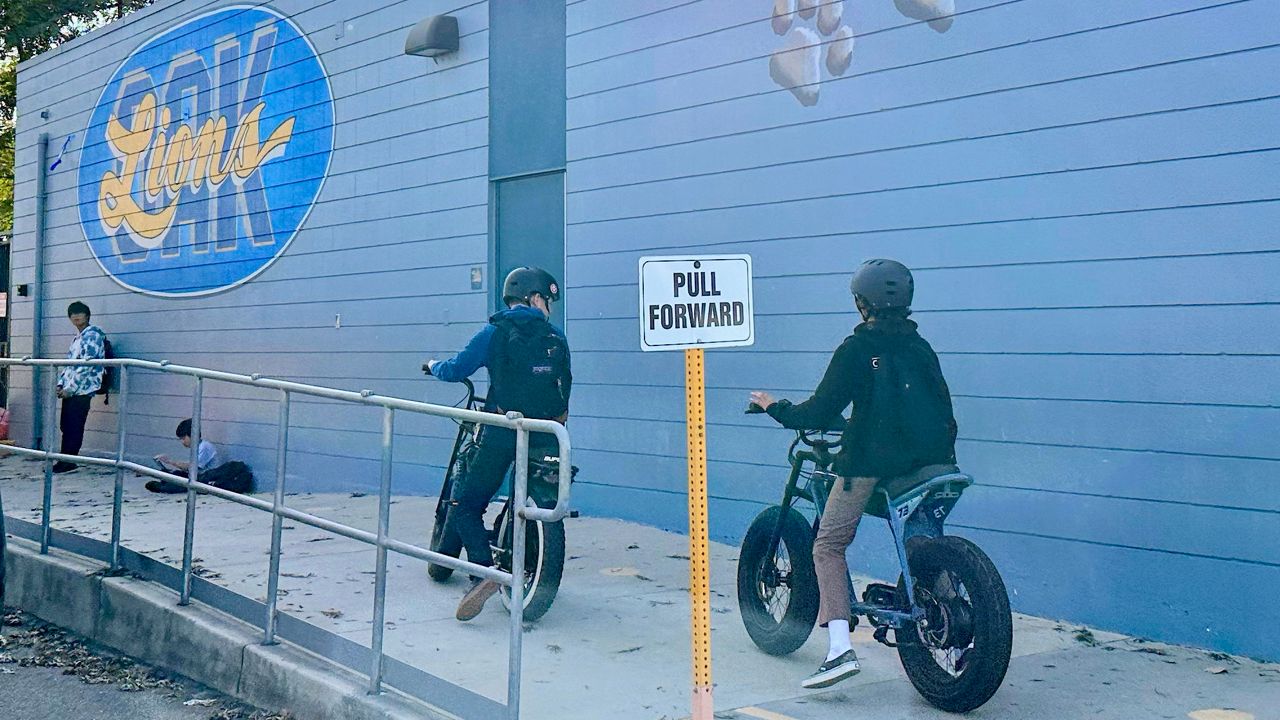 Brucki added that just like a motor vehicle, children on e-bikes could not use their phones, have a passenger without having a designated seat, or cover both ears with earbuds or headphones while riding an e-bike.

They went over fines for infractions. Krogman said that failing to stop at a stop sign could result in a $500 citation.

Additionally, the school has prohibited students under 16 from riding a Class 3 e-bike that can go as fast as 28 miles per hour.

“Those e-bikes will be confiscated,” said Garcia.

Garcia said over 100 students and parents had attended the two e-bike safety course workshops at Oak. Once the class is completed, students will receive a certificate and a permit to display on their e-bike, school officials said.

During one class, one student said taking the safety course would allow their parents to trust them more when they ride an e-bike.

Garcia said a school official would enforce the permit daily.

Ultimately, she said, she hopes her students will take the course seriously and become safer e-bike riders, whether at school or in their neighborhood.

“We don’t want a tragedy to provoke movement,” said Garcia. “We want to definitely be proactive.”