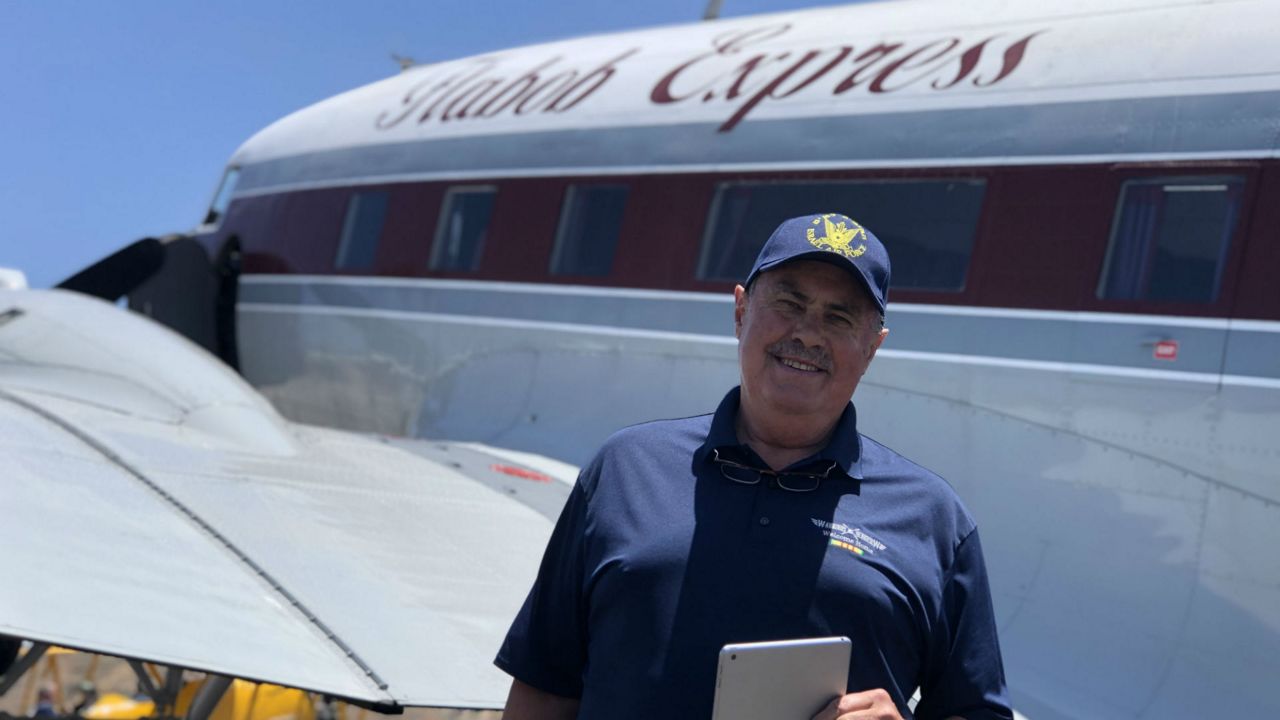 JURUPA VALLEY, Calif. – Honoring veterans this Memorial Day has been difficult due to closures from to the coronavirus.


The coronavirus has grounded Memorial Day plans for a lot of Southern California residents, but a group of pilots like Vietnam veteran Jon Goldenbaum took to the skies to make sure that fallen service members and medical frontline heroes are remembered and celebrated on this unprecedented Memorial Day.

“Generally in the aviation world we do have Memorial Day fly byes and events every year. Almost all of them obviously are cancelled this year,” Goldenbaum said.

Based at Flabob Airport in Jurupa Valley, Goldenbaum has been a pilot for 57 years and has been flying this 1943 DC-3 for the last 17. It’s one of 18 vintage planes that flew over Southern California on Monday.

“It’s very important to me as a combat veteran myself for the United States to be able to honor that serve their country,” Goldenbaum said.

Veteran Gregg Landolt’s 1944 North American SNJ-5 was the other plane from Flabob that was part of the flyover. It was a one-of-a-kind ride in the cockpit at over 100 mph, high above Riverside, just one of 19 locations along the Riverside, Los Angeles, and Orange tri-county route.

“We have a lot to celebrate in our American way of life, this great state of California whether you’re Democrat or Republican. And I just want to be thankful for that,” said Landolt.

The idea took off from a 75th anniversary flight last year over the North Atlantic, commemorating D-Day. Commander Steve Rose of the Inland Empire Wing called pilots from all over Southern California to make this year’s flight happen.

It was fitting that two of the 18 planes would come from Flabob, which has been around since the 1920s and serves as an educational airport for youth and pilots in training.

The DC-3’s Crew Chief veteran Don Newman has been as he calls it “wrenching” on planes since the 1960s, offering as much knowledge about the math and mechanics of aviation, as its place in our country’s history.

“It’s great to get out there and be part of a formation and fly around the county and show our respect to all these people. I wouldn’t miss it,” Newman said.

As the planes took flight, they honored both those who have fallen on the frontlines for freedom and those who are now standing on them for our health.

“It’s a heartfelt for those people that we’re actually going to try to do a Memorial Day fly by in this time of crisis,” said Goldenbaum.