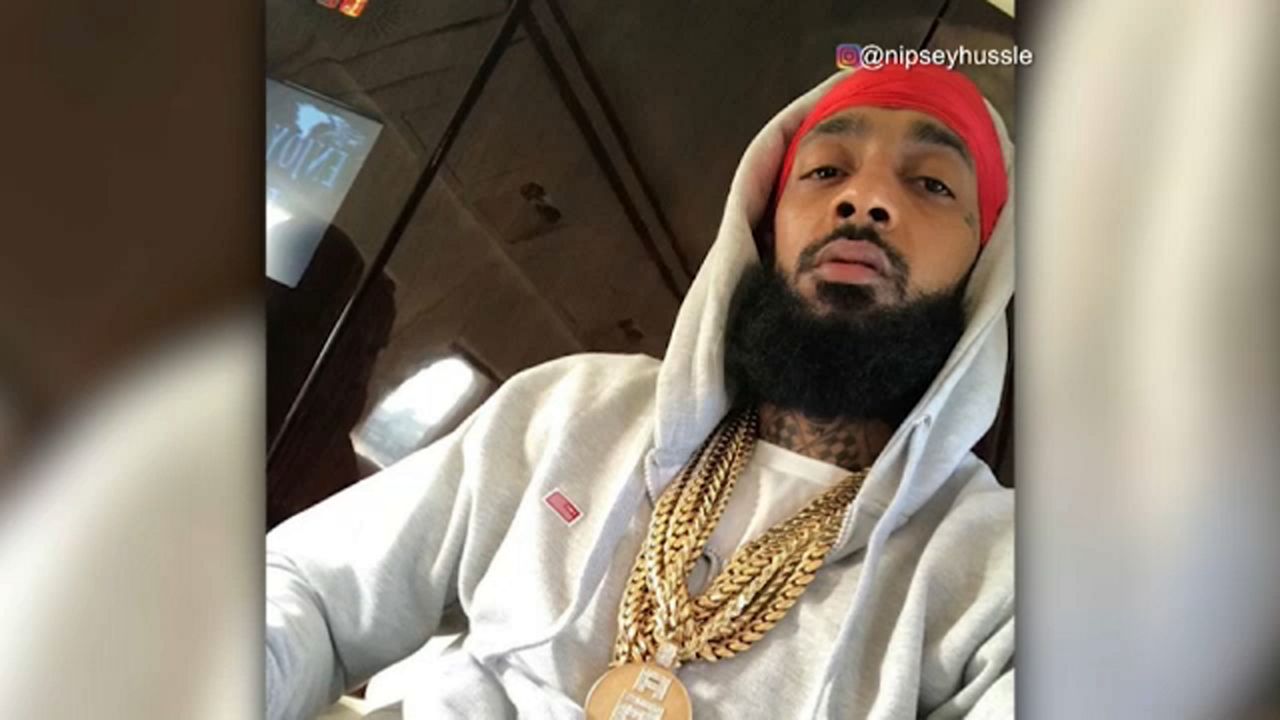 On the day he was scheduled to meet with Los Angeles Police Department brass to discuss ways of stopping gang violence, rapper Nipsey Hussle was instead being mourned today by musicians, athletes and politicians.

Hussle, 33, was gunned down in broad daylight around 3:20 p.m. Sunday in the 3400 block of West Slauson Avenue, in front of The Marathon Clothing store he founded in 2017 near Crenshaw Boulevard in South Los Angeles. Two other men were wounded in the shooting.

Hussle had been scheduled to meet Monday with LAPD Chief Michel Moore and Police Commissioner Steve Soboroff -- a meeting Hussle had requested.

"We were meeting at the request of (Hussle) with him and (Jay-Z's production company Roc Nation) ... to talk about ways he could help stop gang violence and help us help kids,'' Soboroff wrote on his Twitter page Sunday night.  "I'm so very sad.''

Soboroff also wrote: RIP sir. Many of us will join together to stop whatever caused your and so many other tragic unnecessary killings.''

Although some reports initially indicated the meeting would still be held Monday afternoon, KNX Newsradio reported the gathering was being rescheduled so Hussle's relatives can attend.

Soboroff and Moore, along with other LAPD leaders and detectives from the gang and robbery-homicide divisions are expected to hold a news conference at 8:30 a.m. Tuesday to give an update on the investigation and address "the surge in violence in the city of Los Angeles,'' according to the LAPD.

Witnesses said a young man approached to within a short distance of Hussle and the two men before firing a number of shots and fleeing to a nearby vehicle, prompting suspicion the killing was gang-related. One of the two wounded men was hospitalized in stable condition but the other refused hospital transport, sources from the Los Angeles police and fire departments told City News Service.

Surveillance video from a business across the street obtained by TMZ shows what appears to be a suspect walking up to the clothing store, where multiple people are standing outside. The shooting occurs quickly afterward, although it cannot be clearly seen on the video. But one person can be seen falling to the ground, and at least three people are seen running from the parking lot.

The Grammy-nominated Hussle, a father of two whose birth name was Ermias Asghedon, was pronounced dead at a hospital.

The suspect was described only as a young black male, LAPD's Chris Ramirez told reporters.

Moore, speaking to reporters Monday at the crime scene, said he believes the gunman and Hussle were acquainted, meaning the shooting was likely the result of a personal dispute.

"This was not a chance encounter. We don't think this was a sudden engagement,'' Moore said. "We are pursuing a number of investigative leads. We're looking at video evidence. We're looking to identify a vehicle.''

"I want to thank the community that has immediately begun reaching out to us with tips and leads. I need those to continue. More
importantly, I think the person who's responsible for this, the people involved in this, they know who they are and they're watching this right now. And I'd ask them to surrender, and turn themselves in.''

A coalition of African-American community leaders held a news conference near the crime scene Monday morning to call on the shooter to surrender to authorities. They also called for an immediate end to black-on- black violence, Project Islamic Hope CEO Najee Ali said.

Hundreds of people gathered throughout the day at the shooting scene to pay their respects to Hussle, calling him a champion of the community, playing his music and leaving candles and flowers.

Multiple memorials set up around #TheMarathonStore for slain community activist and rapper @NipseyHussle it’s clear from talking to people around the ship just how much impact he had on everyone...more to come this morning on @SpecNews1SoCal pic.twitter.com/citYgyzkdK

The Grammy-nominated Hussle was from the Crenshaw neighborhood and worked on music with members of both the Crips and Blood gangs, TMZ reported.

A variety of sources reported that about an hour before he was shot, Hussle tweeted: "Having strong enemies is a blessing.''

After news broke that Hussle died, a stream of condolences flooded the Internet.

The rapper Drake posted on Instagram, "My whole energy is just at a low right now hearing this. We just linked for the first time in years and said we were gonna do a new song this summer cause it had been too long. I'm only doing this here cause I want the world to know I saw you as a man of respect and a don. Rest easy ...''

Singer Rihanna tweeted, "This doesn't make any sense! My spirit is shaken by this! Dear God may his spirit rest in peace and may you grant divine comfort to all his loved ones! I'm so sorry this happened to you."

Singer/Musician Pharrell Williams tweeted, "You were about something positive and for your community in every chance you had to speak ... and because of that you inspired millions ... millions who will uphold your legacy  forever, Rest amongst the stars.''

Rapper Megatron told reporters at the scene, "Every time I met him (Nipsey) it was love. He was all about helping people.''

Los Angeles Mayor Eric Garcetti tweeted, '' Our hearts are with the loved ones of Nipsey Hussle and everyone touched by this awful tragedy. L.A. is hurt deeply each time a young life is lost to senseless gun violence.''

Our hearts are with the loved ones of Nipsey Hussle and everyone touched by this awful tragedy. L.A. is hurt deeply each time a young life is lost to senseless gun violence. My Crisis Response Team is assisting the families coping with shock and grief.

As homicide detectives investigated the shooting, Los Angeles Police Chief Michael Moore noted it "represents the latest loss in a troubling surge in violence. Since last Sunday 26 victims have been shot and 10 homicides.'' He promised to "work aggressively with our community to quell this senseless loss of life.''

"I urge calm and a period of reflection,'' Ridley-Thomas said. "Violent retaliation for this event will not be tolerated. Our communities have lost too many young men and bright futures to the scourge of gun violence. For healing to occur, even from this terrible incident, justice must be sought through legal means, and community peace must be found."

"I am in contact with law enforcement officials who will provide all the necessary assistance,'' Ridley-Thomas said. "And I ask members of the public to come forward with any information related to this incident or any emerging retaliatory response.''

Hundreds of fans congregated outside the clothing store, playing his songs and leaving flowers.

Hussle transformed himself from a Rollin' 60s Crip to a rap musician and channeled his success into efforts to help other stay out of gangs, according to the Los Angeles Times. He bought shoes for students, re-paved basketball courts and provided jobs and shelter for the homeless, the newspaper reported.

He helped renovate a Mid-City roller rink and redeveloped the strip mall that housed his Marathon Clothing shop where he was fatally wounded.