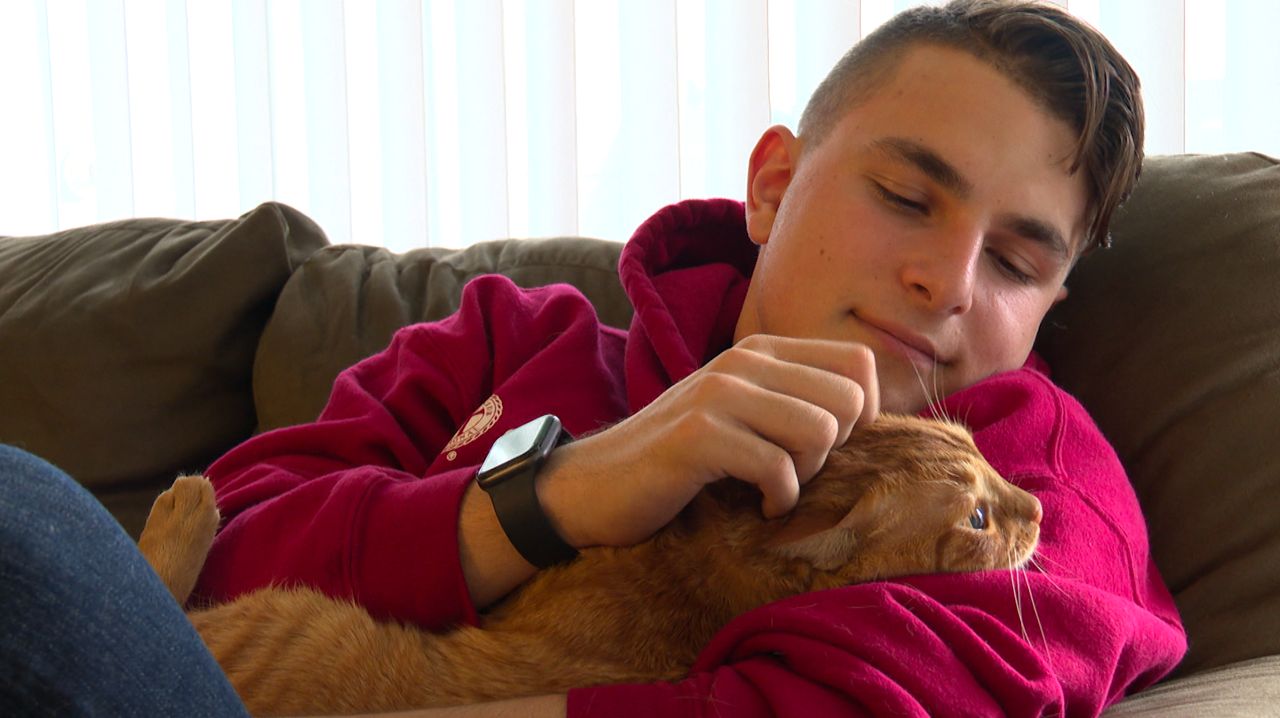 Dilan Oezkan lives in his apartment in Costa Mesa with his cat, Cinnamon. (Spectrum News)

LOS ANGELES, CA – It is a rare day for 18-year-old Dilan Oezkan to have time between going to school and working part time at a local restaurant.

Oezkan on the outside seems like any ordinary high school senior, but he has been through a lot. He and his family bounced around countless motels including the Costa Mesa Motor Inn in Orange County where the family of six crammed into single rooms. The Inn no longer exists. It has been demolished and there are plans for a developer to build apartment complexes in the lot.

“It’s all puddles and nothing. It’s so weird to look at,” said Oezkan.

The family lived at this particular in for two years.

Oezkan says he lived with his family until his mother kicked him out when he was 15. Oezkan moved in with friends until a nonprofit helped him get his own apartment in Costa Mesa. He has been able to attend the same high school for all four years. Before this, he moved from school to school.

Despite his hardships, Oezkan focused in school because he believed education would be his ticket out of homelessness. His hard work paid off. He is a high school senior and has maintained a 4.4 grade point average.

Now Oezkan has been accepted to several Cal State Universities and is waiting to hear back from other universities, including an Ivy League.

“The journey from there to then is incredible. It’s been rough, it’s been hard. I definitely wouldn’t have been able to do it without the support system that I’ve had. I just feel so excited and anxious to know that these schools have already accepted me, but those are my backup schools,” said Oezkan.

With his future looking brighter than ever, Oezkan says he can’t help, but think about his middle school teacher, Diane Estill.

“She was the first person to give me the hand and I took her whole arm. It’s been a ride since then,” said Oezkan.

Estill has been teaching at Skyview in Orange for 10 years. She has been an educator for 22 years. Estill still teaches in the same classroom where she first met Oezkan.

“He came out at about grade level in each area which was very unusual for our site,” said Estill.

The middle school teacher remembers giving Oezkan basic assessments when he re-enrolled in the school that primarily caters to homeless students.

“Most of our kids are significantly deficient academically and struggle with one or more subject so that right away told me wow he’s really got something to work with,” said Estill.

Even after Oezkan moved to a different school, the two kept in touch. Estill says she has given Oezkan rides, advice, and help wherever she can.

“That’s the remarkable thing about Dilan. That against all odds, he’s willing to put in the work, the long hours, and frustration to learn and achieve at the level that he has. The things that I’ve done is meaningful to him, but for me, they have been little,” said Estill.

Those small acts of kindness made all the difference to Oezkan. He is planning to major in political science and dreams of becoming a United States senator. He believes the only way he can truly help homeless youth beat the odds against them is by having power and a platform to make changes on their behalf.

A GoFundMe account was set up to help Oezkan afford college, room and board.

This Gofundme.com site is not managed by Spectrum News. For more information on how the site works and the rules visit  http://www.gofundme.com/safety.