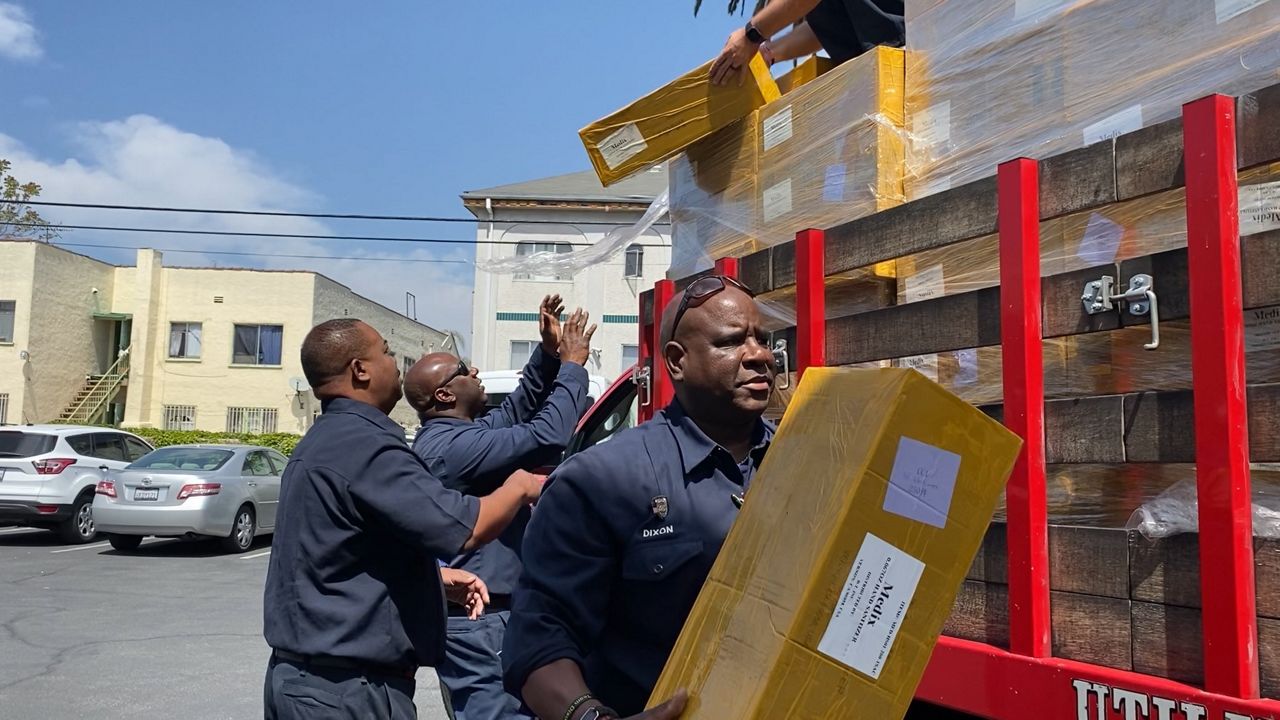 LOS ANGELES — Since the war in Ukraine first broke out on Feb. 24, donations have poured in from around the world. In LA, Ukrainian Orthodox churches have been turned into warehouses for boxes of medical supplies, clothes, non-perishable foods, sleeping bags and blankets.

Millions of Ukrainian soldiers and refugees desperately need supplies, but having them delivered to Ukraine, or a neighboring country, has been difficult.

Cargo flights are extraordinarily expensive and cargo ships can take weeks to reach their destination. To help speed up sending supplies to Ukrainians in need, LA based firefighters are stepping up. 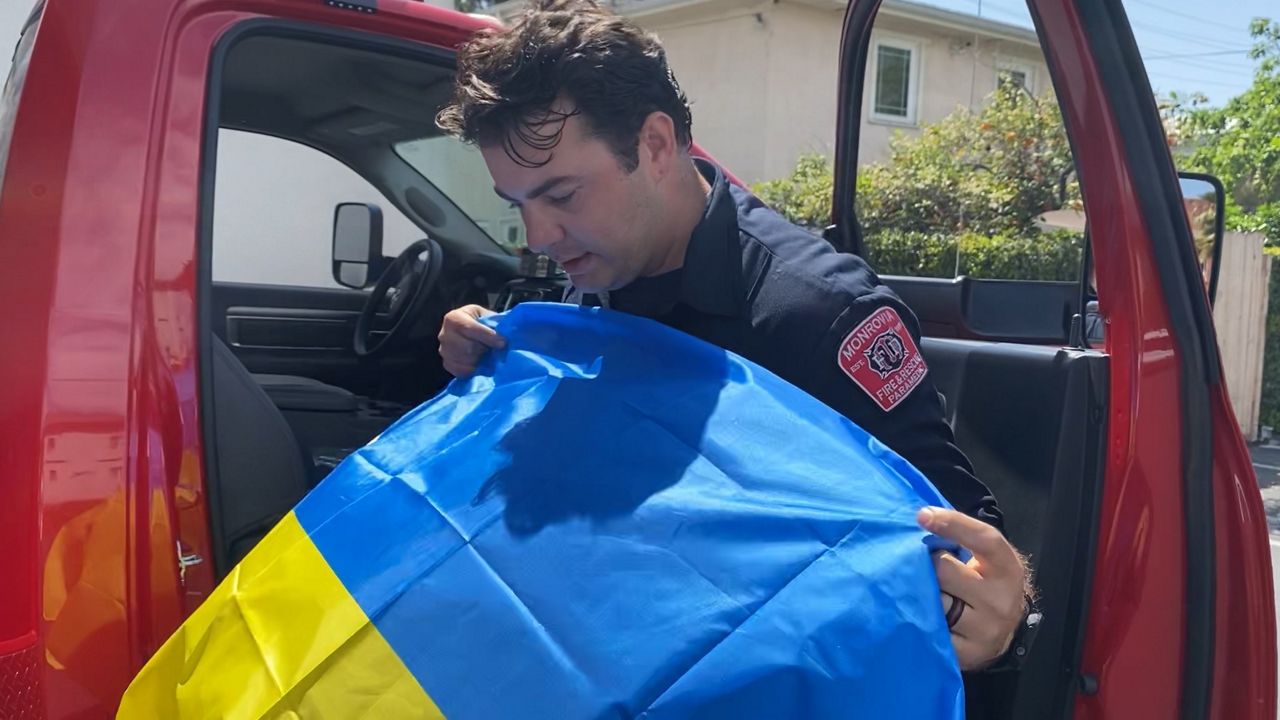 Igor Nisis, a firefighter and a paramedic in the Monrovia Fire Department, is Ukrainian American.

“My family moved here when I was thirteen years old, which was in 2000. Since all this has been happening in Ukraine, I’ve been trying to be involved in helping somehow,” he said.

Nisis is using his skills and resources as a firefighter to help get supplies over to Poland and eventually the war zone. He is part of a coordinated effort between the Long Beach, LA County and Monrovia Fire departments — the teams are working together to transport the donations.

On a recent Monday afternoon, Nisis and a team of first responders met at St. Volodymyr Ukrainian Orthodox Church in East Hollywood and loaded up five firetrucks. They would then drive as a convoy to Long Beach, where the items would be stored and eventually sent on a plane to Poland and distributed to aid groups for refugees and people still living in Ukraine.

LA County Firefighter and utility driver David Lyday said he was grateful to be part of the effort to help Ukrainians.

“It’s important for us to come together to be able to support from as far away as we can and as close as we can,” Lyday said.

Days before, the pickup volunteers had been packing and organizing the donations. Sorting everything into different categories; clothes, medicine, gauze, band-aids, baby food, hand sanitizer, etc. 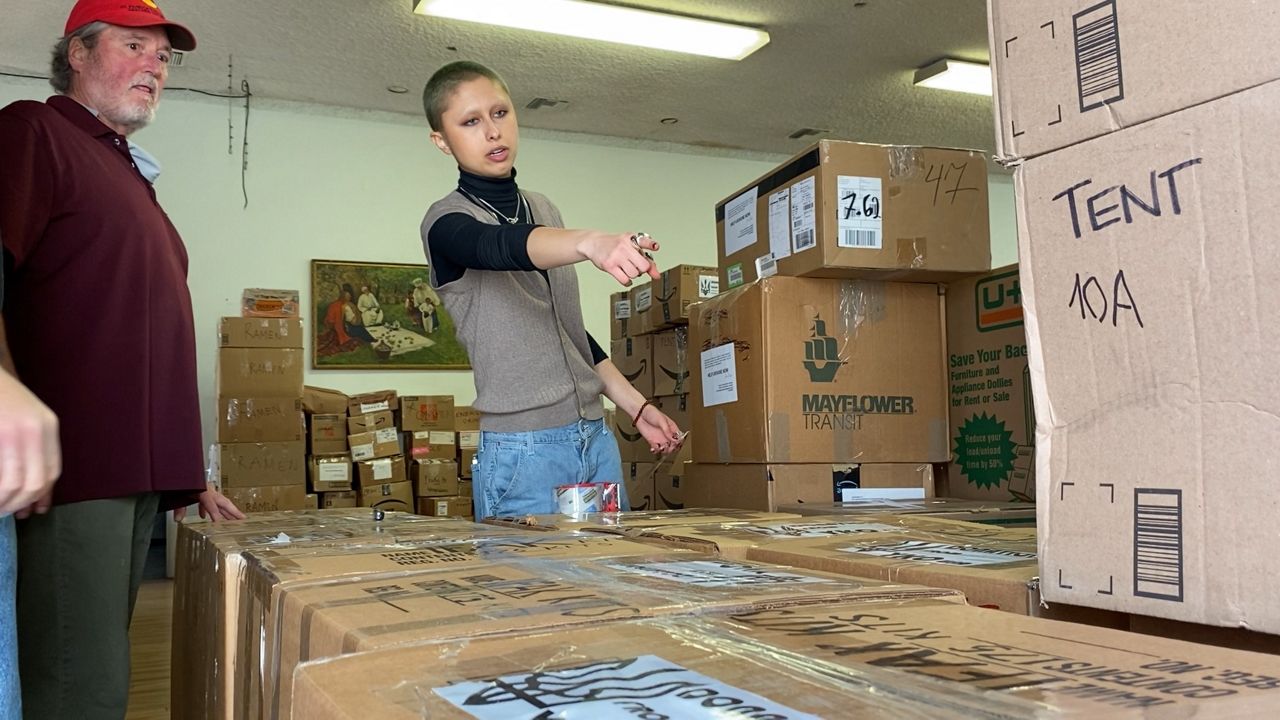 One volunteer, Daria Pyshna, left Ukraine two weeks before the war to start school in California. Her parents are still in the country.

“We don’t know anything that’s going on," she said. "Technically, all you have is the news and some communication with your family and if they don’t answer for some time, your mind just goes to the deep, dark place. What happened to them?”

Pyshna’s parents were able to escape to western Ukraine. She said she wanted to volunteer because her parents have told her that resources are low.

“Medications and armor for the soldiers, and all the equipment they need. We are trying to find medication and first aid kits. Those are really useful for them,” she said.

Nisis knows the medical supplies, and basic items are needed urgently. He and the different departments around LA County and Long Beach are working quickly. Nisis never expected his Ukrainian roots and work in the U.S. to intersect so dramatically, but now, these two families have become one.

“We always say we’re brothers and sisters in the fire department," he said. "It makes me very, very happy to see my brothers helping my homeland right now."