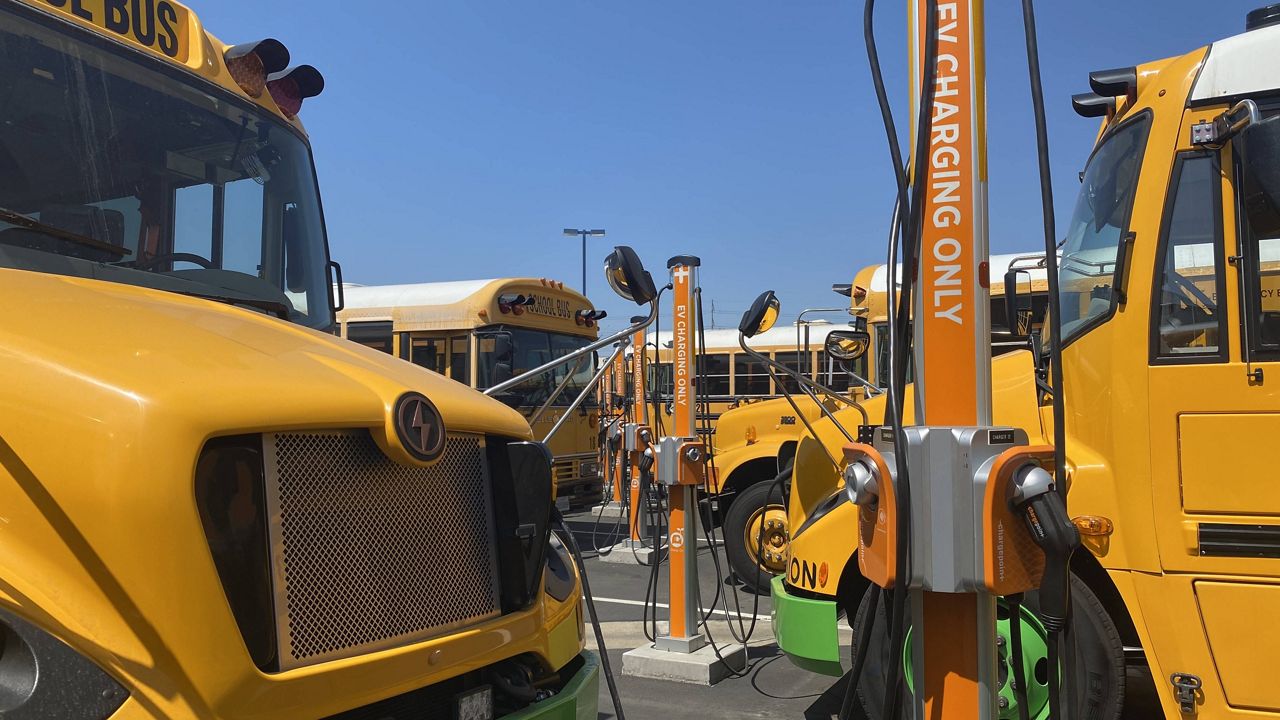 ANAHEIM, Calif. — Out with the old and in with the new.

John Paul Jones, who goes by J.P. Jones, has been training bus drivers on how to operate clean energy electric school buses — something he never thought would happen.


“I’d say there was no way we’d have electric buses. That is what I would be thinking if it was 2003. It hadn’t been heard of at that time,” said Jones.

Four clean energy electric buses including this one just made its way to Anaheim Elementary School District’s fleet of 90 buses thanks to a California Energy Commission grant that pushes the state climate goals and supports the district’s green initiatives.

The district is expecting another four buses by fall.

Jones said for every diesel-fueled bus replaced by a clean energy electric-powered bus, an estimated 23 tons of greenhouse gas emissions will be eliminated each year.

“There will be no pollutants going out into the atmosphere near our students. I think that’s what the main difference is going to be for the environment and plus for the students that we transport,” said Jones.

“This grant is a game changer,” said Anaheim Elementary School District Board President Mark A. Lopez. “We’re proud to be one of the school districts to have been chosen to receive this honor. It validates and supports our ongoing efforts to promote green practices in our schools for a better environment.”

Currently, 45 of the district’s 90 school buses are powered by diesel. The district hopes to continue to work with the state and the CEC in swapping out its diesel-powered buses with clean electric ones.

“School buses are by far the safest way for kids to get to school. But diesel-powered buses are not safe for kids’ developing lungs, which are particularly vulnerable to harmful air pollution,” said CEC Commissioner Patty Monahan. “Making the transition to electric school buses that don’t emit pollution provides children and their communities with cleaner air and numerous public health benefits. The Energy Commission is proud to support this transition to protect the health of children throughout the state, something that will help all Californians breathe easier.”

The electric bus program is just one of the areas AESD is working on in its green initiatives program. It recently collaborated with the city of Anaheim and its Solar for Schools Program to install solar panels at two of its schools: Betsy Ross Elementary and Benjamin Franklin Elementary.

AESD hopes to continue to expand the solar panel program to other campuses in the future to save energy and to lower electric bills, while taking proactive steps to become a leader in green initiatives.

“We know for certain climate change is real. Just look around at the wildfires, the water shortages and the extreme weather events,” said Professor Fred Smoller, who is an associate political science professor at Chapman University.

The educator was rewarded a $5 million state grant to the Orange County Sustainability Decathlon in 2023.

It is a chance for innovators to design and build a greener future. However, Professor Smoller said going green should be a concept taught to kids now and electric buses is a way to do it.

“One, you’re dealing with younger people. Second, they are not hauling huge amounts of weight and third, they go back to a common place at night to be recharged. It’s a great idea,” said Professor Smoller.

California established goals of only selling cars that run on electricity by 2035 and relying entirely on zero-emission energy sources for its electricity by the year 2045.

It needs districts like Jones’ to get to those goals.

“Our students are continuing to grow and learn new things so it’s better off we get them moving forward now with what’s going to be going on ahead which is electrical vehicles,” said Jones.

Jones said his passion for being the reliable and friendly face to students has not changed over the years, but what is different is his passion to help create a safer world with a cleaner air for his students.