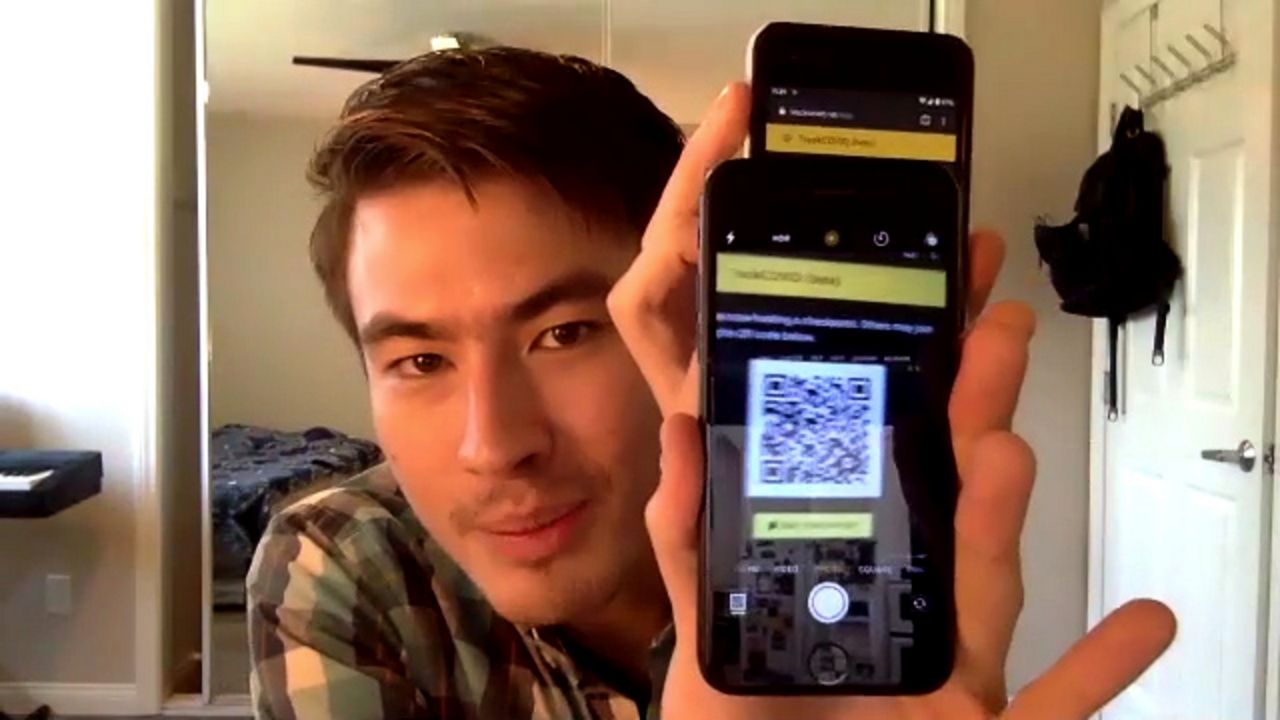 IRVINE, Calif. — California Gov. Gavin Newsom has said one of the parameters of getting back to some sort of normal is having a system that can help track where people who’ve been infected with COVID-19 have been.

One tool is in the works in SoCal that is using the power of technology to help with contact tracing, while protecting privacy.

A software engineer at UC Irvine has helped develop the foundation for something that could eventually help with that contact tracing. And all it takes is using the camera to scan a QR code. And it will take you to site called “TrackCOVID.”

It took a whole lot of coding to create it. Tyler Yasaka started the process using a skill he already has: software engineering. And he has developed a cell phone based app that might one day help him in his next career.

“I want to become a medical doctor,” he said.

He said he loves what he’s been doing for a few years now, “but to me it was missing that kind of human connection.”

Yasaka says he wanted to provide a technology tool that could help people and their doctors with contact tracing – figuring out who’s been in contact with someone who’s tested positive for a disease. In this case, his app would help contact tracing with COVID-19.

“Usually that’s a manual process that requires calling people and interviewing people. And it can be error prone because people are relying on their memory,” he said.

Yasaka says TrackCOVID could help cut down on those memory lapses and supplement traditional contact tracing.  But it helps protect user privacy.

“I think of it more like keeping a journal of where you have been,” he said.

Except Yasaka says instead of actual locations, TrackCOVID keeps track of those places using a series of codes (QR codes). He says users would only have to grant the app access to their cell phone camera to take a picture of the code. Then the app saves an entry in your pseudo-virtual journal.

He says it was developed with user privacy as one of his most important priorities. Yasaka explains TrackCOVID, “doesn’t ask you for your name or your phone number. Doesn’t ask you for access to your location or you Bluetooth.”

If someone does test positive and chooses to alert others via the app, if you’ve crossed paths with that person by scanning the same QR Code, you’d receive an alert.

But there are a few hurdles to for this app to work. Yasaka says it would take people’s participation. And it would take unique QR Codes to be posted everywhere, such as businesses, parks, and more. But if that does happen, Yasaka says he hopes his app can help offer, “peace of mind. And then perhaps saving lives.”

Then Yasaka says, with the help of his app, and the other parameters set by health officials and politicians, maybe we can all return to some sort of normal — in a safer way.