A rider rides a Pedego electric bicycle up a hill. (Courtesy Pedego)

FOUNTAIN VALLEY, Calif. — At the onset of the coronavirus pandemic, Don DiCostanzo didn't know what to make of it.

It was the middle of March 2020. DiCostanzo, the founder and CEO of electric bike manufacturer and seller Pedego, remembers it well.

Government shutdown orders forced him to close his Fountain Valley factory. He had to furlough most of his employees, and there was a lot of uncertainty around the future of his business.

But the following month, the e-bike business boomed.

That demand continues to this day. The pandemic fueled the growth of the electric bike business. In the past 12 months — throughout the coronavirus pandemic — Pedego reported $121 million in retail sales.

"We were already growing 20% to 30% every year," said DiCostanzo, who founded the company in 2008. "The coronavirus acted as an accelerant to make people aware of other outdoor recreational things that they can do."

Pedego's sales highlight the maturation of one of the fastest-growing segments in the cycling industry. An e-bike is a bicycle with an electric motor that can help propel the bike forward.

According to the Light Electric Vehicle Association, the U.S. e-bike market is quickly catching up to the mature markets in Asia and Europe. By the end of 2021, the association estimates more than 1 million riders will have an e-bike in the U.S.

"In a short few years, the market in the USA will reach more than 3 million," a Light Electric Vehicle Association official wrote in a recent blog post.

Worldwide, the e-bike industry expects to grow into a $48 billion industry, thanks to its ease of use as an alternative form of transportation, marketability to seniors and environmental friendliness. 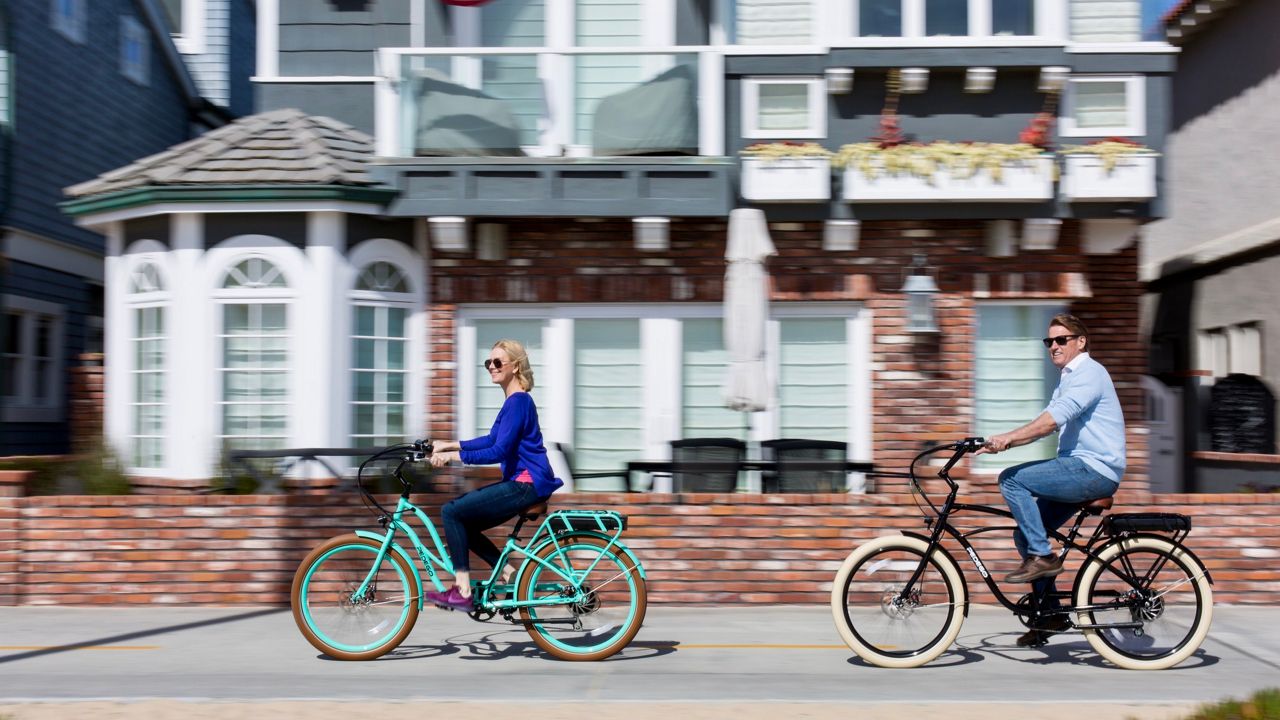 Pedego has been at the forefront of the e-bike craze.

The 64-year-old DiCostanzo founded the company more than a dozen years ago after struggling with riding a regular bicycle.

"That's how I got involved," he said, adding how he was finally able to make it up a hill assisted by the e-bike. "I said, 'there's something to this.'"

He focused marketing on the growing baby boomer population.

Riding a bike, DiCostanzo said, is one of the first things people give up when they begin to grow older.

"They stop riding bikes because they didn't have the same energy level or stamina or physical agility when they were younger," said DiCostanzo.

Since then, his company has grown. Pedego has more than 200 stores worldwide. They opened their newest retail storefront in Santa Monica this past week.

When DiCostanzo began selling e-bikes, he found his customers were using them 90% for recreation and 10% professionally.

Now, that has changed to 75% recreational to 25% professional, he said.

As the pandemic continues, he believes the demand for e-bikes will continue to grow. His biggest challenge right now is the supply chain from his factories in Asia.

The pandemic has created a significant shortage of shipping containers and backed up Pedego orders for about four weeks, DiCostanzo said.

Still, it's a good problem to have.

If demand continues for Pedego e-bike, which DiCostanzo thinks it will, he plans to open up to 1,000 Pedego stores in the next several years.

"Demand is at an all-time high, and even though the lockdown was lifted, it hasn't waned," he said.