There could be a time soon when you'll look up at the sky and see chickens flying through drone delivery.

El Pollo Loco last month announced it is piloting a program in which a remote-controlled drone will carry a customer's chicken order, cruise hundreds of feet in the air and drop off the packaged food using a wire into the customer's backyard.

El Pollo Loco is teaming up with drone manufacturer and operator Flytrex to perform these "Air Loco" drone deliveries.

"We wanted to lead the way in the industry and be the first to deliver a memorable experience to our customers in a cost-efficient, fun and reliable fashion in a way no restaurant brand had previously attempted," said Andy Rebhun, vice president of digital at El Pollo Loco, in an email to Spectrum News.

But before customers get too excited about the possibility of seeing their El Pollo Loco chicken orders fly above their home and dropped off in their backyard, legal challenges, such as nuisance and private property air rights, could arise.

"I think drone delivery in a crowded metropolitan sprawl like Los Angeles is a great idea. But there's a lot of kinks to work out," said Justin Thompson, a partner and the Los Angeles office managing partner at Nixon Peabody. Thompson specializes in real estate and property rights.

"I think everybody seems to overlook when they talk about drone flights, drone deliveries and flying autonomous vehicles is that the homeowner owns the air space above their property," Thompson said. "There's a lot of debate about how high up a homeowner's private property rights and their air space go, but there's no denying the fact that they own the air space above their property up to a certain point." 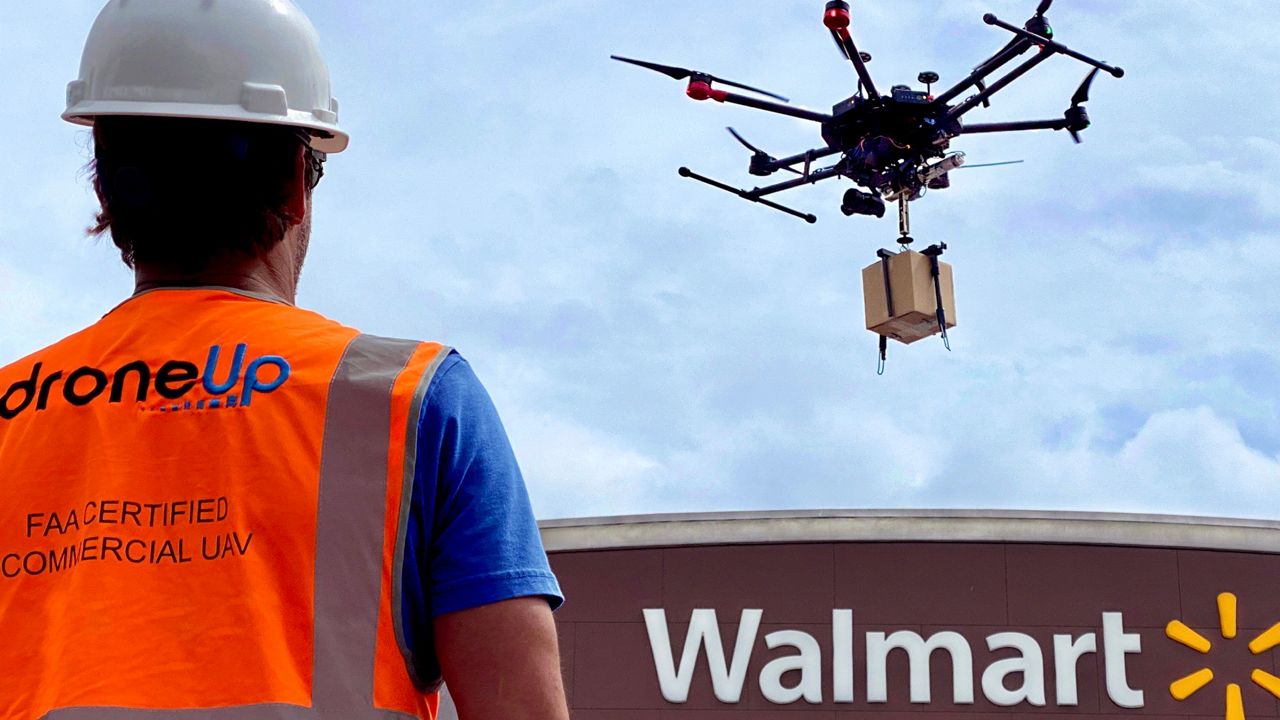 Drone delivery is the evolution of standard shipping and the next frontier for businesses looking to meet consumers' insatiable demand for instant delivery.

The coronavirus pandemic and stay-at-home government orders, social distancing and other restrictions accelerated the e-commerce movement and, subsequently, the demand for delivery.

According to Shopify, nearly seven out of 10 people in the U.S. they surveyed expect same-, next- or two-day delivery. Today's consumers want fast and free shipping.

"No one saw this coming," said Matt Mugar, the co-founder of Boa Logistics, a third-party logistics company, about the high demand for delivery. "E-commerce and delivery exploded during the pandemic. We started to see this boom after the first two quarters of 2020. Several companies were trying to bring in supplies like toilet paper, utensils and personal protective equipment. Once the stimulus checks started arriving, people were buying all of this stuff online, and there was an influx of e-commerce shopping."

Traditionally, most goods are shipped from China, Vietnam or other parts of the world to U.S. ports. Truckers will then transport those goods to warehouses or cold storage facilities, where last-mile delivery drivers pick up the goods and deliver them to a consumer's home.

But due to the pandemic, the combination of high demand and shortage of drivers shot up the delivery cost, Mugar said.

The cost of delivery during the pandemic increased two to three times year-over-year, he said. Drone delivery could be a cheaper and faster alternative, especially for last-mile deliveries.

“Autonomous drones offer lower cost per mile and higher speed than vans in last-mile deliveries,” said Pedro Pacheco, a senior director analyst at research firm, Gartner. “When they deliver parcels, their operational costs are at least 70% lower than a van delivery service.”

"Walmart already has a significant part of the infrastructure in place — 4,700 stores stocked with more than 100,000 of the most-purchased items — within 10 miles of 90% of the U.S. population," Furner said in a news release. "This makes us uniquely positioned to execute drone deliveries, which is why our investment in DroneUp won’t just apply to the skies but also the ground."

An FAA spokesperson told Spectrum News the drone and cargo must weigh less than 55 pounds.

The drone operator must be licensed, see the drone at all times, cannot fly it across state lines and can only fly a maximum of 400 feet above the ground unless granted a waiver or exemption.

The FAA says drones can fly in the airspace over private property, residential neighborhoods and public streets.

Companies performing drone deliveries need to have a pilot with a certificate, and each drone must be registered with the FAA. It costs $5 for a certification that lasts three years.

"However, they are flying in very tightly controlled environments, and the FAA continues to assess the performance, safety and security of these missions," the spokesperson said. 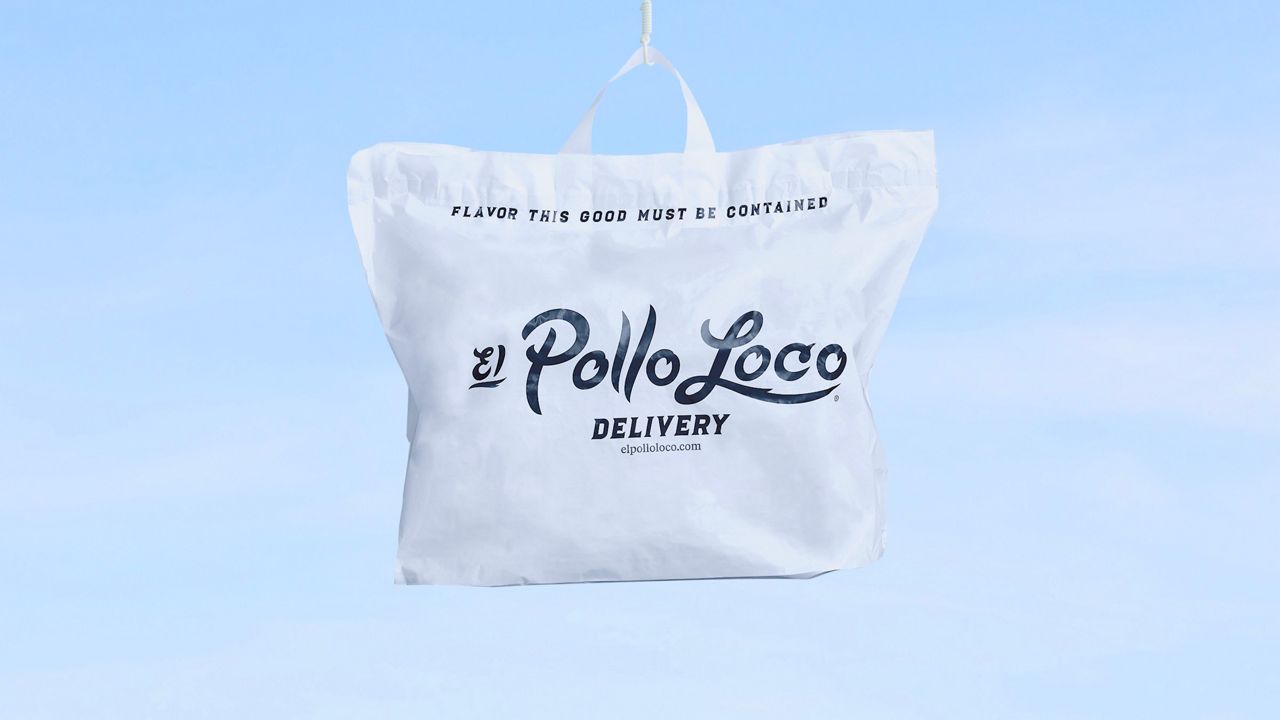 The drone itself is nearly 50 inches in diameter, weighs about 26 pounds without the payload and can carry 6.6 pounds. The drone is battery-operated and can fly for almost an hour before needing to be recharged.

The way it works is once the restaurant receives the order, a staff member will place the food inside a special insulated packaging container attached to the bottom of the drone. The drone will then lift off from the El Pollo Loco restaurant, with the payload, climb up 200 feet and trek up to 32 miles per hour — without traffic — to a customer's home.

"At this time, we expect the drone to be able to deliver within two miles of the restaurant location," said Rebhun. "Depending on individual store volume, each restaurant can expect to have either one or two drones."

Rebhun said the drone delivery would allow the company to save as much as 30% off in delivery costs while giving customers their food quicker than the traditional car delivery option.

The goal, he said, is to roll out Air Loco in 10 Southern California restaurants later this year, then scale the delivery option into new locations "based on test results, market demand and FAA regulations."

Rebhun added that each location where they'll operate would have different flight patterns. The buzzing noise of the drone won't be as much of an issue since the noisiest part is when the drone takes off, he said.

"After that, it is extremely quiet as it travels at 200 feet of altitude," he said.

Regarding misdelivery or accidents, he said, "the drones are automated, and all FAA rules regarding line of site apply, so if a problem occurs, we'll be able to see it and course-correct immediately."

El Pollo Loco, he said, is also aware of possible legal implications of the drone delivery method and working hand in hand with their partner Flytrek to make sure they comply with the FAA.

"We're excited to see how our customers react and use Air Loco during our test," he said. "With that, we wanted to lead the way in the industry and be the first to deliver a memorable experience to our customers in a cost-efficient, fun and reliable fashion in a way no restaurant brand had previously attempted."

One law prohibits a drone operator from flying a drone to enter someone's airspace to record or take a picture of someone "engaging in a private, personal or familial activity without permission."

But for the most part, drones and air rights still operate in a gray area in many places.

"If there is no permission to travel through that airspace, that would technically be a trespass," Thompson said. "It is exceptionally unlikely that drones would be able to effectively make deliveries to private parties without encroaching or trespassing on the airspace of other private property."

Thompson cites a 1946 U.S. Supreme Court case, United States v. Causby. A chicken farmer in North Carolina lived next to an airport, which the U.S. leased.

The farmer sued the U.S. for ruining his chicken farm and other damages. The farm was in the direct path of the runway. The frequent number of military planes that flew — as low as 83 feet — over the farm, the bright lights and the noise from those planes killed the chickens on the farm "and caused loss of sleep, nervousness and fright on the part of respondents."

The court found "that the government had taken an easement over respondents' property, and that the value of the property destroyed and the easement taken was $2,000," a summary of the court records shows.

Thompson said the court found that the loud noise and number of planes flying in and out of the airport affected the farmer's use and enjoyment of his private property.

With delivery drones, one has to think about the loud sound of the drone and the physical invasion of their air space, Thompson said.

"Imagine living in a downtown high-rise, and you are constantly hearing the buzzing of drones dropping off food or other stuff on your neighbor's balconies," he said.

If drone delivery becomes more popular, Thompson said, it's only a matter of time before someone files a lawsuit based on nuisance or trespassing. But it'll be hard to quantify the damages.

However, people should expect this type of delivery method to be here to stay.

"The tech sector is so far ahead of the government regulations," he said. "I expect there to be lawsuits and then steps taken to restrict it. It'll exist, shut down, legal battles will be fought, and then it'll happen. This whole area of autonomous vehicles and autonomous deliveries is so far outpacing the regulatory structure in place that it's going to be a game of catch up."

Drone delivery is the future

It makes no sense sometimes to hire a driver to drive for a half-mile or a mile to deliver a small package, Mugar said.

"With drones, it could help solve several issues," Mugar said. "One, a company can easily deliver a small item quicker, and two, the company doesn't have to pay a driver and insurance. It could also help get off our dependency on foreign fuel."

While Mugar likes the idea of drone deliveries, he is also cautious.

"There are a lot of liabilities," he said. "There could be breakage, damage, loss or theft during the act of delivery. You have the air space issue. And no one knows how people are going to react to a buzzing drone."

He believes people will embrace drone delivery at first, but like other tech products such as Uber, Airbnb and others, there will be backlash. For example, several cities have restricted Airbnbs and short-term rentals in their community because of its impact on their neighborhoods and hotel tax base.

"Eventually, I think what's going to happen is that residents are going to get fed up and get tired of it," he said. "There's probably going to be neighborhood no-fly zones."

But, he said, there is no stopping the future of delivery.