During his college years at California State University, Fullerton, he drove the 20 or so miles to Newport Beach to visit the coastal amusement park and the surrounding area. He'd walk along the boardwalk, eat a frozen banana, and watch people ride the Ferris wheel.

"Of all the places in Orange County, this place is the embodiment, the essence of the Orange County experience," said Sherwin, president and CEO of Visit Newport Beach. "You're strolling along the boardwalk, enjoying the weather on a summer night, grabbing a dessert, and hopping on the Ferris wheel or one of the other rides. This is our own mini Coney Island. There is a Southern California feel to it. People from all around the world come here."

The Balboa Fun Zone has been a staple in Newport Beach for more than 100 years, but its most recent listing on the commercial real estate market has some people concerned about the waterfront property's future.

The Discovery Cube, the nonprofit owner that also oversees the Discovery Cube kid's museum in Santa Ana, has put up the Balboa Fun Zone for sale as the organization tries to weather the financial impacts of the coronavirus pandemic. The nonprofit announced the sale in December, but the local landmark property didn't hit the open market until February. The listing broker said they've been contacted by several interested parties for the property.

"The market is responding really well," said Joseph Lising, a managing director at Cushman & Wakefield and one of the listing brokers. 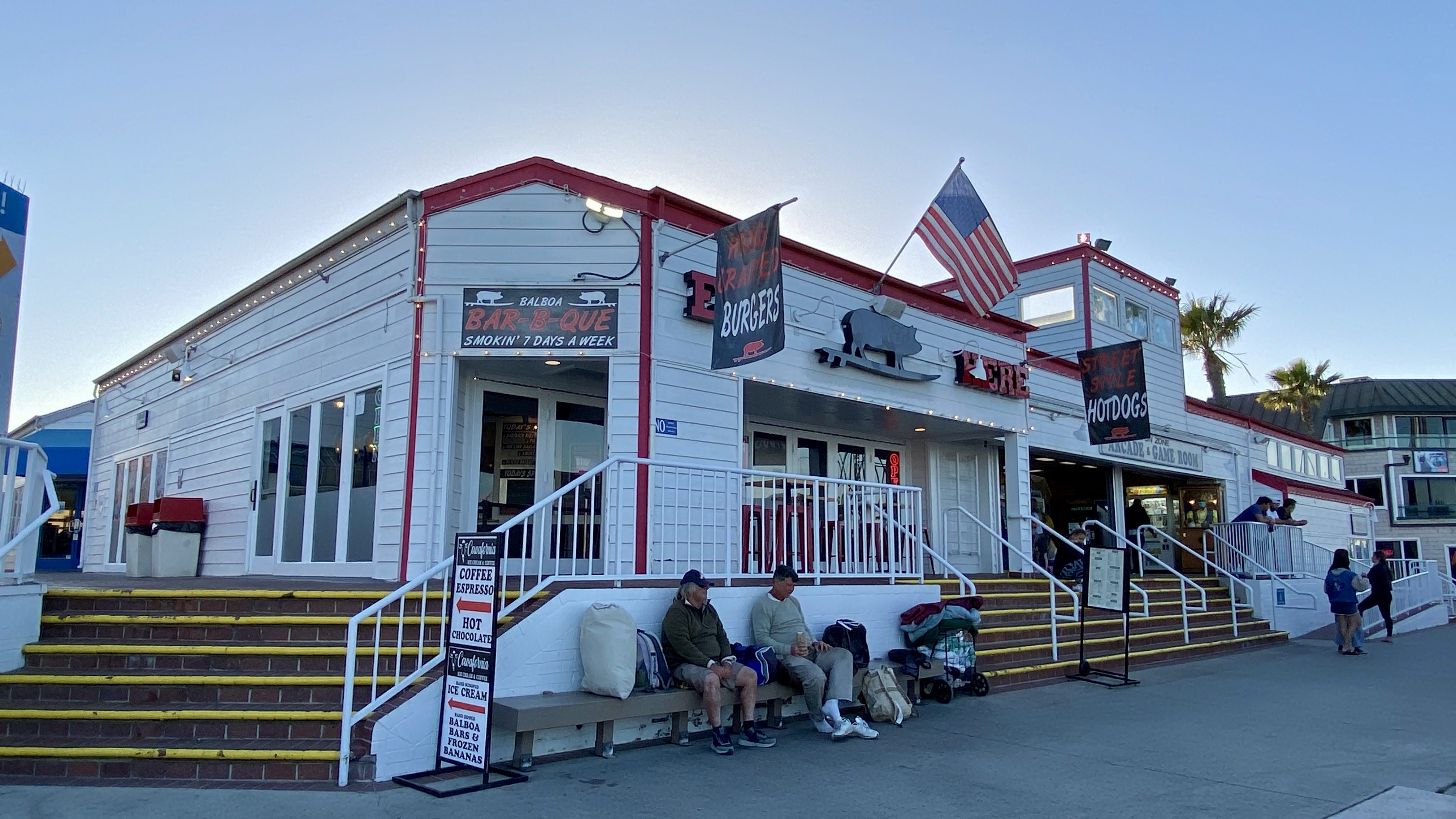 Referred to as the Coney Island of Newport Beach, the coastal amusement area was built in the early 1900s and sat along the Balboa Peninsula and across the Balboa Pier.

It features a Ferris wheel dubbed as "the world's longest Ferris wheel ride," quarter arcade games with a Zoltar, a nautical museum, and a waterfront location.

Before the pandemic hit, the Fun Zone was a popular family-friendly destination for the millions of people who visit the city every year, according to Visit Newport Beach, the city's tourism arm.

The site was a popular field trip destination with schools across Orange County.

The pandemic, though, has hit this place hard.

On a recent visit, one can feel the heat from the sun's rays hit the skin. A cool breeze blows off the bay and carries the lingering smell of the water.

The area, though, was mostly empty. Workers at the quick-serve restaurants appeared bored. With no customers, they stood behind counters, waiting for anyone to serve.

The museum was closed. The Ferris wheel spun with no one aboard. The Happy Swing ride was fenced off. A little more than half a dozen or so people were playing in the arcade.

Mostly, some people could be seen wearing masks, strolling along the boardwalk, enjoying the views of the marina, seeing the boats on the slips, and the multi-million-dollar homes that line the peninsula.

"This is the heart of the peninsula," Sherwin said.

"We see this as an opportunity to bring what we do best at Discovery Cube, creating exhibits and science-based educational programs, and infuse that with the programming at ExplorOcean to create a lasting legacy that everyone in the community will be proud of," said the CEO of Discovery Cube Joe Adams at the time of the merger.

Sherwin said the nonprofit had some grand plans for the area, but those plans fell through when the pandemic hit.

"They wanted to bring in an education component and fundraise and bring that dream to reality," Sherwin said. "All of the plans and rendering, it was thrilling to see what they were bringing. But the sad reality is, it is yet another victim of COVID. They had some momentum. They were formalizing the plan, and then COVID hit, and their revenue source dried up."

Adams said indeed, they had big plans for the site.

According to reports, there were plans to transform the place into a seaside educational facility including a science museum, aquarium, ocean lab, and boat pavilion.

"We wanted to bring a science museum on the ocean to the site, but it was going to require a big capital raising campaign. We were looking to raise $25 million," Adams said to Spectrum News. "Right when we rolled out the campaign, COVID came. Nobody is going to contribute to a capital [raising] campaign during COVID."

In mid-March, right around the time of the governor's stay-at-home order, Adams said he had to close the Fun Zone and the ExplorOcean Museum.

To this day, the museum remains closed while the arcade, Ferris wheel, and quick serves are open and operating at limited capacity.

"We were dreaming of a great facility," Adams said. "We were excited. I think the community was excited for us. We were gung-ho on our part. When COVID hit, it took the wind out of our sails."

Now, the nonprofit owner is looking for the best and highest offer, said Lising, the commercial broker at Cushman & Wakefield.

It is unclear how much the property could sell for and if a new owner will keep it as a seaside amusement and retail area.

The sale includes the 16,000 square foot Fun Zone building, which is 33.5% occupied, a 21,400 square foot Marina, a boardwalk that includes the Ferris wheel and other rides, and a 58-stall underground parking garage. No sale price was listed.

"The current below-market performance of the property relative to the surrounding strength of the location presents a textbook upside opportunity for the investment and development community," the listing read.

The listing describes the property as a mixed-use retail and entertainment center and a "once in a generation opportunity."

"At this point, they gave it their fair share and are looking to sell it possibly to a for-profit developer to beautify that area," Lising said.

According to city staff, the Balboa Fun Zone is zoned for visitor-serving commercial and identified as an "important cultural amenity" in the Balboa Village.

The property is designated for visitor-serving retail, marine excursion services, cultural institutions, and personal retail services such as barbershops or salons. A new owner could also build a motel, hotel, or something similar, along with a restaurant, as long as the owner receives a city permit, said Benjamin Zdeba, a senior planner in Newport Beach, in an email to Spectrum News.

City Councilwoman Diane Dixon said she hopes the new owner can continue investing in the Fun Zone and build upon the existing area.

"The community loves the Balboa Fun Zone and has for generations," Dixon said. "It's a special place in our community for our residents and business owners."

Lising, the commercial broker, said he was receiving interest even before officially listing the property on Feb. 16. At least eight groups have contacted his team to learn more about the property. He and his team will begin touring people this week and calls for an offer within the next couple of weeks.

Lising expects the sale to be completed in the next few months.

"This is going to attract a lot of attention," he said. "This is iconic. It's recognizable, and the new owner could do a lot of things with this property."

Sherwin understands that any new investor will need to assess the Fun Zone's economic viability and make a return on investment.

Some have pointed out that the Fun Zone requires modernization, Sherwin said.

"Someone is going to invest a significant amount of money for that property," he said. "It's prime real estate. It has great prestige, and I understand the [new owner] needs to figure out a revenue stream to get a return on their investment. My concern is the essential character that makes up the Fun Zone what it is, I hope would be left intact."

Sherwin said the property doesn't have to remain the same. He wants the new owner to be mindful of the Fun Zone's history and its unique place in Newport Beach.

"I just think it would be criminal to see the Fun Zone wiped out and see a whole slew of condos built there, and all the history and character [of the Fun Zone] gets swept under the rug," he said. "I think that would be the least desirable of all of the outcomes."

Svalstad, 84, has lived in Newport Beach for more than 45 years. He remembers the bumper cars, merry-go-round, and other rides that no longer exist at the Fun Zone.

He likes that the Fun Zone is an educational center for children and adults. On some days, school children on field trips would fill the place.

He said not many community members had discussed the Fun Zone sale because not many are aware that it's actually for sale. Svalstad knew about the sale since he is in touch with Discovery Cube officials.

He said it would be unfortunate if an apartment or hotel were built on the site. This place has a lot of history in Newport Beach. A lot of kids and grown-ups have fond memories visiting the area and learning something educational, he said.

"I hope it can remain as some fun and educational activity place," Svalstad said. "This is one of the few places on the water that you can take guests to with children. If they can keep it something similar and what it used to be on an upgraded basis, that would be nice."