Too much high pressure can be bad for California

We typically perceive high pressure as a good thing for fair weather lovers. Usually, it is associated with warm temperatures, plenty of sunshine and calm winds.

There is a semi permanent ridge of high pressure that ebbs and flows in the eastern Pacific. This weather feature is so common that it’s named the Eastern Pacific High.

Often, this ridge shifts east and leads to above normal temperatures and abundant sunshine in California. When this ridge breaks down or shifts west toward the central Pacific, the door opens for Pacific storms to move over California.

This happens periodically from late fall through early spring.

These storms replenish the snowpack in the Sierra Nevada Mountains. Rain from these storms also replenishes the groundwater, lakes and reservoirs. These storms also add moisture to parched trees, bushes, grasses and other fuels wildfires feed on during late summer and early fall during California’s fire season.

Back in 2013, the semi-permanent Eastern Pacific High became more of a permanent fixture over the northeast Pacific. It lasted until the end of 2016.

This ridge of high pressure helped create “The Blob.” The blob was an unusually warm pool of water in the northeast Pacific. This killed sea life that couldn’t handle the rise in ocean temperatures. The warm ocean water also led to a toxic algae that killed off more sea life.

This time period coincides with one of California’s longer droughts. That ridge blocked storms from sweeping across California, preventing rivers, lakes, groundwater and snowpack from getting replenished.

Because of the relatively low pressure off the California coast, it generates wind. These are Santa Ana winds (Diablo winds in Northern California). 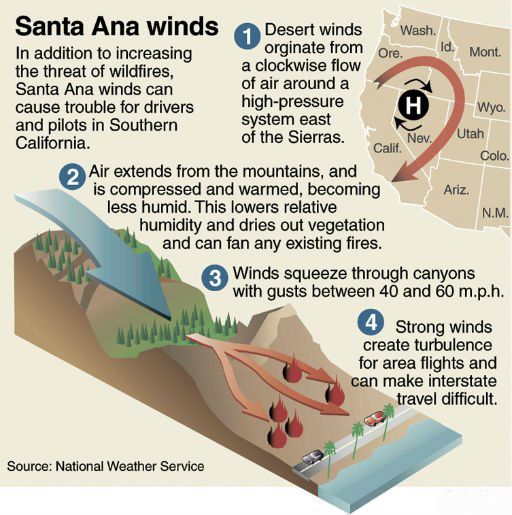 One or two short-duration, weak Santa Ana events can be nice in fall and winter because they bring warm temperatures to the coast. However, several back-to-back Santa Ana events (without storms) can bring devastation to California sparking wildfires.

When an upper level ridge of high pressure lasts for several years, you get drought. Several years of drought combined with Santa Ana winds spell disaster for SoCal and a year-round fire season.