At Knott's Scary Farm, the food is just as scary as the mazes

BUENA PARK, Calif. — The fried frog legs were bent like a splayed bowlegged diver propped up in the middle of a shallow plate of brown sausage and rice.

The black shredded seaweed on top of the crab sushi roll appeared like spider legs on a porch step.

One drink had a plastic syringe half-filled with thick red liquid that looked like blood inside strawberry lemonade.

While the mazes and scare attractions get most of the gory glory at Knott's Scary Farm, the themed food prepared for the more than a month-long event is just as frightful. 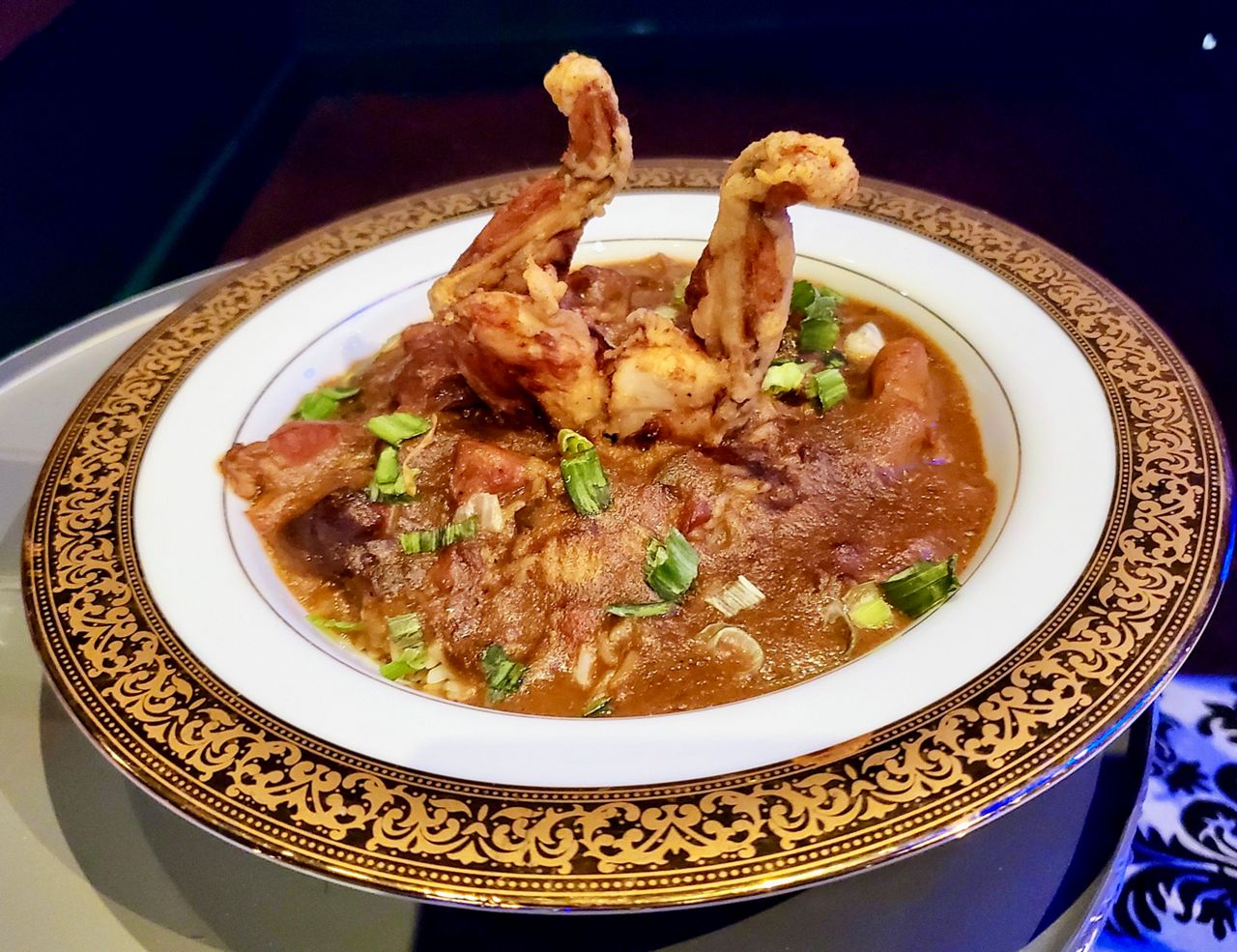 Knott's Berry Farm's transformation into Knott's Scary Farm and the kiddie version of Knott's Spooky Farm, which runs from Sept. 22 to Halloween night, Oct. 31, brings out the costumed ghosts and ghouls, and shrieks and screams, in all forms at the annual Halloween haunted event.

Many of the tens of thousands of visitors are there for the haunted mazes and scare attractions to get the adrenaline pumping. But science shows that emotional distress can create hunger, and visitors will get their appetites filled this year.

During this Halloween season, the Knott's Berry Farm food and beverage team goes over the top to create a cornucopia menu with crazy concoctions and scary names to enhance the haunt experience.

"We have to compete against the [haunted] mazes," said Wilf Seymour, the food and beverage director at Knott's, to Spectrum News. "When you look at those mazes, it's amazing. So we need to put something out that's just as fun."

This year, some of the items on the menu include creepy calamari — calamari rings on a stick — a fearsome foot-long hot dog, frighten Philly cheese tater tots, ghouls mac and cheese with steak bites and zombie brain mint brownie stuffed inside a red churro.

For drinks, the team dresses up some regular glasses with props. The "I Vant Your Blood" drink has a plastic syringe filled with a strawberry puree inside a vodka-infused strawberry lemonade. The person has to squeeze down the needle to release the puree into the drink and mix it.

The Redrum drink combined whisky, grenadine and pineapple juice with chamoy on the rim of the glass and topped with a small pineapple slice. 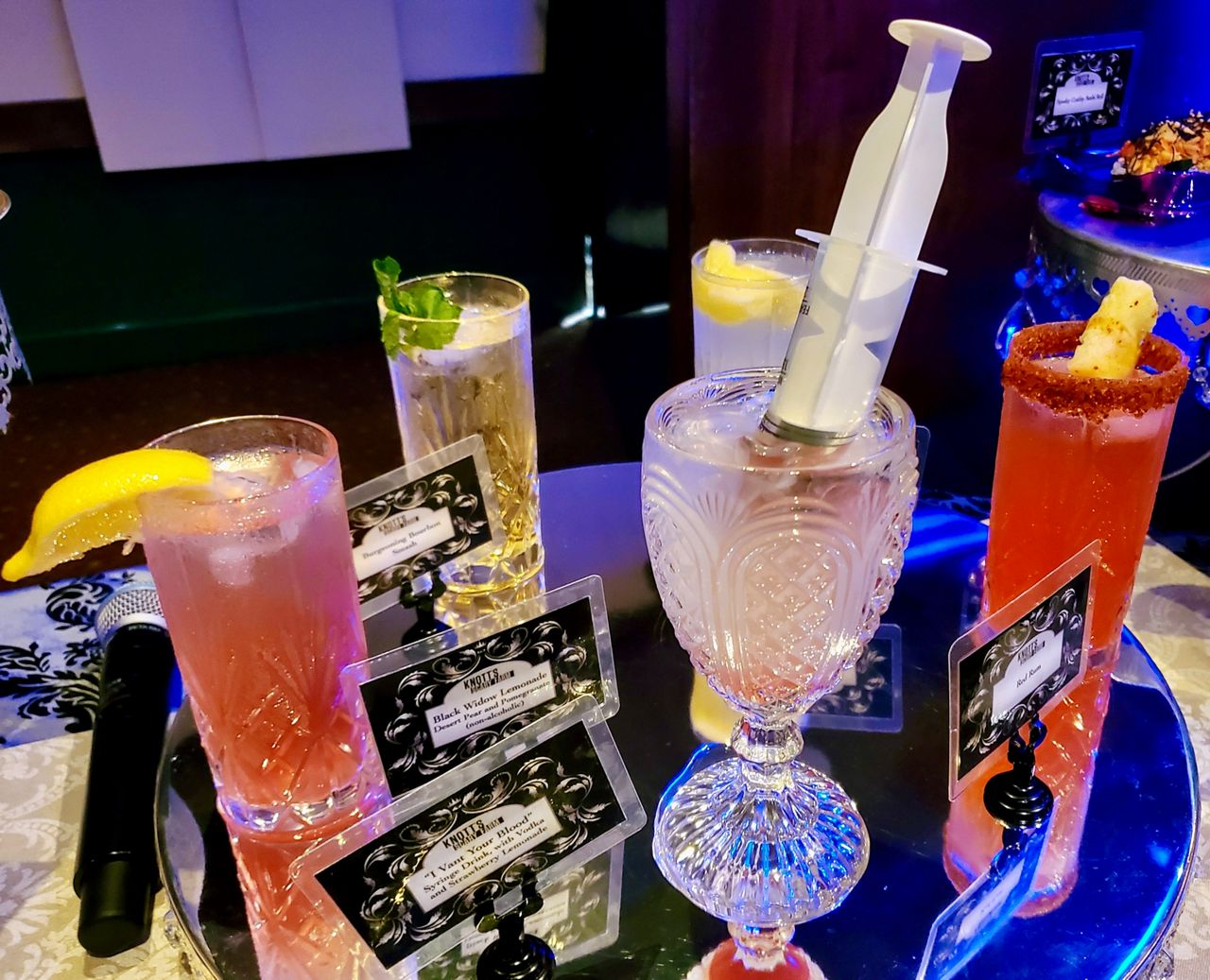 Seymour said some drinks like the Black Widow lemonade are also available inside blood bags to add to the spine-chilling-themed fun.

"So you can get these drinks inside a blood bag, walk around the park and suck it," said Seymour.

Dessert is just as fun and scary. The "It's alive rice Krispie treat" is a green rice Krispie treat that looks like Frankenstein's monster. They offer a pecan pie brownie bomb and "Murder Us" s'mores funnel cake.

And, of course, fall and Halloween wouldn't be what it is without candy corn, pumpkins and squash. The Knott's team incorporates those flavors in some food and drink items. 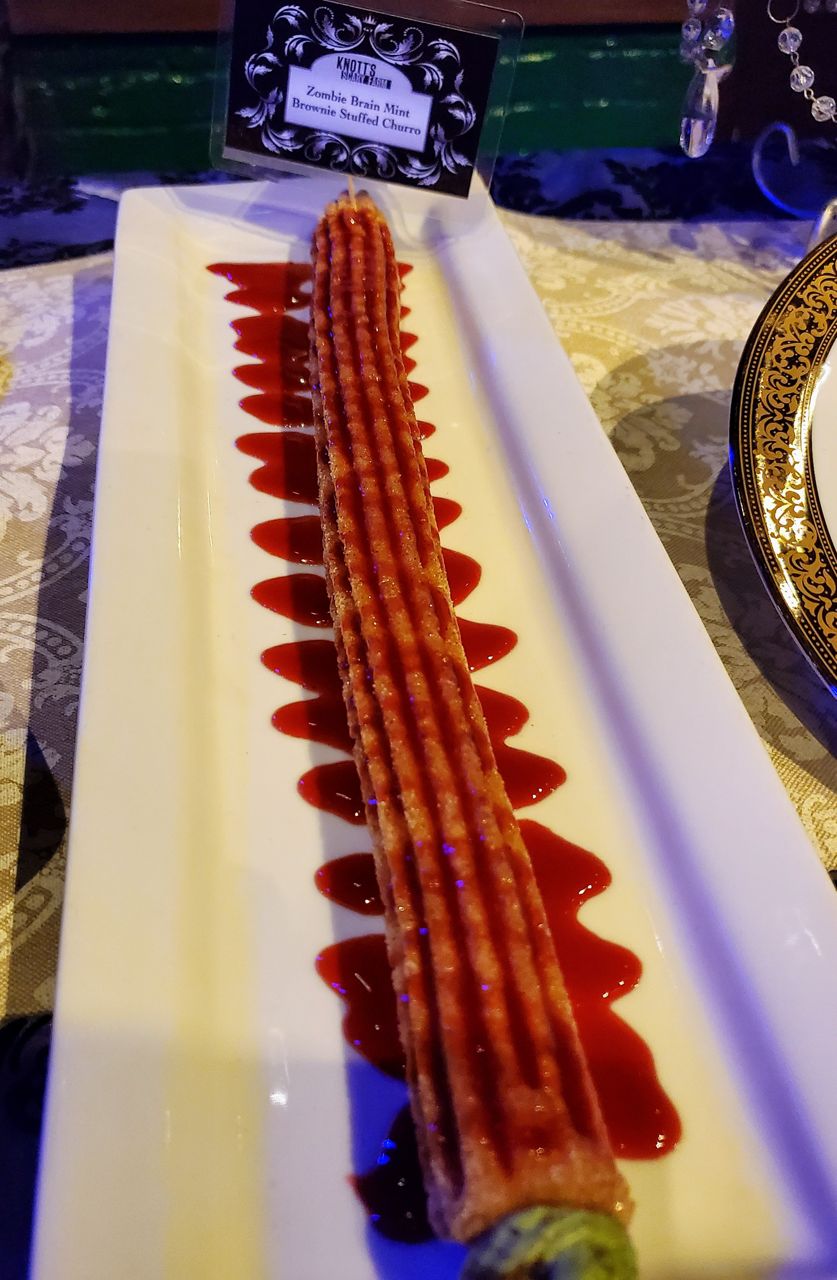 Seymour said that coming up with all these types of food is a year-long process.

As the team rolls out this year's horrifying menu items, they are already busy developing concepts for next year's Scary Farm.

"We're always thinking of scary stuff," he said. "What do people want to eat during the Scary Farm time? So we come up with many items, and around this time of year, we want to use available ingredients."

When the team went over concepts for this year's Scary Farm, they knew they wanted gumbo on the menu. But how were they going to make it creepy?

"We were all like, 'Oh gross,'" recalled Seymour. "But it looks fun and great like that. It kind of creeps people out."

But some ideas, though, were too extreme even for a scary event.

For the creepy calamari, initially, Seymour wanted to fry the whole body of the squid with its head and tentacles and propped up on a wooden stick.

Seymour said there are several rules of thumb the team follows when coming up with food and drinks for the event: It has to have some spice, kind of creepy and fun to do. Most items should also be grab-and-go, something people can buy and eat as they head to their next maze or scare zone. 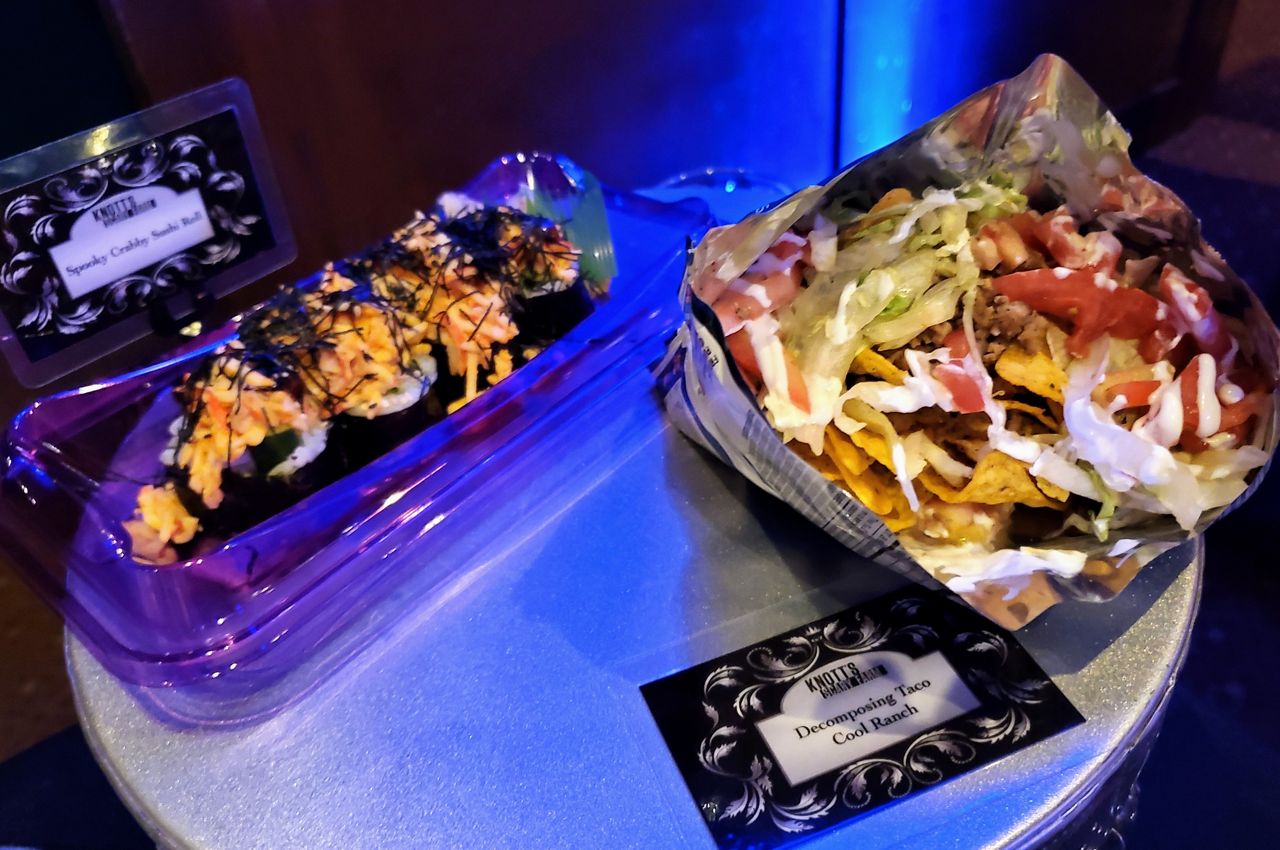 The decomposing taco fits the bill: ground beef, shredded cheese, lettuce and diced tomatoes, and tortilla chips inside a bag.

"People love it," said Seymour. "Everything is thrown in the bag. They can shake it up and eat it from the bag."

Seymour knows not all the concepts the team creates will be well-received.

Some of the items presented during a media preview of the event on Thursday had mixed reviews. Some reviewers loved them — others not so much.

In terms of sales, Seymour said, the Hollow's chicken and hatch chili pizza pie isn't going to sell as well as the traditional plain cheese or pepperoni pizza.

But it's good and essential to have, he said.

"You want different tastes and flavors in the park," he said. "This is an opportunity to bring something new to Scary Farm, and it's always fun to do something creepy."