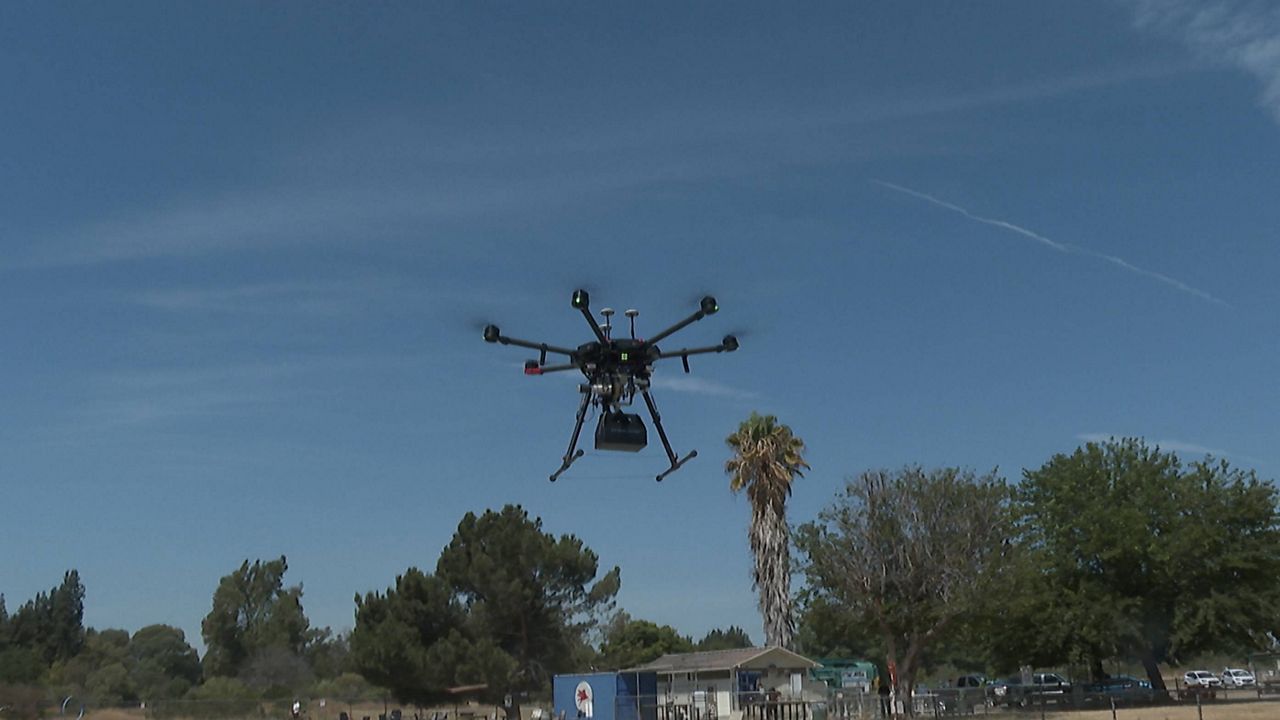 Drone deliveries and electric air taxies on the horizon for SoCal

LOS ANGELES — Pulling a massive piece of technology out of his car, software engineer Evan Hertafeld gave a glimpse of what could soon be a regular sight in the sky — delivery drones.


Hertafeld is the co-founder of a company called A2Z Drone Delivery. Initially, it was launched by CEO Aaron Zhang as a drone delivery project at Brown University in 2016.

He spends his days figuring out how to make deliveries safe, minimally obtrusive while keeping privacy concerns in mind.

Their latest design is called the RDS1, or Rapid Delivery System.

“It lets us deliver a package from 100 feet in the air without getting anywhere near to the ground,” Hertafeld said. “It just lowers down on this hook.”

Hertafeld demoed the technology for Spectrum News, safely delivering a carton of eggs from the sky. However, he said it will be several years until anyone can order eggs using drone delivery due to Federal Aviation Administration regulations.

Some drone operators are allowed to make deliveries in Southern California but they are flying in tightly controlled environments and the drones have to remain in sight the entire time, unless they apply for a waiver according to the FAA.

Drone makers can also apply for a type certification based on their design.

“Everyone is still figuring out what is the best drone to fly,” Hertafeld said. “But that is going to be the frontier for when these things actually start rolling out. There will be these very specific certified types of aircraft that the FAA has scrutinized very strongly.”

Drone deliveries are not the only aircraft on the horizon.

Electric air taxis are coming, too.

Sam Morrissey and Clint Harper are with Urban Movement Labs (UML), a public-private partnership with the City of Los Angeles. They are working with the city to study the impact of air taxi services on issues like public airspace, property rights and regulations and how they could shape LA’s airspace as part of a year-long Urban Air Mobility Partnership.

“It’s really looking at integrating aviation within the city,” Harper said, who is an urban air fellow at UML. “Instead of having aviation exist just in airports, out on the periphery, how do we start bringing in aviation closer into urban cores, into more densely populated areas and how do we do that safely, efficiently and do it in a way that adds value to the transportation system as a whole.”

Electric air taxis are already in the works as Silicon Valley-based Archer Aviation partnered with LA to launch a flying taxi service in the city. They could roll out in late 2023.

Morrissey, the executive director of UML, said the goal is find out how it will affect residents before they start flying and they do not want air taxis to be simply another way for very wealthy people to travel.

Meanwhile, Hertafeld said his company is already working on a drone that can deliver two packages, with more weight. They are currently evaluating whether the drone delivery technology could work for search and rescue efforts as well.

“We can do medicine, we can do water, we can do thermal blankets,” he said. “There is a lot you can put into five pounds.”

CORRECTION: A previous version of this story incorrectly stated the company was already working with clients, who use their drones to deliver goods, for search and rescue efforts. The error has been corrected. (Aug. 2, 2021).