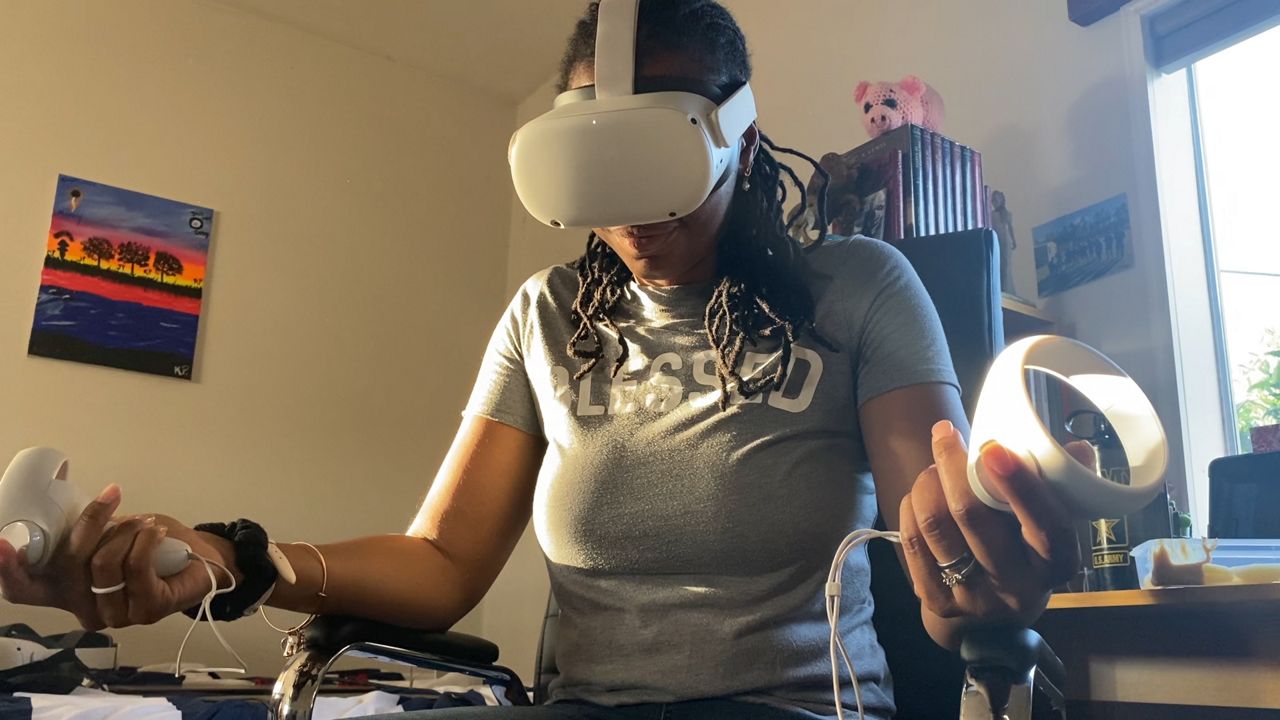 LOS ANGELES — For Krysta Piper, religion and spirituality are a way of life. She's an army chaplain who lives in Mid-City and serves as a pastor to army reserves" based in Los Angeles.

"I minister to the army reserves on a monthly basis, we are the unit ministry team, I feel like God called me to this work specifically," Piper said.

So when she stopped attending church services over a year ago due to the pandemic, Piper felt lost. Attending church on a Sunday was part of her weekly ritual — one she cherished.

"I love attending church any day of the week, it's important to me because it says in scripture, not to forsake the assembly of God's people, so I want to be there with the people," Piper said.

She began researching ways to attend church online that went beyond live stream services that have become ubiquitous during the COVID-era and found Virtual Reality Church. To attend, she puts on a VR headset from the comfort of home and suddenly she's in a whole new world — VR Church world.

She enters a digitally rendered church building and is surrounded by other congregants who greet one another warmly. Everyone's avatar is customized to their preferences — Krysta  wears a long blue skirt and polka dot head wrap. She uses a hand held remote to direct her avatar around the space.

"People come up next to you, and it feels like we are all really together," Piper said.

VR Church is designed, built, and run entirely online. It was founded in 2016 by D.J. Soto, an ordained Bishop. He was experimenting with virtual reality and realized he could marry this new technology with his religious work.

"My wife and I were pastors at a physical church for many years," Soto said. "We got a VR headset in 2016, and it was the first time you could purchase VR equipment online — it blew my mind and I thought, I would love to start a church here."

VR church was founded later that year and the congregation has continued to grow. People attend from around the world using VR headsets. The typical price to buy a headset is about $300 online, and Soto said, the opportunities via VR church are unending.

"VR Church allows people to be part of a community and use their gifts, in a way they otherwise wouldn't have been able to do," said Soto. Several people in the church are homebound, Soto explained, "In VR Church we have this opportunity for people to volunteer and express their gifts in ways that may have been limited to them before."

Piper agrees, and said for her, VR Church provides the same spiritual connection she experiences in a physical church. "I feel God when I'm at VR Church, the spirit is just always there," she said.

Everything about VR Church is experiential. There are no physical Bibles needed — instead verses are projected into the air. At Christmas rather than talk about the story of Bethlehem, Bishop Soto and web designers create a virtual Bethlehem that church goers can walk through.

"I'm not delivering a sermon on stage about Moses and the Red Sea, we will build it in VR and walk through it as avatars," Soto said.

The church is constantly pushing boundaries about what religion can look like, but for Piper, the best part of VR church is how it connects her back to herself. "You feel like you are taking part in something spiritual and divine," she said.