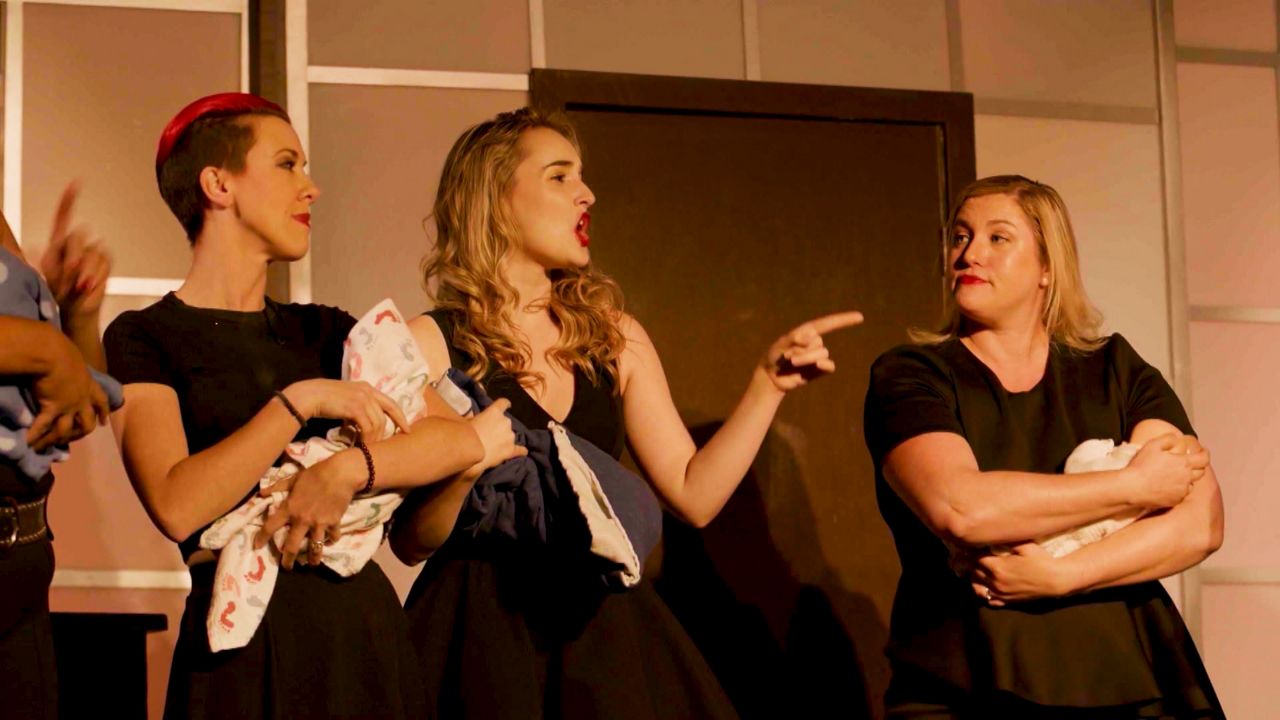 Let’s be honest. The female bosom has been the focus of artists since the dawn of time from paintings to sculptures to, of course, Hollywood.  But Jennifer Goodman noticed a glaring omission.

“There’s not really a play or a musical about boobs,” Goodman said.

Well, now there is. Life in Boobs is written and directed by Casey Christensen, who didn’t play coy with the title.

“I knew people would pay attention,” Christensen said. “It would definitely be an envelope that got opened.”

The show dives into all things décolletage and everything is fair game, the good, the bad, and the stuff we really never talk about.

“We have a joke about nipple hair in this show,” Christensen said. “I mean, it’s like, we’re going there.”

Christensen clearly has a lot to get off her chest and all of it is true. Even the talking breast pump because any woman who has ever used one will tell you, they have heard it talk.

“I wish I could say this is hyperbole because it’s nuts out there,” she said. “It ain’t easy.”

And neither was writing it. It was Goodman who came up with the idea for the show, but she is not a writer. Then one day, she caught Christensen performing in an original comedy and a collaboration was born.

MORE FROM THE SOCAL SCENE:

“I thought it was going to be scenes, little monologues, maybe on barstools,” Goodman said, “but Casey took it to a whole different level.”

It has been a long process. Christensen has spent roughly a decade writing, rewriting, and tinkering with the play while working and raising a family. Then, 2 and a half years ago, something happened.

“I had sudden ….I can’t even pronounce it.  I lost my hearing in my left ear,” Christensen said.

It is called Sudden Sensorineural Hearing Loss. It was a lot to come to terms with but she knew one thing for sure.

“I’ve got to get this show out so I can hear it, you know,” Christensen said. “And that was it. I stopped messing around and I said we’ve got to put this up.”

Every Saturday night Christensen ascends this staircase into what some might consider hallowed comedy ground. She has seen shows at Second City, but this is her first time performing here.

“When you walk up those steps you get the little tingles and when you see Gilda Radner, you get all the feels,” Christensen said.

Second City isn’t just a theatre, it is also a school of comedy and cast member Leslie Rubino is a recent graduate.

“The songs give me life,” Rubino said of the musicals catchy tunes which she admits have gotten stuck in her head.

Christensen, who has never written a musical, came up with the lyrics while Rachael Lawrence wrote the score.

One of those parts is powerful song called “Diane,” about a woman who is diagnosed with breast cancer. It is a topic Rubino familiar with.  Her mother-in-law, Laurie Rubino, passed away in 2015 after battling stage 4 breast cancer. She was just shy of turning 60.

“Getting to do this show and knowing that I’m going to be singing this song was a little scary because it was so connected and it was very personal,” Rubino said. “When my husband first saw the show I knew it was going to be even harder for him but he gave me such a big hug and he was like, ‘you know she was proud of that.’ So that helps being able to have a tribute to her every single night.”

“People are coming up to me after every show and they are cracked open,” Christensen said. “They come up to me and they tell me their story. And as the writer it’s very gratifying to feel that I’ve helped create something that has touched so many people.”

Including people who haven’t even seen it. A portion of the show’s proceeds are being donated to Susan G. Komen Los Angeles.

Seeing her idea come to life has been thrilling for Goodman and this is just the beginning. Christensen has big plans.

“I want to take this show to Off Broadway, baby,” said Christensen.

“It’s really rewarding,” Christensen said. “It’s better than bowling, no offense to bowlers out there.”

Life in Boobs is playing at Second City Hollywood every Saturday at 10 p.m. through December 14. Tickets and information can be found here.