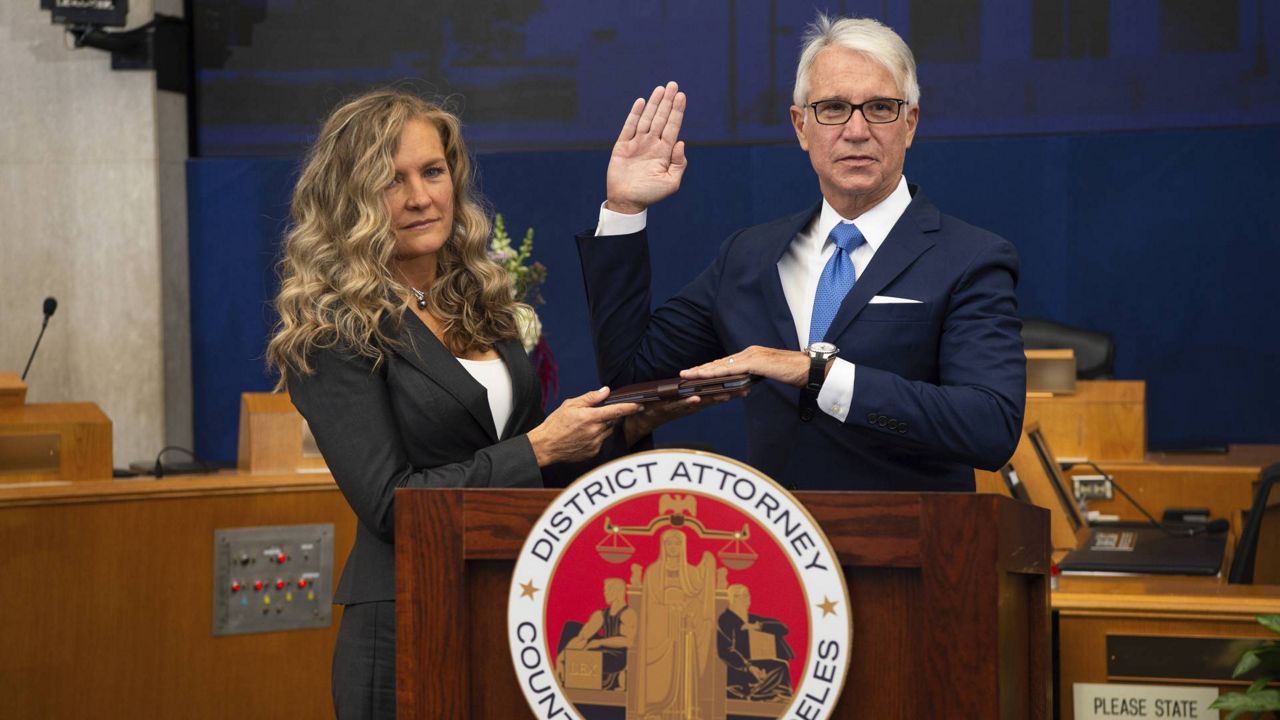 In this photo provided by the County of Los Angeles, incoming DA George Gascón is sworn in as his wife Fabiola Kramsky holds a copy of the Constitution during a mostly-virtual ceremony in downtown L.A., Dec. 7, 2020. (Bryan Chan/County of L.A. via AP)

Families of Crime Victims Speak Out on Gascón's Controversial Reforms

LOS ANGELES — For the first time in nearly four decades, Connie and Bob Vargo of Anaheim Hills can look at photos of their late son, Jeffrey, with some sense of relief.

Last week, they received word that the man charged with kidnapping, sexually assaulting, and killing their 6-year-old son in 1981 will be sentenced to life in prison without the possibility of parole. The plea deal struck despite newly-elected Los Angeles County District Attorney George Gascón’s sweeping reform effort to get rid of life sentences.

"We’re in shock," said Connie. "We’re happy not to be sad, if that makes sense. We know something is finally done."

The murder suspect, who pleaded no contest, is Kenneth Rasmuson of Sandpoint, Idaho. He was linked to the murder of the Vargos' son in 2015 through DNA. Rasmuson had already served two separate prison terms for child sex crimes, including one for sodomizing a 3-year-old boy.

Rasmuson's new arrest for the murder of Jeffrey and another 6-year-old boy in L.A. thrust the Vargo family into a criminal justice system they didn’t know how to navigate. Connie explained how they spent the last two months wracked with nerves and reliving the trauma of their son’s death when they learned Gascón’s prosecutors filed a motion to dismiss sentence enhancements in Rasmuson’s case.

"I think it’s disgraceful, and he has no idea what it’s like to be on the other side of this," said Connie. "What if this was his 6-year-old grandson?"

She added that their biggest fear was the possibility that their son’s killer would eventually qualify for compassionate release if he got elderly or sick or be granted parole — something Gascón’s team told Spectrum News 1 wouldn’t have happened.

“The legal system is too nice to the criminal, too lenient,” said Bob Vargo.

The Vargo family's case is just one example of how Gascón’s controversial actions to reform the criminal justice system has become a lightning rod issue.

On the day he took office, Gascón moved to eliminate enhancements and special circumstances that lengthen prison sentences, halted the practice of trying juveniles as adults, instructed prosecutors not to seek cash bail, and took the death penalty off the table in L.A. County. His reforms sparked passionate backlash from victims’ families, including the Vargos, who feel Gascón isn’t tough enough on crime.

Still, others say the changes Gascón is trying to implement are long overdue. Yvonne Blakely Trice of Pomona lost her son to gun violence in 2015. Her son had spent more than a decade in L.A.’s prison system.


Trice’s son, Monte Russell, served a 13-year prison sentence that included enhancements for an assault with a handgun. She explained how during his term, he lacked resources like mental health counseling, life skill-building, and rehabilitation.

“I believe in justice, and I believe too that there’s a different way of handling each individual,” Trice said.

Just three months after Trice’s son was released and trying to get his life back on track, he was shot and killed. The crime remains unsolved, but Trice believes he was killed by gang members.

She added that even if the killer was caught, she wouldn't want sentence enhancements and instead would pray for their rehabilitation.

“That’s not going to be bring my kid back, so my strong opinion is 'no.' I don’t think they should have enhancements. They should serve the time, though,” said Trice.

Gascón has said that he respects victims who want him to impose the maximum punishment in their case, but he pointed to research showing that excessive sentencing practices actually exacerbate recidivism, leading to more victims of crime.

Connie Vargo and her husband, however, feel some crimes are just too violent, malicious, and evil to approach with what they consider a “cookie-cutter” ban on enhancements. They support a new effort launched by victims' rights advocates to start a petition to recall Gascón. They agree that reforms are needed in the overall criminal justice system, but they added that each crime and individual accused are different and should be evaluated on a case-by-case basis when deciding prison terms and punishment.

“There’s not one-size-fits-all for criminals,” Connie said. “I’m sure there are people in prison that may be reformed in some way or another, but I just don’t think it’s a blanket for everyone.”