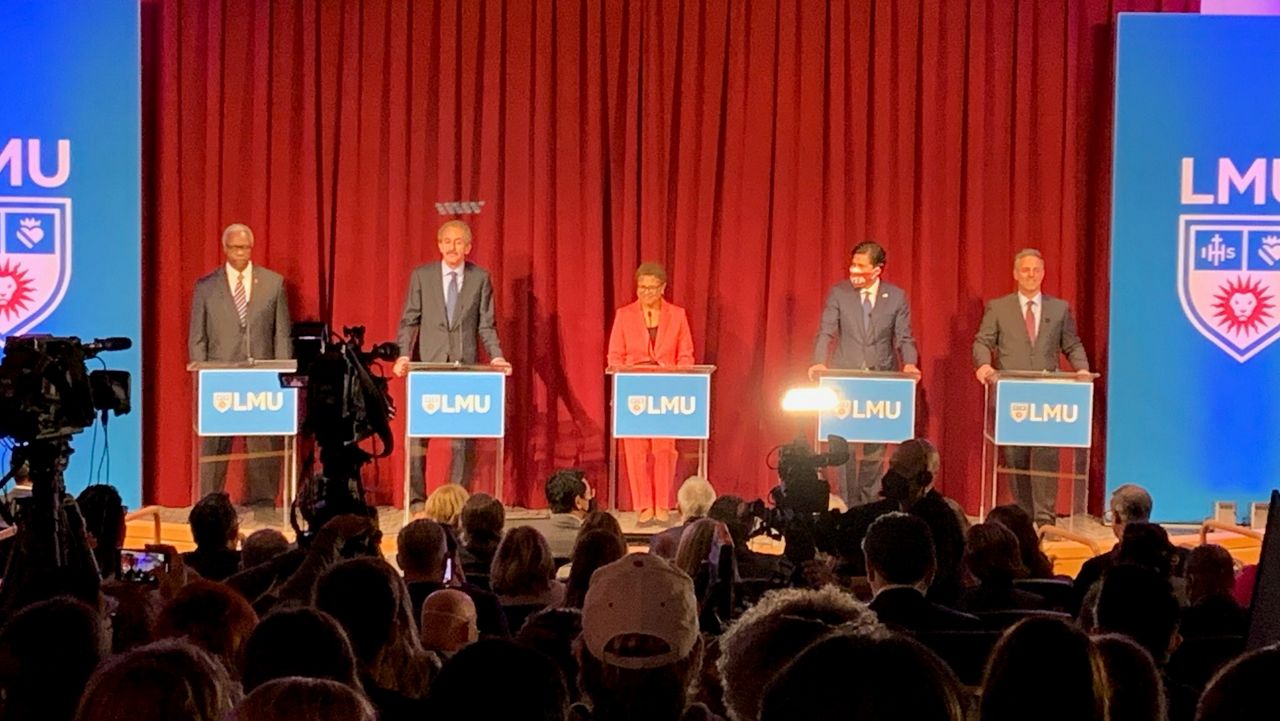 LOS ANGELES — The first debate among five of the six candidates for LA mayor descended into chaos Tuesday night, as multiple hecklers interrupted the politicians’ answers to scream obscenities. Six separate protesters popped up out of the crowd during questioning over the size of the Los Angeles Police Department and were met with boos, jeers and calls for them to be thrown out, which they were.

All six are vying to replace LA Mayor Eric Garcetti, who is expected to vacate the role this spring once he is confirmed to serve as U.S. ambassador to India. The primary vote will be held June 7.

Moderated by LMU Political Science Professor and Thomas and Dorothy Leavey Center for the Study of Los Angeles Director, Fernando Guerra, the debate kicked off with a simple question based on a recent LMU poll: Do you agree that homelessness is the No. 1 issue facing Los Angeles? Wilson was the only one of the five candidates to disagree.

When Guerra asked what each candidate planned to do about it, de León shared that he was once homeless in his 20s and said he is already doing something about it, having transformed three hotels into temporary supportive housing in El Sereno and created the largest tiny home village in the U.S. in Highland Park earlier this year.

Councilmember Buscaino also said that what he would do for homeless “is what I’ve done already.” He said he has been able to house half the people living on the street in his district through a combination of emergency housing, bridge shelters, permanent supportive housing, safe parking and a tiny home village. He said he would activate an emergency operations center and would dock the pay of elected officials if the city didn’t meet certain thresholds within 36 months.

Calling homelessness a “death sentence,” Bass said she would declare a state of emergency her first day in office as mayor to speed up the building of temporary and permanent housing. She also said the city “needs to address why people are unhoused to begin with,” citing skyrocketing rents, mental health issues and substance abuse problems.

Feuer also said he would declare a state of emergency on his first day in office and appoint a deputy to consolidate all the authority of the mayor’s office to help solve the problem. He said his general manager would cut the time to approve homeless housing and slash the $600,000-per-unit cost of building permanent supportive housing with a private equity fund.

Declaring himself “a housing guy,” Wilson said homelessness is a serious problem that can be solved, “but we have to look deeper” at why it’s happening. He cited low wages, high rents and people falling through the cracks. “There’s been no focus on the middle class,” he said. His solution: using abandoned commercial buildings and cargo containers to provide temporary supportive and permanent housing and help the homeless get treatment.

It was during this section of the debate that the first heckler piped up, first confronting Buscaino, then Bass, then Feuer. “None of you represent the will of the people,” one of the hecklers said. “You are all puppets of the LAPD.”

Bass said she would increase the LAPD by 200 officers. “All Angelenos want to live in safe neighborhoods and want the police to respond quickly and appropriately.” She said “policing should be equal across the city: there shouldn’t be a guardian-style policing in wealthy areas and warrior-style policing in communities of color. We cannot arrest our way out of our problems.” She added she would open an office of community safety that would use proven community-based programs to promote public safety.

Wilson said he would increase the number of police by 1,500 officers and compliment them with 350 mental health and other caseworkers. He said he supports “community policing where everybody works together.”

Buscaino also said he would expand the community safety program that exists in Watts to the entire city. He also suggested that officers recruit LA residents with financial incentives.

Feuer called for reforming the LAPD as the number of officers is simultaneously increased. He called for civilian ambassadors in police stations to make them user friendly, as well as community-based violence prevention programs.

De León said “before we start talking about hiring thousands of police officers, we will utilize resources more effectively and efficiently.” He proposed hiring more mental health specialists to deal with what he called “an open-air asylum on our city streets” and changing the culture of the LAPD starting with its LAPD Academy.

Responding to the half dozen hecklers who had confronted the candidates, Guerra asked, “You’ve seen the outbursts, civic discourse or the lack thereof. Is this what you expect throughout the rest of the campaign? How do we engage in a civil way? How do you respond to what you’ve seen?”

Buscaino was first to respond, quipping that the event’s security guards should be paid extra and that the hecklers were part of the Democratic Socialists of America. “We’re seeing this toxic behavior not only on social media, but here in mayor debates. This is clearly out of hand. We have First Amendment rights, but it does not give you the right to disrupt and be an idiot,” Buscaino said, at which point he was heckled by a sixth stranger in the crowd.

“I don’t know who these people are or what organization they’re affiliated with,” Bass said, “but this is indicative of the discourse in our country right now.” Bass said she was in Washington, D.C., during the insurrection on Jan. 6. “This is why I decided not to run again and to come home [to LA] because I’ve been so concerned about the level of discourse right here in LA. I think we are at a crossroads. We can go in two different directions in our city right now: we can turn toward each other and solve our problems or turn against each other.”

Of the five candidates, Wilson was the only one who did not support a vaccination mandate for all city employees, including the Los Angeles police and fire departments.

Based on an LMU survey that found 75% of LA residents believe there will be another pandemic, Guerra asked the candidates what they would do to prepare the city for the next pandemic or the next coronavirus variant.

Feuer said the city needs clear and consistent rules and to train and plan for the next pandemic in the same way the city trains and plans for earthquakes.

Bass proposed working with community clinics to make sure they have resources, to stockpile PPE and to have a reserve fund to help families and communities and businesses stay open.

De León and Buscaino both support the city creating its first public health department. De León has already proposed such an ordinance in City Council and Buscaino supported it.

Wilson looked at the issue through a housing lens, suggesting that the reason Black, Brown, and Asian communities died in higher numbers during the pandemic was because of overcrowding. He suggested creating more housing opportunities.