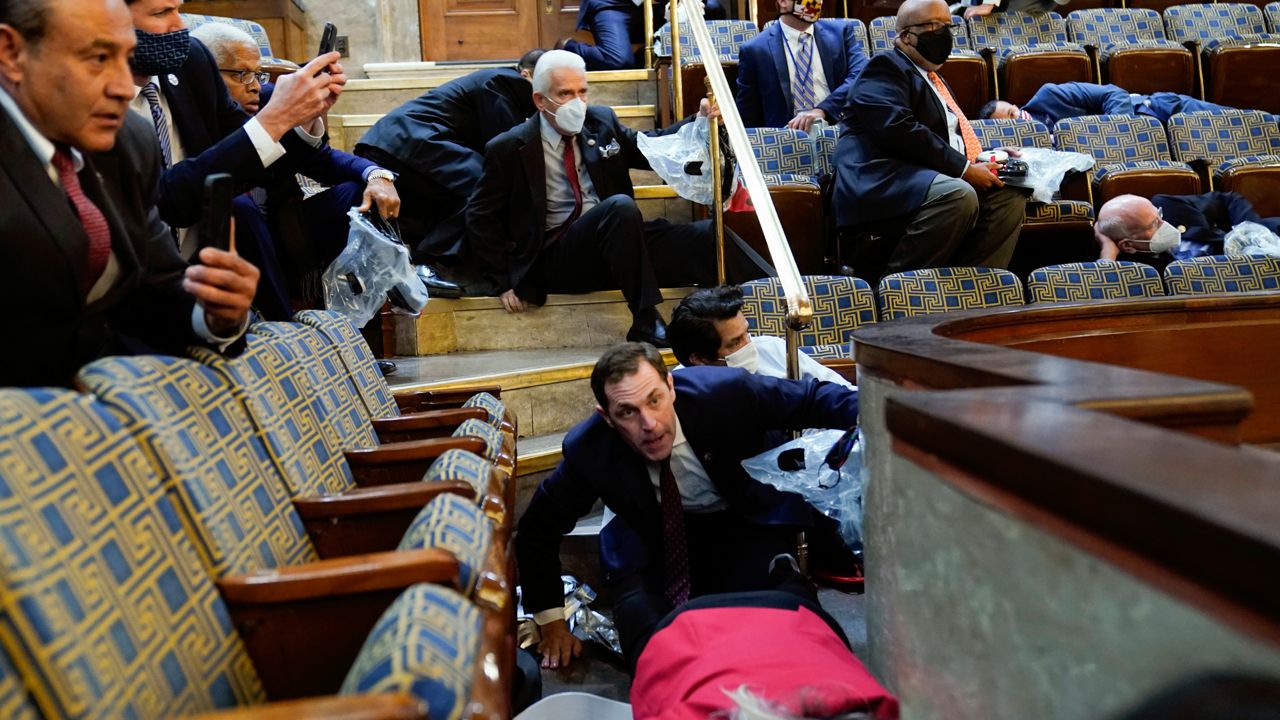 Members of Congress shelter in the House gallery as rioters try to break into the House Chamber at the U.S. Capitol on Jan. 6, 2021, in Washington. (AP Photo/Andrew Harnik, File)

SANTA ANA, Calif. (CNS) — A year on from the insurrection that rocked the U.S. Capitol, Southern California House of Representatives members interviewed this week say they remain concerned about the nation's future.

"It was a year ago, but I think about it every day," Rep. Lou Correa, D-Santa Ana, told City News Service. "It's something that has not moved on. I think the repercussions, the full extent of the repercussions of Jan. 6, are still to be seen."

Correa was in the rotunda of the Capitol as rioters charged the doors while Congress was in the process of certifying the election of President Joe Biden — normally a routine part of the electoral process.

"I remember the smell of tear gas, the loud pops, the gunfire, the loud alarm, the look of sheer terror and confusion in the eyes and faces of the Capitol Police, who were supposed to protect us. They were outside of their normal operations. They didn't know what to do. It was pure chaos."

But above all that, there is an even more disturbing memory, Correa said.

"What I remember the most was myself as a human being preparing for the last moments I could probably be alive, and worse than that psyching myself up, getting myself up to go and take out another American," Correa said.

"I wasn't going out without taking someone down with me. ... I said, if I'm going out, I'm going to take one or two with me, but to have that thought as an American, a patriot, to think this was who I'm going up against ... I mean, you've got guys, you've got people running through these hallways waving the same flag that I pledge allegiance to every day. It is a total change in the way I look at the world."

Correa said that since the 9/11 attacks he has been "conditioned" to view terrorists as largely foreigners.

"These people who came in to the Capitol were essentially fellow Americans, and that's what bothers me the most," Correa said.

"I fear our nation is deeply divided and it pains me to think I had to give myself up, to get myself motivated to work up to go after another American, to go after their throat knowing they were after mine as well. That's what breaks my heart."

Correa emphasized that he does not view it as a partisan issue.

"This is an issue of an erosion in our confidence in our electoral system and democracy, and this is not good," Correa said. "I think the answer is we've just got to remember who we are and start working together and stop talking across each other."

Rep. Alan Lowenthal, D-Long Beach, said tensions remain, and that the nation hasn't gotten past the trauma of the violent attack on the Capitol.

"It's like a wound, it's a psychological wound," Lowenthal told CNS. "And that wound should be healing after a while. Then we'd be back to where we were, reaching out, not agreeing, but that wound has never really healed. It's like an open sore. And it's really important that we do heal and be able to call upon not just our own close friends, but to call upon our colleagues to help us heal."

Lowenthal said he has prided himself on his bipartisanship, but those relationships with members of the other party remain strained.

"There's been a tremendous strain that has taken place, but many of my Republican friends I have not really spent a lot of time with have reached out to me and say they miss our close relationship ... but there has been a strain on our relationships," Lowenthal said.

Lowenthal was on his way to the Capitol to join in the process of certifying the election when he heard pounding on his office door. He worried initially that it might be the protesters.

"I had been planning to go over to the Capitol, but then the Capitol Police came over and said we're evacuating," Lowenthal said. "I never did get to the floor of the Capitol."

Lowenthal said he watched the rally led by former President Donald Trump that preceded the insurrection.

"I was terrified that day when the police came into my office and said, ‘Grab your gas mask,’ and I said, ‘I don't have a gas mask,’ and they said, ‘You've got a gas mask. You've got to grab it and take it with you,’” Lowenthal said. "I was overwhelmed."

After he was taken to a safe place in another building, he watched the riot unfold on TV with another colleague. Later that night, when Congress reconvened to certify the election, he was stunned at the aftermath.

"To walk through later that night, to see the condition, the desecration of that building, to talk to people that were on the floor and how frightening it was, it was all very frightening just to be there and frightening to be in [the Longworth building]," he said. "We thought we were going to be attacked also. We were scared. Where do we hide."

Rep. Mike Levin, D-Dana Point, said Jan. 6 is a "vivid memory for me. It was a day none of us will forget. It was one of the darkest days of our history, and we still have a long way to go to recover from that day."

Levin stressed that it was equally important "that we recognize the loss of life that day as a result of that violence. Five police officers. Severe injuries to hundreds of other officers. ... We have to continue to remember them and their families and the civilians who died that day. That's really important and can't be overlooked. Second, we have to hold everyone responsible for that violence."

It is dispiriting, Levin said, that disinformation about the legitimacy of the presidential election's integrity persists.

"What troubles me the most a year later is you still see so many myths and conspiracy theories about the election to this day, and anybody who continues to push disinformation about the legitimacy of the election is doing an incredible disservice to our country and our democracy," Levin said.

"We had a free and fair election in 2020 and Joe Biden got 80 million votes. There were multiple recounts, there were dozens of lawsuits and they were all unsuccessful on the merits. ... We have to end the myths and the conspiracy theories which have infected the body politic."

UC Irvine sociology professor David Meyer said it will be key to see what justice is meted out in the coming year.

"The thing to watch over the next year is, one, who gets punished, and, two, who gets amnesty in effect, social and political amnesty and what do institutional conservatives do?" Meyer said.

"Because people protest after their side loses an election all the time. There's nothing new about that and sometimes it can get heated."

What is "surprising is that institutional Republicans who are supposed to have a stake in the survival of the republic are throwing in their lot with people trying to overturn an election," Meyer said.

In the days following the riot, "the smart money was that regular Republicans would seize the opportunity to be rid of Trump, but that smart money was wrong," Meyer said.

Republicans such as Rep. Liz Cheney of Wyoming and Sen. Lisa Murkowski of Alaska — who have continued to criticize Trump — face challenges from the right, and Meyer fears the country might be in "for a lot of difficulty in the coming years."

Rep. Ken Calvert, R-Corona, said this week he wasn't in the Capitol during the attack, but was in a nearby building and witnessed what occurred.

"Certainly, no matter what your politics, it wasn't a good day," Calvert told the Los Angeles Times. "It's a bad situation."

Calvert, who said he was disturbed by what he witnessed that day and dubbed it "very regretful," said he's confident congressional relationships that have been strained across party lines can be repaired.

"These people are my friends. I may be in a different party and I don't agree with them, but it doesn't mean we can't like each other. ... We're a divided nation, there's no doubt about it. But people expect us to get together, get things done."

"We just got to keep working at it," Correa said. "We have to continue to work on it and make sure and do what we need to do to work across the aisle and continue to unify this nation and make it the best in the world."