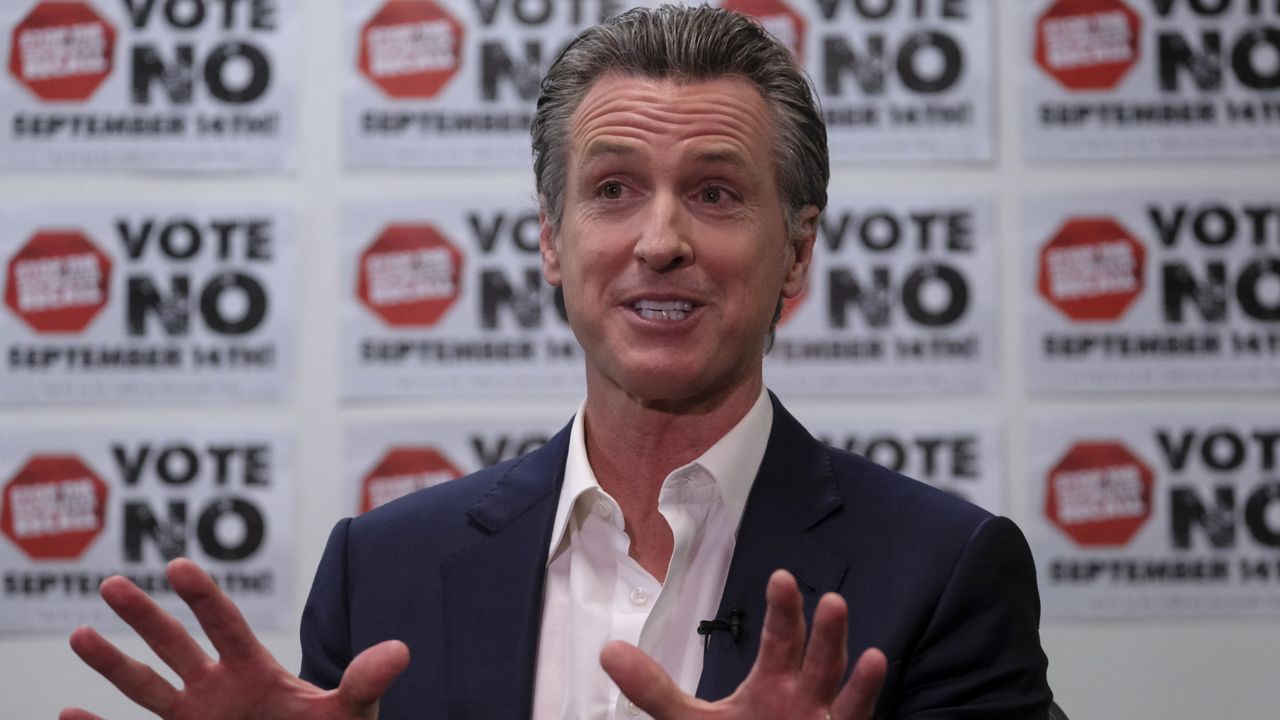 California Gov. Gavin Newsom is photographed during a TV interview before a rally against the California gubernatorial recall election on Sunday, Sept. 12, 2021, in Sun Valley, Calif. (AP Photo/Ringo H.W. Chiu)

LOS ANGELES — Pandemic shutdowns galvanized the effort to recall Governor Gavin Newsom in 2020, but as voters head to the polls the growing homeless crisis may be his weak point, according to polling by Spectrum News 1 and Ipsos.

While 61% of registered voters approved of how Newsom handled the pandemic, only 36% approve of how he’s handling homelessness in the state with more than half disapproving.

Under an overpass in Los Angeles an unhoused man, asked to be called" Roadrunner," gave us a tour of his three-room shelter. A little over a year ago, Roadrunner came out of jail and onto the streets with nothing to his name but a pair of shoes and little hope of landing a job during the pandemic.

His first tent was a gift from a friend that came with a warning.

“He said ‘I’m going to tell you, don’t get used to it because you will.’ I don’t want to get comfortable living like this,” Roadrunner said.

More than a year later, Roadrunner has built himself a home out of recycled materials. He never wanted to live like this but said it could be worse.

Miles away on Skid Row, Amy Turk has been working in homeless services for twenty years. As the CEO of the Downtown Women’s Center, she says the state’s upcoming $2.7 billion investment in converting motel rooms into housing is a move in the right direction, along with $500 million in tax credits for new developments.

“We’re building new permanent, supportive housing here for the Skid Row community on our campus at Downtown Women’s Center, so funding like that is critical to see those projects through,” Turk said.

Governor Newsom’s “California Comeback Plan” will spend $12 billion on homelessness, building roughly 42,000 new housing units in the state. That’s barely enough to house the homeless living in the city of Los Angeles. There’s more than 160,000 homeless living in California, according to the 2020 annual homeless count.

“We’re housing more people than ever but nothing is stemming the tide of people becoming homeless for the first time,” Turk said.

In North Hollywood, homeowner Roxanne Hoge feels like she’s watched California go downhill. She feels like the state keeps spending more money on a problem that keeps getting worse.

“What’s happened in California is it is a one party state so every dream policy has been enacted and come true and we get to see what the end result is and it ain’t pretty,” Hoge said.

Hoge raised four kids here but no longer feels like Los Angeles is a safe place. She says the state of LA sidewalks is a public health crisis that predates the Coronavirus pandemic.

“The growing homelessness crisis is tragic. It’s a human tragedy on an epic scale,” Hoge said.

Back under the 405 freeway, Roadrunner said he knows 17 people who died living on the streets over the past year, mostly from drug overdoses. Roadrunner is 10 years sober.

“I would like to see the streets cleaned up,” he said as he got ready to say goodbye to his encampment. The area is scheduled for a clean-up this week as the city begins enforcing anti-camping laws for the first time since the shutdowns began in March 2020.

“I wasn’t out here long. I learned a lot in a short time. I got through it.”

A few weeks ago Roadrunner got a space in affordable housing, bringing the unhoused chapter of his life to a close.