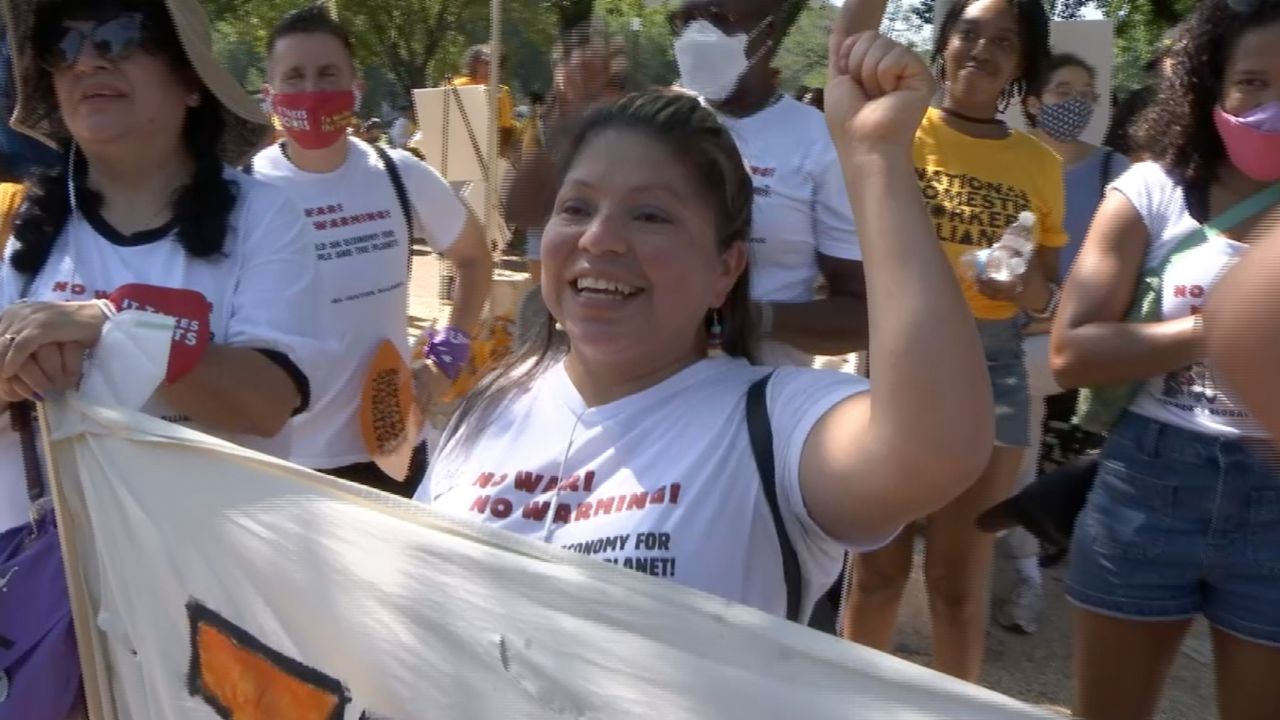 WASHINGTON D.C. — Senate Democrats made a breakthrough Tuesday night on an infrastructure deal, agreeing on a $3.5 trillion figure to invest in climate, education and family programs.

On Wednesday, President Joe Biden met with Democratic senators to lock down support for the agreement though that meeting didn’t include key democrats Sens. Joe Manchin, D-WV, and Kyrsten Sinema, D-AZ. Democrats would need fifty in the Senate to vote in unison through a process called budget reconciliation, but it’s not clear yet what Manchin and Sinema, the moderate Democrats, will do.

Some care workers from California, and across the country, who could be impacted by the outcome of this agreement, are urging those key Democrats to move forward. Thousands, including Californian domestic worker Evelyn Alfaro, marched the streets of Washington Tuesday in hopes of adding pressure on the situation so Senate democrats can pass an infrastructure plan that includes money for their industry.

Alfaro said for too long her essential work had felt unseen and that she gives all her love to her work and employers, yet it’s not reciprocated. She’s demanding $400 billion for care workers, people employed to support vulnerable or disadvantaged people or those under the care of the state.

The plan would give home health workers more chances to unionize and increase wages while securing better benefits and training opportunities. Alfaro pointed how it’s women of color who mostly work in the home care industry, barely getting paid enough to support a family.

She wants to dismantle what she sees as structural racism.

Alfaro said this infrastructure package could be a door to fair pay and that it represents hope for all care workers, who, in California, are risking their lives working in areas affected by wildfires and other climate issues.

The infrastructure packages are likely to split twofold. The first, worth around $1.2 trillion, focused on transportation, water and broadband, is still going through negotiations where lawmakers can’t seem to agree on how to pay for it. They do plan, however, to reach an agreement as soon as this week.

The second, worth $3.5 trillion, could include what Alfaro wants, as well as money for childcare and climate. It's garnering support from Democrats but is still short two key votes for passage. The full details about what is included in the deal have not been revealed.

This package is unlikely to garner any GOP support and could even affect their decision on the bipartisan bill.

“What Democrats say they want to force through this summer through reconciliation would make our current inflationary mess look like small potatoes,” Senate Minority Leader Mitch McConnell, R-KY, said. “Nobody seriously thinks our country needs another gigantic overdose of over-borrowing, overspending and overtaxing and this isn’t what the American people voted for either.”

Alfaro said to Congress that this next step is in lawmakers’ hands. She said this package has the potential to dignify care workers who feel invisible.

Senate Majority Leader Chuck Schumer vowed to hold votes for the budget resolution and bipartisan bill before the August break, though there are some concerns for the ambitious pace.

It’s possible these votes or the bill won’t come until the fall.