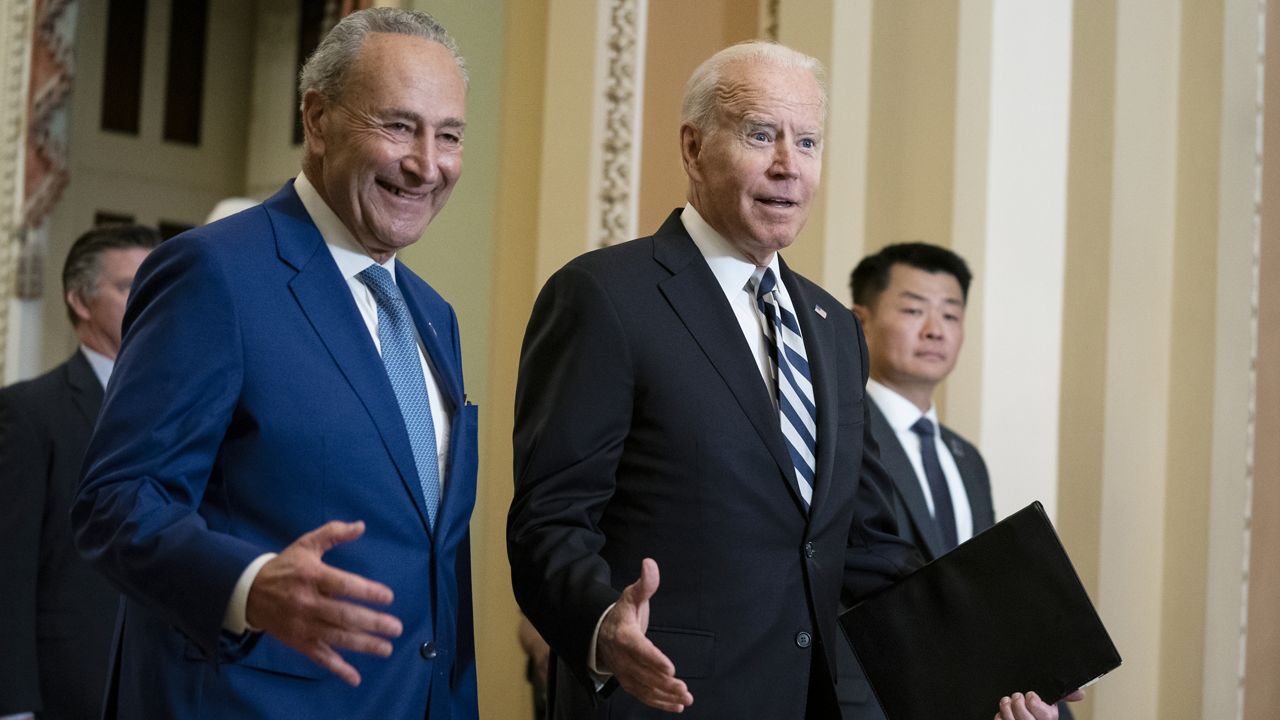 Biden meets with Senate Democrats on $3.5 trillion budget measure: 'We're going to get this done'

Senate Democrats announced Tuesday night that they reached an agreement on a $3.5 trillion budget reconciliation measure that would include spending on climate change, as well as education, health care and family programs sought by President Joe Biden.

President Biden met with Democrats at their luncheon on Wednesday to discuss the measure, his first such first working meeting with lawmakers at the Capitol since taking office.

Biden made his return to the Capitol on Wednesday, where he served for decades as Delaware's representative in the Senate. "Is this my homecoming?" he joked.

Happening now: @POTUS is on Capitol Hill attending a Democrats’ lunch to discuss the $3.5 trillion plan to fund his agenda.

"We're going to get this done," Biden pledged before walking away with Senate Majority Leader Chuck Schumer.

According to a readout of the meeting provided by the White House, Biden thanked the gathered Democratic lawmakers for their "groundbreaking" work on reaching this agreement and "highlighted that it would grow the middle class, generate strong economic growth, and create millions of jobs."

Biden also thanked lawmakers for passing Biden's $1.9 trillion COVID relief bill, the American Rescue Plan, and touted the bipartisan infrastructure framework, the $1 trillion agreement on "hard infrastructure" items such as removing lead pipes, expanding access to high-speed internet, improving transit and rebuilding roads and bridges. The bipartisan pact was the subject of a meeting Biden had later Wednesday with a group of mayors and governors of both parties.

The president emphasized the need for his proposals to help bolster the economy, and said that "the means for funding these critical investments is popular with the American people, who know that the wealthiest individuals and corporations often pay a lower tax bill than teachers and firefighters."

Biden also "repeatedly hit on how the effects of climate change are undeniable, and that the public is demanding action that the budget resolution will deliver."

Connecticut Sen. Chris Murphy said Biden urged them to consider whether the reconciliation bill would help people in his blue-collar hometown of Scranton, Pennsylvania: "His point was that we need to be thinking about folks who have given up on democracy."

After the meeting, Biden declined to comment, but said that "it’s great to be home, great to be be back with all my colleagues and I think we’re going to get a lot done."

“We know the road ahead is gong to be long. There are bumps along the way,” Schumer said earlier Wednesday, but noted that Democrats would press ahead because “we must make average American lives a whole lot better.”

The plan has yet to be released. The measure will include a "robust expansion" of Medicare to add more funding for dental, vision and hearing coverage, Schumer said.

According to a senior Democratic aide, the bill will also include funding for paid family leave and universal pre-kindergarten, as well as other social safety net and other education programs, as well as major funding for climate initiatives, including funding for electric vehicles.

Per the aide, Democrats will also propose extensions of tax credits for children, child care and some low-income people; money for environmentally friendly energy technologies and a federal standard aimed at encouraging a shift to clean energy.

The plan would also fund a pathway to citizenship for many immigrants, the aide said.

"We are very proud of this plan," Schumer said Tuesday evening, flanked by all 11 Democrats on the Senate Budget Committee after a two-hour evening meeting that capped weeks of bargaining among party leaders, progressives and moderates. "We know we have a long road to go. We’re going to get this done for the sake of making average Americans lives a whole lot better."

Schumer pledged that "every major program" the president supported will be "funded in a robust way."

If congressional Democrats rally behind the proposal and turn it into a budget resolution they can push through Congress in coming weeks, it would help them enact a subsequent, sweeping bill that would actually fund their priorities.

The budget resolution contains language that would let Democrats move the huge spending bill through the Senate with just a simple majority, not the 60 votes Republicans could demand by using a bill-killing filibuster.

The measure is smaller than the $6 trillion some progressives were seeking, but incorporates President Biden's "human infrastructure" priorities not included in the $1.2 trillion bipartisan infrastructure framework. Work on the separate bipartisan proposal is currently ongoing as well.

The reconciliation bill will require the support of all 50 Democrats to pass, which could prove difficult in attempting to thread the needle between the priorities of progressives, who wanted a larger package, and moderates, who are wary about tax boosts and further ballooning budget deficits.

One of those moderates, Montana Sen. Jon Tester, said that he will vote to proceed on the measure, but noted he wants to see more on how the money is being spent.

West Virginia Sen. Joe Manchin also signaled openness to the measure: "We’re anxious to basically review it. They worked hard on it, we want to see it. Also I’ve been very clear that I want to see the pay-fors and make sure that whatever we do is globally competitive."

"I’m open to looking at everything they provide," Manchin continued, adding: "They’re going to have to provide all the information that’s going to be needed. They worked hard, they should have a proposal."

The Democrats’ goal is to push a budget resolution reflecting Tuesday’s agreement through the House and the Senate before lawmakers leave for their August recess. Budget passage would let Democrats move a follow-up spending bill that actually finances the party’s priorities with just a simple majority in the 50-50 Senate, not the 60 votes Republicans could otherwise require with a bill-killing filibuster.

The actual spending legislation would likely not start moving through Congress until the fall.

Republicans are likely to the effort unanimously, criticizing its costs and likely tax increases. Democrats will be able to lose no more than three votes in the House to prevail.

Biden’s big infrastructure proposals are moving on parallel tracks in Congress in a race against time and political headwinds to make a once-in-a-generation investment in the nation. Republicans had criticized the Biden administration for linking the bipartisan agreement to the reconciliation measure, which the president later walked back.

Romney, one of the core Republican members of the of the bipartisan pact, called the $3.5 trillion infrastructure measure "stunning, shocking, and an appalling lack of understanding of what tax increases and debt will do to this country," adding that he could not predict how it will impact the agreement.

Louisiana Sen. Bill Cassidy, another core member of the bipartisan group, stressed that the two measures "are not linked."

"There’s no reason why them introducing a bill we knew they were going to introduce the whole time is going to keep somebody from supporting our bill," he stressed.

Senators continued to work Tuesday on the bipartisan measure, attempting to shore up the deal, aiming to meet a Thursday deadline to wrap up the details.

“Rolling, rolling, rolling,” said Sen. Lisa Murkowski, R-Alaska, as she exited a nearly three-hour meeting of the more than 20 senators involved in the effort.

Biden is proposing a multitrillion-dollar package of investments, among the most substantial undertakings of its kind, some say on par with the New Deal in the 1930s. From building back roads and bridges to investing in the everyday services Americans depend on like child care, elder care and broadband, the proposals reach all corners. Underpinning the investments are efforts to combat climate change with energy efficiency and weather resiliency.

The bipartisan effort was thrown into doubt earlier Tuesday when Republicans said it was unlikely it would be ready for a vote next week, as hoped.

But senators exiting the meeting suggested they hadn’t so much resolved the questions over how to pay for the package but moved past them — apparently accepting that some of the proposed revenue streams may not pass muster in formal assessments by the Congressional Budget Office, the lawmakers’ main fiscal scorekeeper.

Sen. Joe Manchin, D-W.Va., said he hoped that CBO’s score, as it is called, would show that “everything’s paid for. If not, we’ll have to make some adjustments.”

Even if the bipartisan group can meet its new deadline for agreement, it’s still a longshot the bill would be ready for a vote next week.

“We hope to get most issues resolved by Thursday, but there will surely be others after that,” said Sen. Mitt Romney, R-Utah.

Paying for the new infrastructure was always going to be a challenge, which is partly why public works investments have lagged over time. Biden has proposed raising taxes on corporations and wealthy Americans earning more than $400,000 a year, which would cover not only the nearly $1 trillion proposal, but also the broader Democratic plan. Republicans reject that approach.

Instead, the bipartisan group of senators racing to salvage its plan strained to come up with other revenue streams to fund the $1 trillion package, which includes about $579 billion in new spending beyond regular expenditures that are funded by gas taxes and other sources.

Senate Minority Leader Mitch McConnell, R-Ky., said he remained hopeful the bipartisan effort could proceed. But his earlier insistence that it “ought to be credibly paid for” signaled the party’s stance.

Ten Republican senators would be needed to back the bipartisan bill, joining with all 50 Democrats to reach the 60-vote threshold typically required to overcome a filibuster and advance it toward passage.