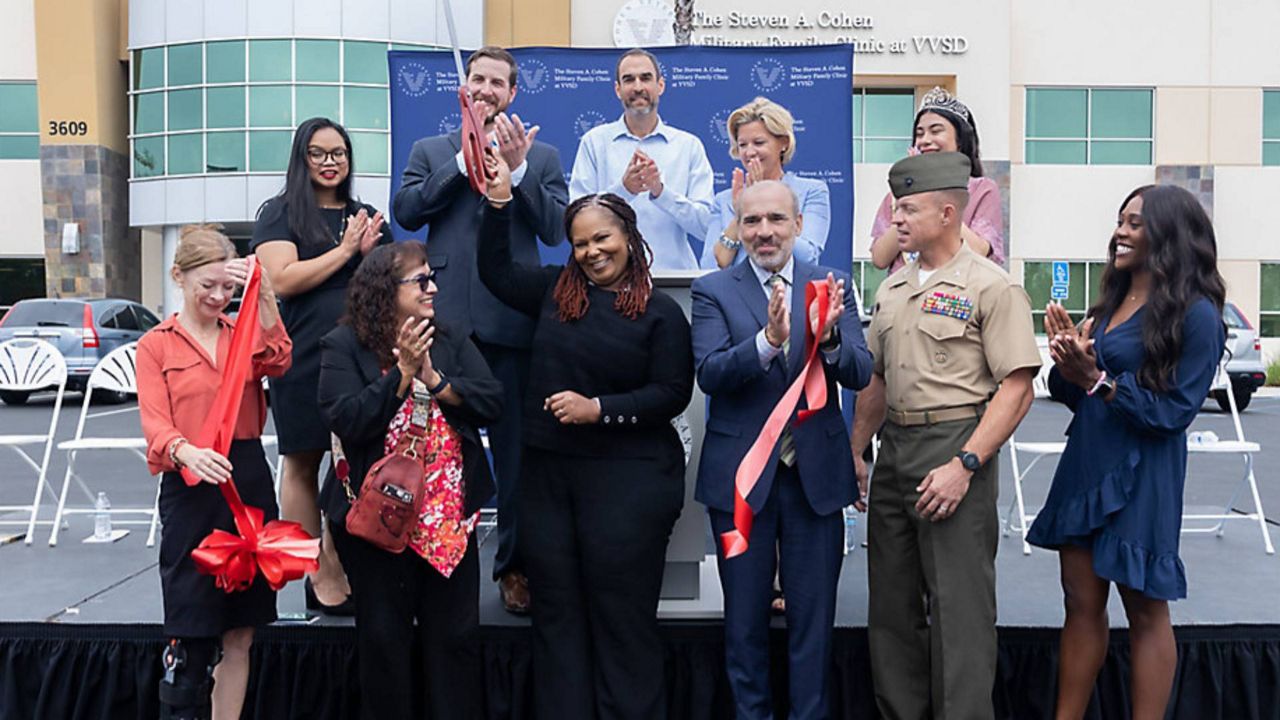 Pictured here is the ribbon cutting at the new Oceanside clinic. (Melissa Jacobs)

New mental health clinic will help veterans and their families

SAN DIEGO — A Medal of Honor recipient helped open a new clinic that will help veterans who are struggling with mental health.

Ryan Pitts is the ninth living recipient of the Medal of Honor for his heroic actions in Afghanistan, defending his teammates in fierce combat against insurgents despite being severely wounded.

“When they read the citation or talk about the battle, I mean, I was there, so I see it again,” he said. “There was valor everywhere that day and the award is really, it’s ours, not just mine.”

The Cohen Veterans Network has found that military members and veterans who served since 9/11 have seen more deployments than any era before them. Pitts says his “invisible wounds” have been the hardest to recover from.

“You know, I’d put everything behind me,” he said. “I’d come home, I’d gone to school, I’d got a job. And then, [the Medal of Honor] resurfaced it all, and I had to talk about it, which changed things. And being open about it brought a lot of those emotions back, and I think, since then, I’ve struggled more with mental health than I did in the period in between.”

Pitts finally asked for help to treat his depression. He is now the spokesman for Cohen Veterans Network, a nonprofit that serves post-9/11 veterans, active-duty and their families through a nationwide system of mental health clinics.

The new clinic in Oceanside helps veterans and their families heal from any stress and mental health pain associated with their service.

“I experienced severe physical wounds that day,” said Pitts in a speech at the grand opening. “I had taken shrapnel to my right leg all the way up and down from my hip. I had actually lost the use of both my legs temporarily. The mental health, the invisible wounds, have been more detrimental to my life than the physical wounds have ever been.”


Akilah Templeton, president of Veterans Village of San Diego, says this new location near the Camp Pendleton Marine Corps Base will help thousands of people get the help they need.

Templeton noted that all the clinics also allow service members and veterans to define their families, meaning there aren’t restrictions that say a couple must be legally married to get help. She believes treating those “invisible wounds” is a duty, never leaving anyone behind.

“And the scars and the trauma that is associated with that, we owe them,” she said. “We really need to embrace them and wrap our arms around them and let them know that we appreciate that sacrifice. Our veterans now have a home of their own. Nobody’s going to turn them away. It’s amazing.”

Pitts says sharing his story has helped him heal, and he hopes other veterans look at him and find the strength to ask for help.

“Pick up the phone and make that call,” he said. “I know it was the hardest thing I ever did, but my only regret is not doing it sooner.”

The network was launched in 2016 with a $275 million gift from Steven A. Cohen, a hedge fund manager and owner of the New York Mets whose son was a Marine deployed to Afghanstan. Cohen plans to open 25 clinics across the country, with Los Angeles to open its first one soon. The Oceanside clinic is the 22nd clinic in the national network.