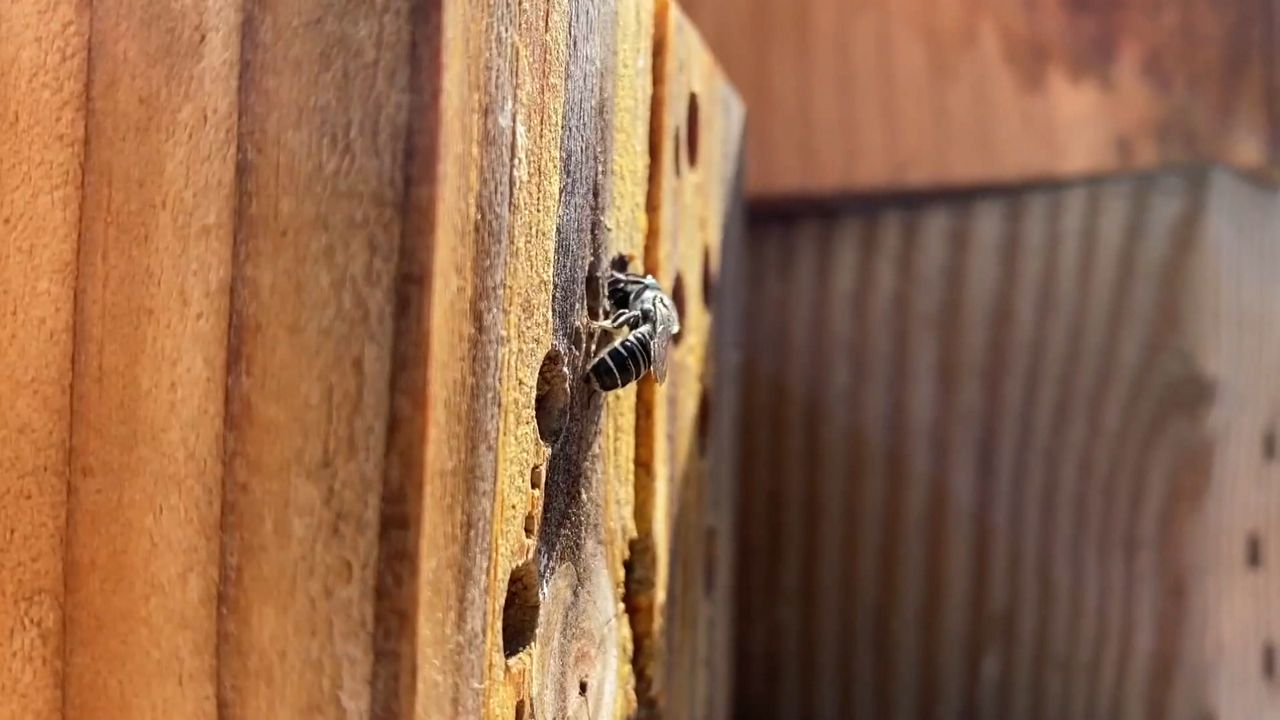 SAN DIEGO — Over the past few decades, researchers have found that habitat loss and pesticide use has caused a steep decline in solitary native bees.

Candace Vanderhoff saw what was happening to the native bee populations around the world and started SoloBee Native Bee Shelter. She is a licensed architect who now builds specialized houses for native bees, mimicking the wood tunnels in nature the bees use as a safe place to nest. Watching them use her houses is one of her greatest joys.

“It’s really calming, you know? Because our lives are so stressful and we want to get into nature,” Vanderhoff said.

Vanderhoff said a solitary female will lay her eggs in the tunnel; after a year, the new bees hatch.

“I’ve had these bees for seven generations now,” she said, motioning to the bees flying around her backyard. “So they keep coming back as long as I provide housing for them.”

Hilary Kearney is a bee expert and owner of Girl Next Door Honey. She frequently goes on bee rescues to relocate hives in unwanted places as an alternative to exterminating the entire hive.

“It feels good to save an animal, instead of exterminating it,” Kearney said. “I try and get [the bees] to choose this [bee box] instead of [that tree]. You have to kind of teach them where they live now.”

Kearney, who was in the process of relocating a honey bee hive from someone’s front yard, said that unlike honey bees, solitary native bees live alone, don’t have a hive to defend and rarely sting.

There are 20,000 different kinds of bees on earth, and 90% live alone as solitary bees. The solitary native bees are super pollinators, pollinating 1 in 3 bites of food.

“Honey bees are what we call generalists. They pollinate lots of different things pretty OK,” Kearney said. “But there’s other bees that are specializing in pollinating certain kinds of plants; like honey bees, for example, can’t pollinate tomatoes.”

Kearney said more than anything else, these “solo bees” need a safe place to nest and thrive. She believes the SoloBee shelters give people an up-close look at their life cycle and will help them appreciate the often over-looked species.

“These solitary species, it’s just one mama bee raising her babies in her little nest and that’s it, you probably won’t even see her,” Kearney said. “I just really hope people start to realize that there’s more than honey bees and really start to value the contributions that these native species are also providing for us.”

Kearney also teaches online and in person classes on backyard beekeeping, and guides bee hive tours to get up close and personal with bees.

Vanderhoff says that so far, she has built 3,174 SoloBee shelters. All of them are made with recycled and reclaimed wood, as well as donated wood from leftover Taylor Guitars.

Her hope is to leave a legacy of love protecting the gentle bees.

“When I die, I want to say that I did something good for the planet and not just take, take, take,” she said. “So I think that’s one of the things that drives me.”

You can order a SoloBee Native Bee Shelter for your home no matter where you live in the world and Vanderhoff will add your house to her bee map that shows where thousands of her bee houses are installed all over the world.