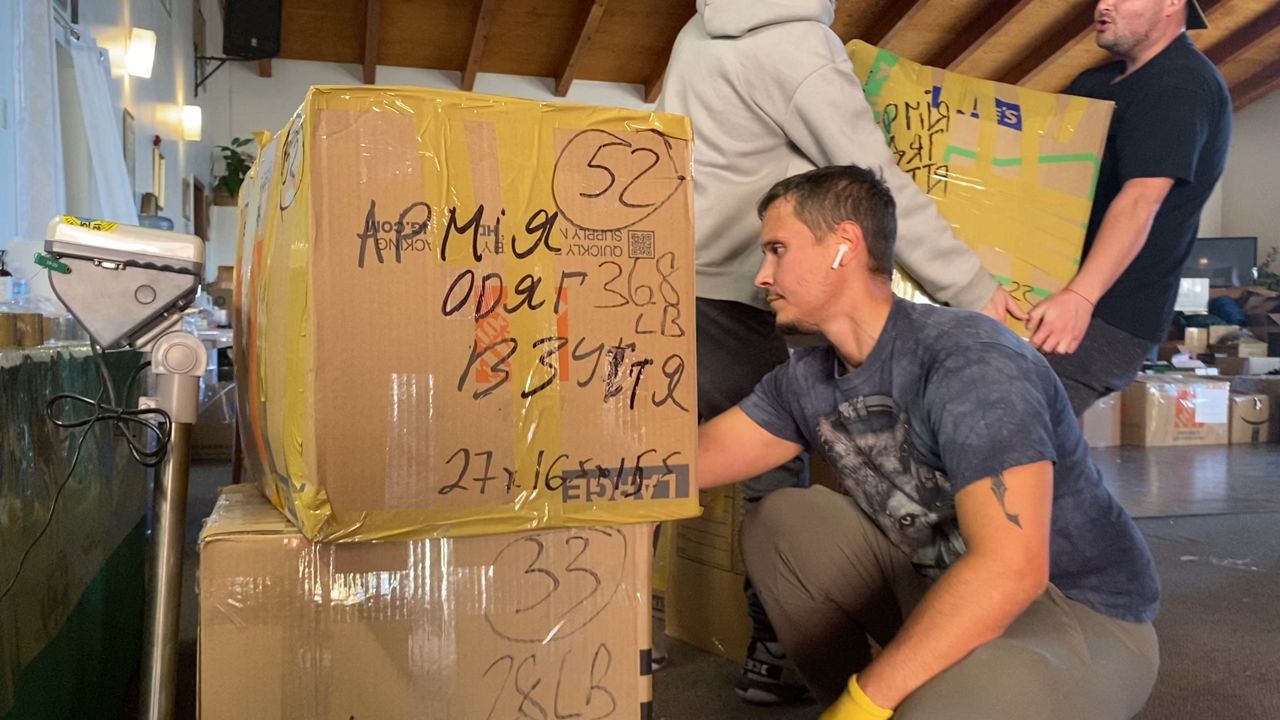 LOS ANGELES — For the past week, Seva has been in constant motion. He’s one of the people coordinating donations that have poured in to different Ukrainian aid groups around Los Angeles. Much of it has ended up at St. Andrew Ukrainian Orthodox Church in Echo Park, where Seva was organizing shipments on a recent Tuesday afternoon.

“I’m feeling overwhelmed to tell you the truth, because it’s fantastic, but on the other hand it’s constantly coming,” he said.

Seva, who asked us to withhold his last name for privacy, grew up in Lviv, Ukraine and still has family in the country. He was working in the music industry, but when the war broke out, he devoted himself to the volunteer efforts.

“I actually quit my job, and this is what I am doing full-time now,” he said.

Delivering the tons of supplies, food and materials to Ukrainians in need is challenging. In order to comply with U.S. aviation law, all shipments must be labeled with the weight, contents and dimensions. Volunteers have been working around the clock to prepare shipments.

"It was madness at the beginning, but it's becoming more systemized and we have our own ways and are splitting into different departments," he said. "People are working on military equipment or medical or weighing."

The Ukrainian Shipping Company, Meest, has been overseeing the logistics of getting the supplies to Ukraine. Victoria Pindrik works in marketing for Meest. She explained their initial plan had been to send shipments to Poland, but they had to shift gears.

“The ideal aircraft situation would be flying into Poland, so that the packages can get to the army and Ukrainian refugees as fast as possible. However, there is just so much aid coming in from all over the world that we have rerouted our packages to go into Germany. We have trucks and logistics on the ground in Germany,” Pindrik said.

The cost of shipping is expensive, so Meest has put out a call for donations. The parent company is also working with Razom for Ukraine.

“It costs a lot more to ship by air, but it’s a lot faster, so we want to get this aid to the refugees and military as soon as possible, so we have reached out. Whatever everyone can give, we’re relying on that,” Pindrik said.

Time is of the essence as the shelling and bombing by Russian troops in Ukraine continue. For Seva, every second counts.

“In a way, I know it might sound weird, but in a way, I don’t deserve to be happy here, until the time I know people there have supplies that are needed, and feel safe. At least with the help of what I’m doing here,” he said.