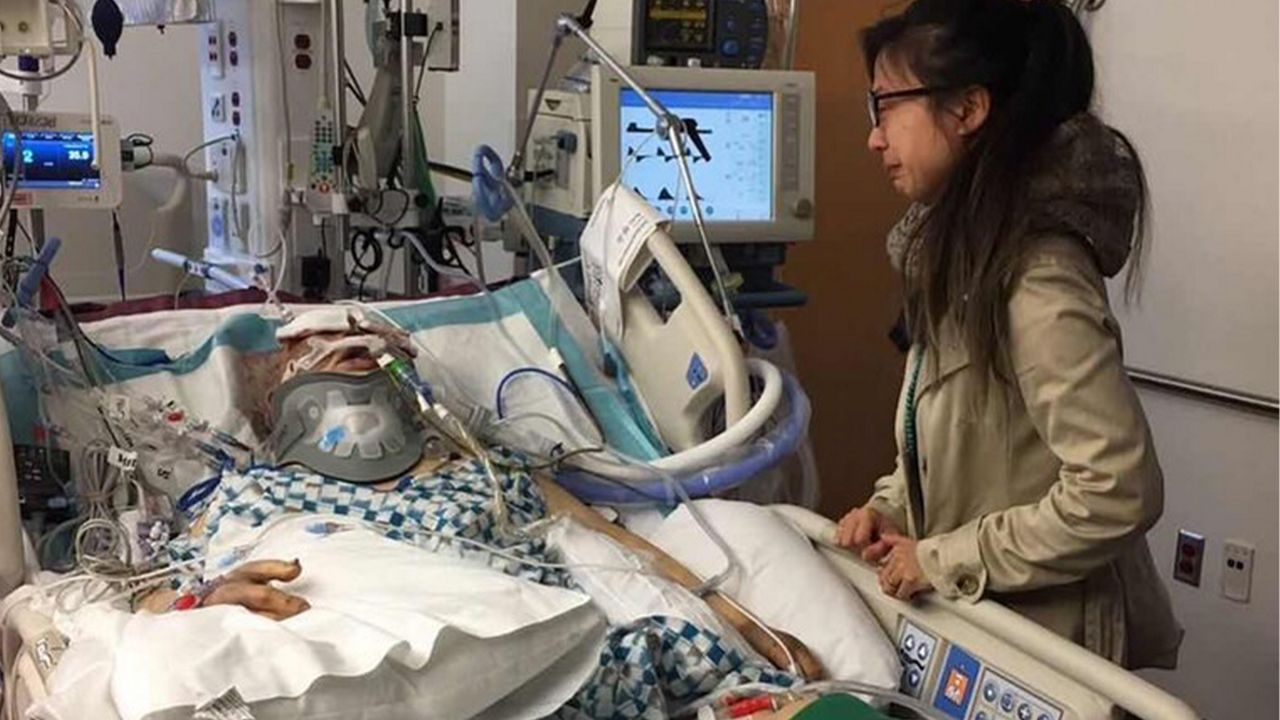 The Other Deadly Virus: What's Behind the Rise in Attacks Against Asian Americans?

EDITOR’S NOTE: This story was co-produced by Cameron Doney and co-edited by Adam Vance.

SAN FRANCISCO — Brutal, sometimes deadly, attacks against Asian Americans have increased across the nation. Amid the pandemic, reports of such attacks have skyrocketed. Some have tied the increase in anti-Asian crimes to the pandemic and hope the attacks will wane as the nation begins to emerge from under the virus, but racism has proven in the past that it cannot be easily suppressed.

In some cases, the attack can bring worse pain than the pandemic itself.

In Visitacion Valley, San Francisco, Yik Oi Huang (黃馬奕愛), 88, was on her usual morning walk around the neighborhood, never imagining the horror that awaited.

“She didn’t return home that morning,” Huang’s granddaughter, Sasanna Yee (余嘉雯) said. “We got this call saying ‘she’s missing.' So, we get to her place. We walk around the park and my dad found her in the sandpit.”

Yee remembered seeing her grandmother unconscious and left her for dead at a local playground.

Yee said her grandmother was dragged around and beaten at the same park she normally goes to exercise every day. Huang was taken to the hospital with a broken spine and shattered face.

“She couldn’t see; she couldn’t breathe. They put a tube through her nose,” Yee said.

Yee’s grandmother stayed in the hospital for a year, showing extraordinary willpower to survive. There were times the family thought Huang would make it. Ultimately, Huang passed away in early 2020.

“Felt angry that this happened to her, that some person would do this to an 88 year old,” Yee said.

Yee tried to recover from that personal trauma, but in recent months, new attacks are awakening her nightmare. In 16 of America’s largest cities, anti-Asian hate crime increased nearly 150% in 2020, according to the Center for the Study of Hate & Extremism at California State University, San Bernardino. Since the pandemic started, attacks against Asians went up in Los Angeles 114% and 833% in New York City.

“I grew up in the Midwest and it was at a time where there were very few Asian Americans so certainly I was called my fair share of names. I hate to admit it but I actually got into a couple of fights because of it,” Yang said. “But I think that’s different than what we are facing today. What we are facing today is an even more vitriolic response, an even more hateful response than what some of us experienced in the past.”

In San Francisco, in February, a defenseless Thai grandfather was slammed into the ground near his house. He died two days later. In Oakland, a 91-year-old man was senselessly shoved into concrete. These unprovoked attacks were followed by thousands of others, according to the group Stop AAPI Hate.

Then came the shooting in Atlanta, Ga., on March 16, that killed eight people, six of them Asian women, exploding the issue onto the national consciousness.

Trump chose not to use the scientific term coronavirus disease 2019, or COVID-19, and decided to use his own verbiage including “Kung Flu,” “the horrible China Virus,” and “Wuhan Virus.”

Chu said it’s that and four years of the former president’s dismissive language against immigrants that fueled the hate. Trump had tweeted July 14, 2019, for progressive lawmakers of color “who originally came from countries” to “go back and help fix the totally broken and crime-infested places from which they came.”

According to a recent poll by USA TODAY/Ipsos, one in four Americans, in recent weeks, have seen someone blame Asian people for the pandemic.

But with many of the recent heinous moments caught on camera, some observers are also concerned about the Black-Asian conflict. The concept has received public attention throughout history like during the 1992 Los Angeles riots, which started after a jury, which included one Asian, chose not to convict four police officers seen on tape beating a Black man by the name of Rodney King.

That same month a Korean store owner shot and killed a 15-year-old Black girl accused of stealing a bottle of orange juice. The owner received probation, a $500 fine, and community service time. Several Korean-owned businesses were severely damaged in the wake of that case.

But Yang said these observations only pit races against each other.

“We’re dealing with communities that are in fear: economic fear, health care fear,” Yang said. “They’re put in situations where they’re almost competing against each other.”

Yang said economic scarcity and labels like “model minorities” for Asians have created racial wedges between communities in America and have distracted from the true problem of systemic racism.

Chu believes white supremacy is at the heart of the problem.

“I believe that at the core of this is indeed white supremacy,” Chu said. “It is something that our country has not dealt effectively with in decades. And also, let me say, that domestic terrorism has clearly not been dealt with effectively. In fact, after 9/11 all the investigations were directed towards Muslims, South Asians and Sikhk Americans and the concept of going after domestic terrorism wasn’t even there!”

Chu said real momentum against anti-Asian racism didn’t come until the Atlanta shooting and said it shouldn’t have to take a massacre for national awareness. The group Stop AAPI Hate tallied about 3,800 incidents reported from March of last year to February of this year where women are attacked over twice as often as men.

The data gathered showed California had the most anti-Asian attacks, at 1,691 reports, while New York had 517 reports. And yet these numbers are likely vastly underreported.

In Washington, D.C., the Asian Liaison Unit meets with business owners and concerned citizens in Chinatown. One Chinese elderly woman told officers how she doesn’t feel safe walking alone, yet she never feels like she can call the police because of historic distrust and language barriers. She said she worries about being attacked, at any time.

The MPD Asian Liaison Unit added three new officers at the start of the pandemic. They’re able to communicate in Korean, Vietnamese, Chinese, and Thai, which many business owners have supported. Though, some critics have protested that the answer isn’t more policing, but rather more resources on socioeconomic issues like affordable housing.

There is no perfect solution to eradicating racism, but there’s new momentum. President Joe Biden is working on several initiatives including getting more funding to AAPI survivors of assault and establishing a COVID-19 Equity Task Force committee to address and end xenophobia against Asian Americans.

Lawmakers vow to prioritize resolution and bills to condemn anti-Asian hate and establish more resources to respond to hate crimes.

For Huang’s granddaughter, Yee, she wants to see more community presence, more security cameras, and personal safety devices, all tactics that she said could have helped her grandmother avoid prolonged torture.

“Sometimes I feel like it was a nightmare, it didn’t happen. However, I am shaken out of that nightmare quite quickly because it’s still happening. All the incidents that are happening now reminds me that ‘oh yes, my grandmother, it happened’,” Yee said.

Yee’s grandmother’s case is still going through trial and has not been labeled as a hate crime by law enforcement. Police report that in January 2019, an 18-year-old man, Keonte Gathron, was arrested. Police believe Gathron beat Huang first and then broke into her home across the street. Yee said whatever the motive, oftentimes older Asian Americans are targeted because they're seen as more vulnerable, especially when they don’t speak the same language.

“It was a tumultuous year. I don't usually see my parents cry. It was very heavy and your heart ached a lot,” Yee said. “Towards the last two weeks of the end of her life, we invited a clown to mime and dance and play guitar, a ukulele actually, and serenaded my grandmother and made her laugh. She succumbed to her injuries, but I'm glad we got to gather as a family and we got to have that little celebration.”

Now Yee fights to be a voice against hate in her community.

“Beyond stopping hate, what we really want is inclusivity, is acceptance, visibility,” Yee said.

She hopes decency and love will serve as protection against all forms of hate. Yee created the group Communities as One and selling Asians Belong t-shirts as a fundraiser, along with the hashtag #AsiansBelong and encourages everyone to use it. Yee also welcomes everyone to come to Visitacion Valley Playground (263 Leland Ave, San Francisco, CA 94134) on April 25 from 9 a.m. -10:30 a.m. to “Move the Chi” by practicing qigong and healing together.

Yee’s grandmother’s name, Yik Oi, translates to Abundant Love and now, Yee is working to rename the park her grandmother was found in to “Yik Oi Huang Peace and Friendship Park” to promote unity and love.

Advocates said anyone can help in this issue. Several options include reaching out to volunteer and help the elderly in your area with exercise or getting groceries. Advocates also encourage family and friends to report crimes, and join bystander intervention training to keep yourselves and others safe in case you witness a hate crimes. You can also educate yourself on Asian American history or join in on the surge in donations to Asian American groups.

The second part of the series: "Racism Doesn’t Belong," which investigates the root causes of the rise in anti-Asian attacks, can be found here.