BURBANK, Calif. — For half a century, Dick and Pam Norton have filled their lawn with the most spectacular and completely unique holiday display. A carousel, rotating swings, and of course, the famous ferris wheel, all designed and built by Dick himself.

The display has long been considered a must-see destination on the holiday light circuit, so when the Norton’s announced on their website that weren’t going to do it this year, people had something to say.

“I got text messages, I got emails, I got death threats! Well, I didn’t get any death threats,” Dick laughed, but added that they did get all kinds of feedback from people, “saying, ‘you know this has been such a crazy year. We really need something normal.’” 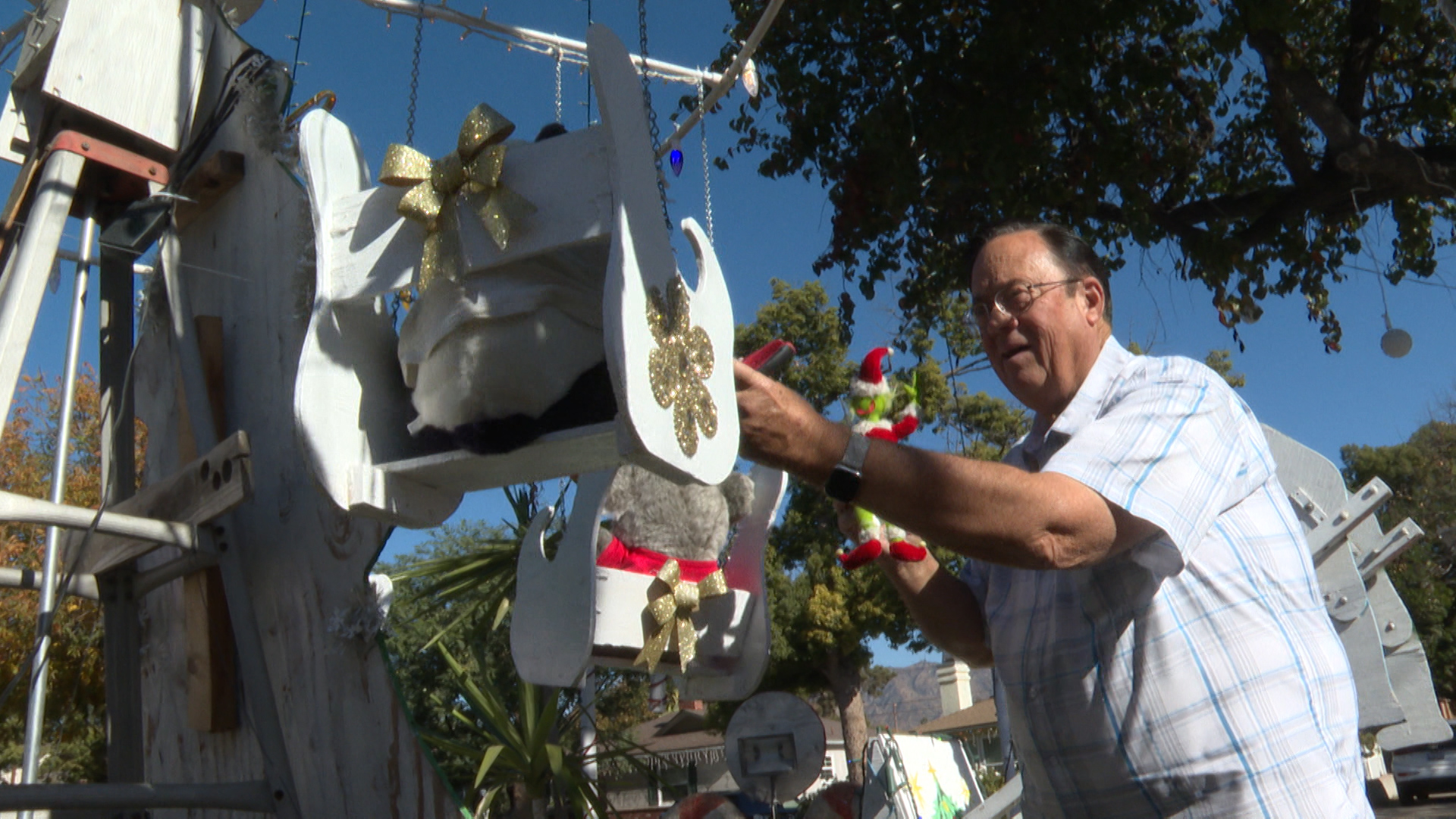 The outcry was enough to persuade the Norton’s to change their minds and with the help of lots of family members and a few friends, their Winter Wonderland was back on for the 51st consecutive year.

Since they started a little later than usual, they warned their fans that this year would likely be a scaled back, more subdued version. But even from halfway down the block you can tell, they didn’t hold anything back.

“We were only going to put a couple of things on the yard,” Pam chuckled, “You get excited doing it! So it’s all going to be up.” 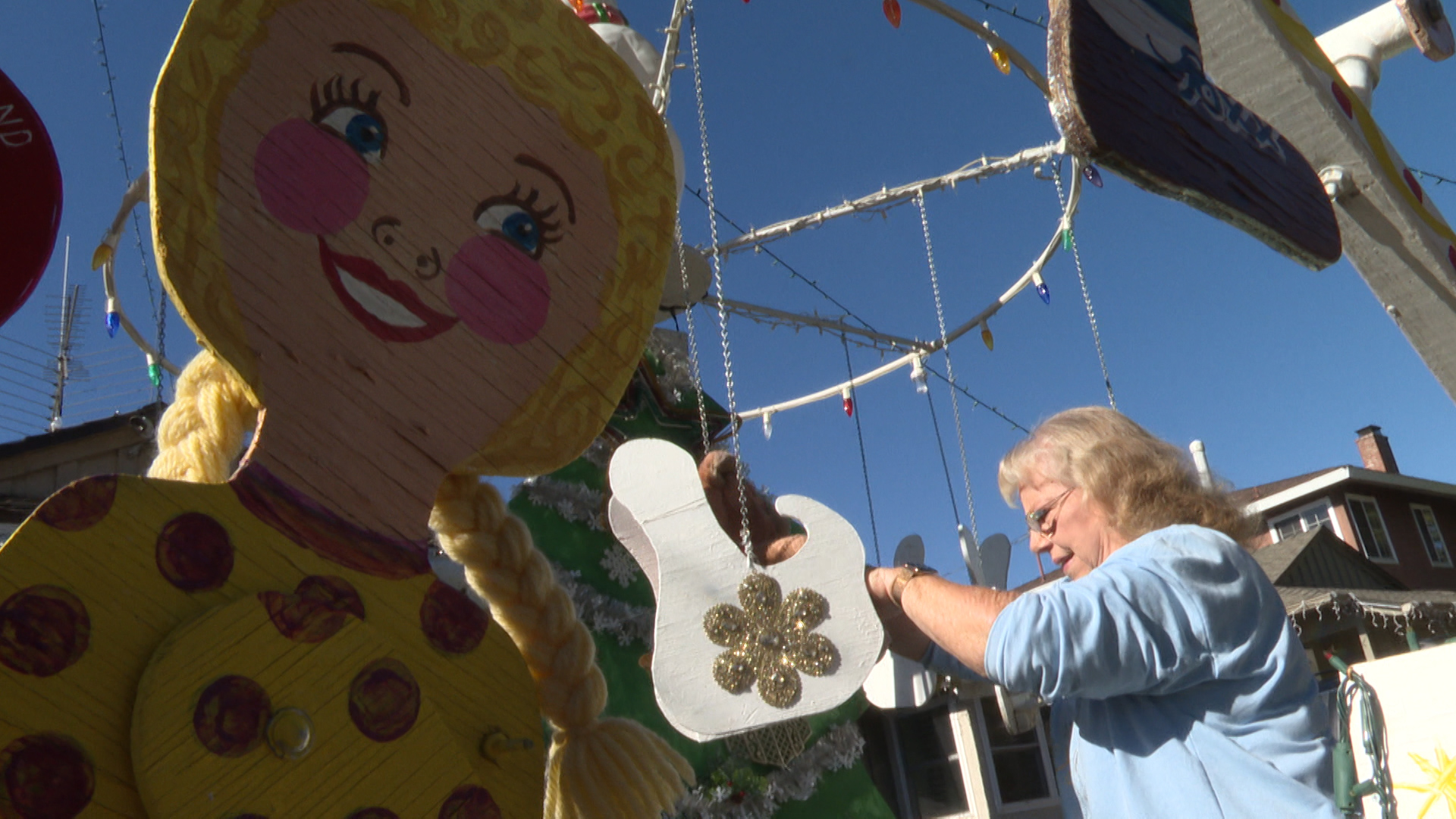 Despite their initial hesitation, once they began working, they knew they’d made the right decision.

“While we’ve been building this, we’ve had so many people just stop by and say, ‘geez, we’re so glad you’re doing this,'” Dick said, a few days before the official opening night.

“Even this morning, they’ve been coming by and thanking us for putting it up this year,” Pam added. 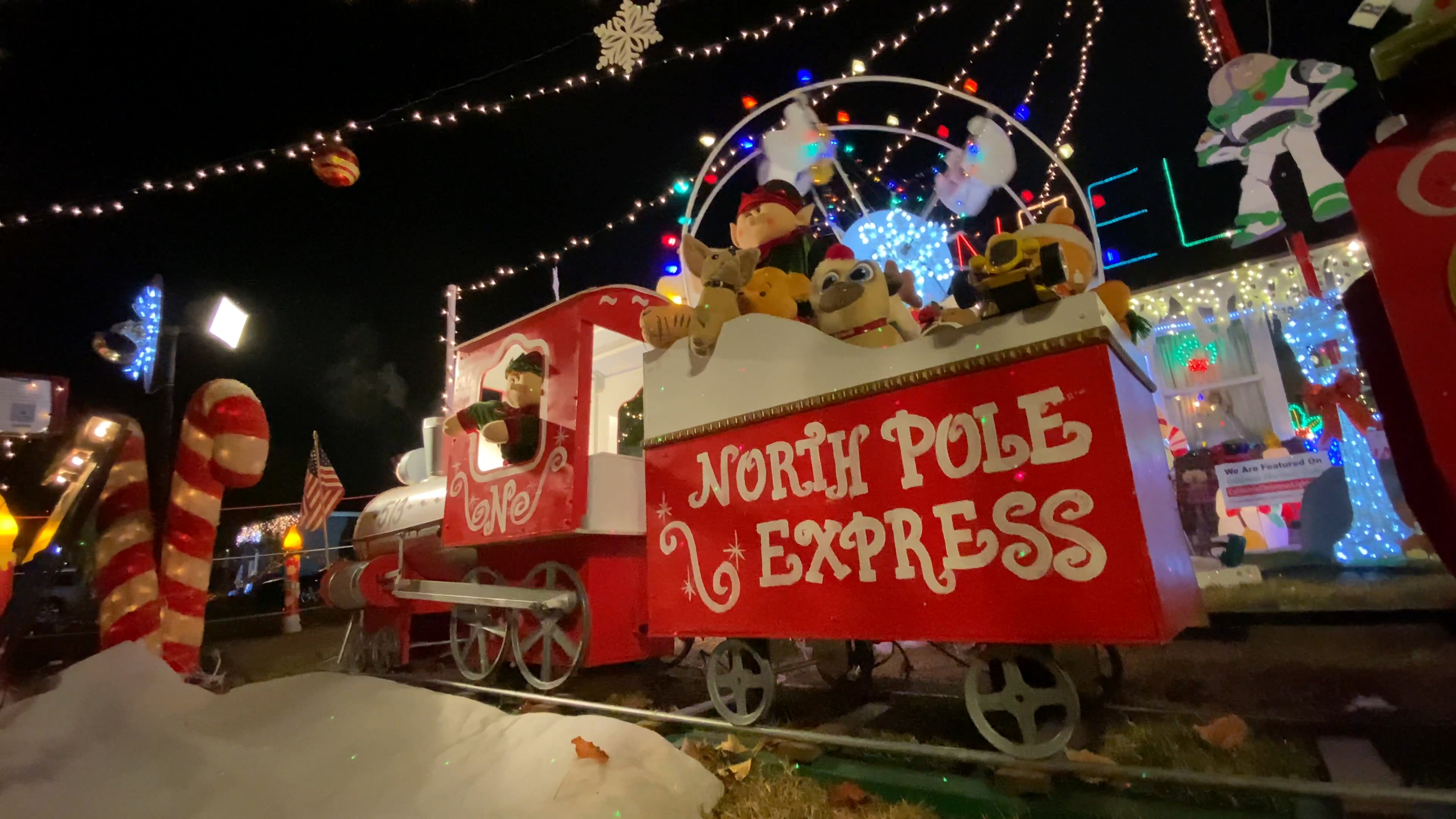 Of course there are a few changes. The Norton’s will be skipping what’s usually their favorite part of the display – mingling with visitors.

“The days are gone when we will be out there shaking hands and meeting people,” the retired tax auditor said. “At our age, we have to be careful of course.”

Instead, they plan to watch from the window or monitor the webcams. Or maybe make an occasional appearance on the lawn where they will be at a safe distance. Even the guestbook will be online this year, through a scannable QR code placed in front of the lawn. 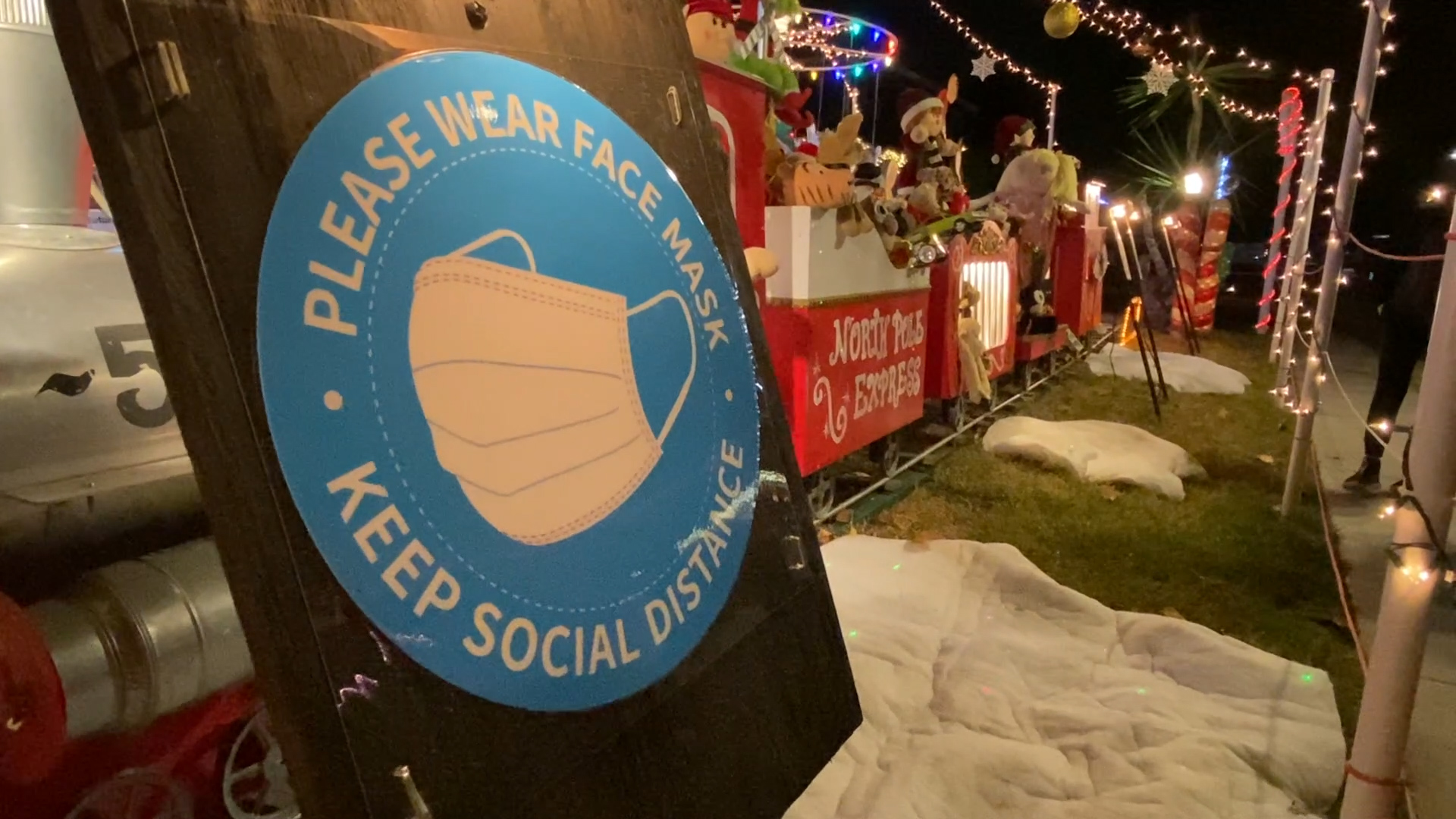 They’ve also added signs to remind the crowd to wear masks and stand 6 feet apart. But that’s the only reference to the pandemic that visitors will see. What they won’t see are masks on any of the dozens of dolls and stuffed animals filling the seats on the rides.

“One of our neighbors offered to make all the masks we wanted,” Pam recalled, “and I looked at my husband and I said, ‘no….let’s make this as normal for the children as possible.’”

“This idea is like, this is what life was like,” Dick said of his carnival-like display. “To put masks on everybody, I don’t think would have the same, you know, uplifting effect.”

And that’s what they’re going for. Uplifting. The Norton’s are in their 70s and say nothing in their lifetime compares to what we’re dealing with today. They want people to leave their lawn feeling a little brighter than when they arrived.

“We’re trying to bring some joy, you know, to people who have had to deal with this crazy pandemic for most of the year,” Dick said.  “It’s just been so depressing and frustrating. If we can make people smile then we’ve accomplished our mission.” 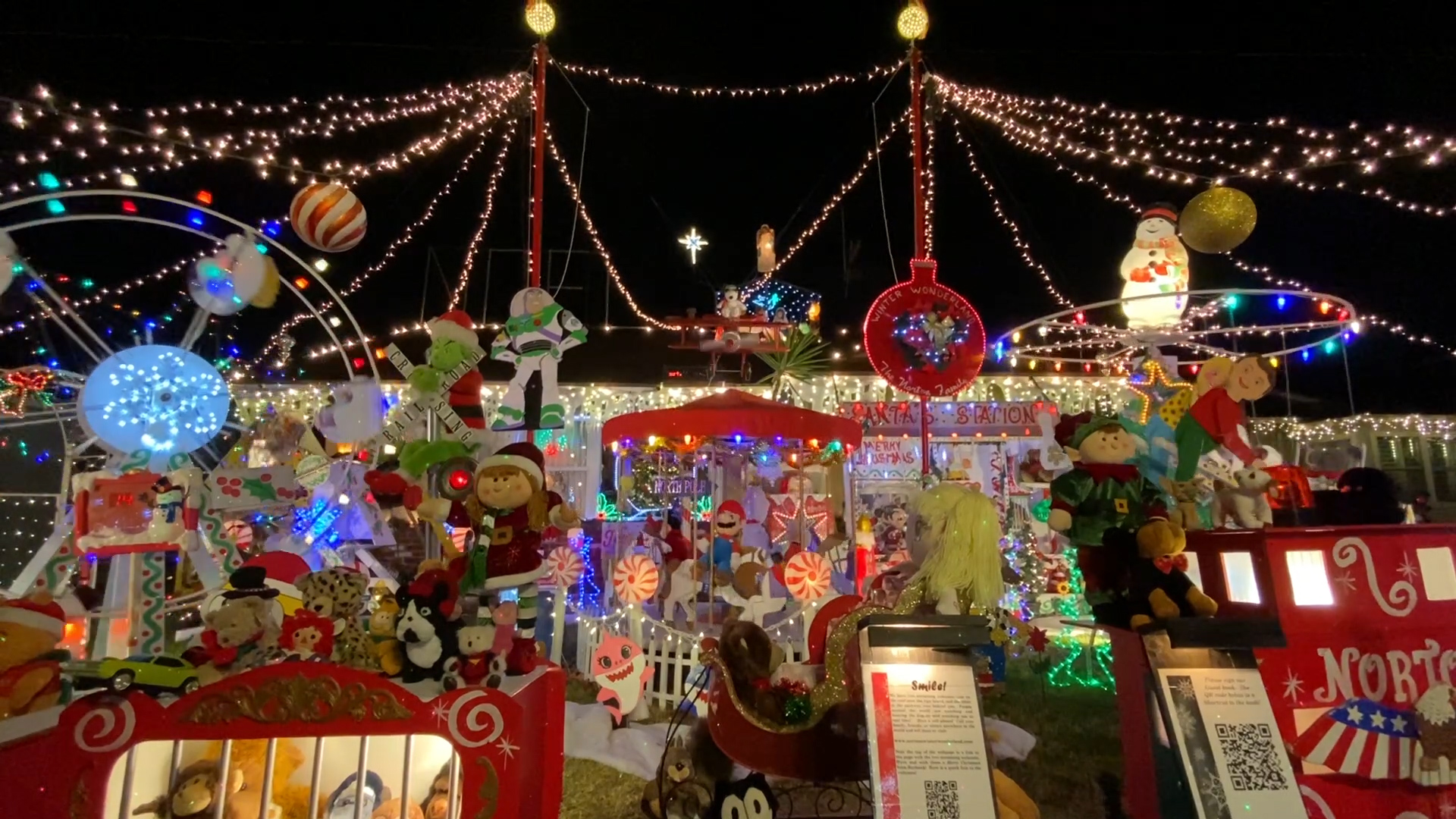