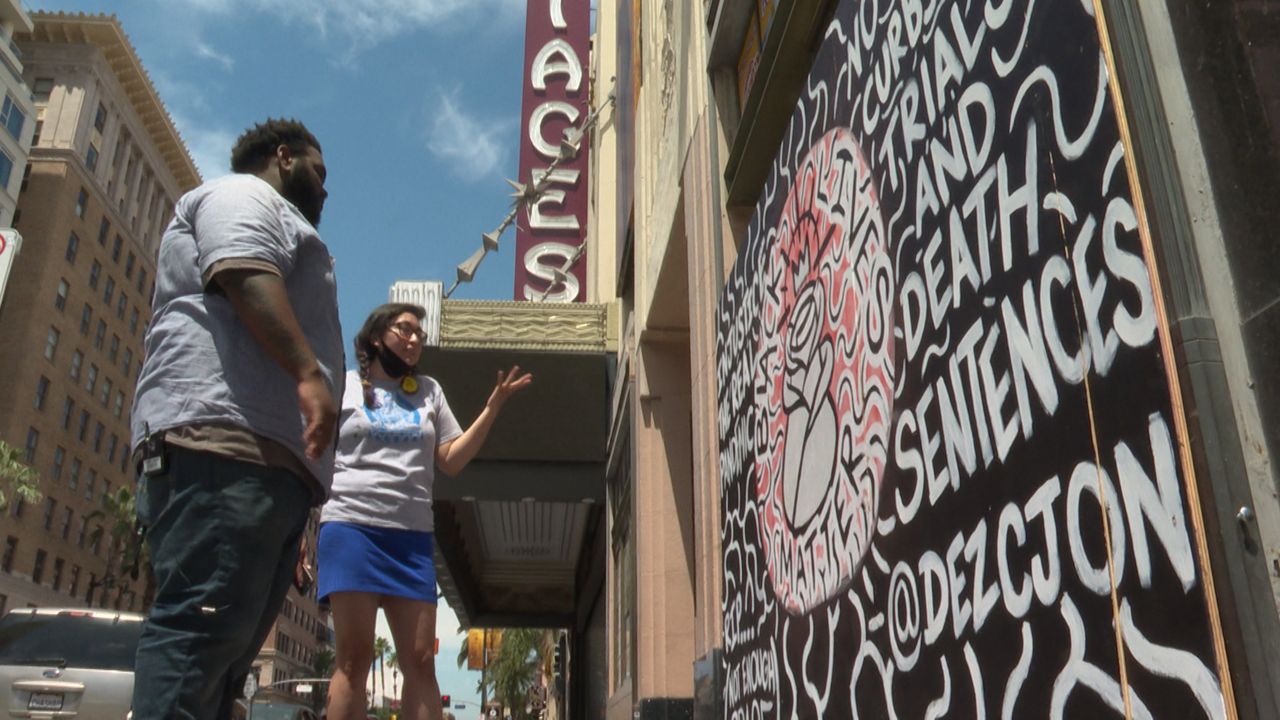 HOLLYWOOD, Calif. – They were told their murals were too political. The art was removed. Then put back again.

But one thing is certain, the murals along Hollywood Boulevard did what art does best — start a conversation.

Teaching artist Marlené Nancy Lopez of the artist collective Crew Native spent all day creating a painting on a wooden panel outside the Hollywood Pantage Theatre on June 7. She says she was completely stunned when, at the end of the day, she was told her painting was too political to remain outside at that location.

“In my piece it says ‘end white silence’ and then that’s exactly what was perpetrated that night," Lopez said. "We were absolutely heartbroken.”

She’s referring to herself and fellow artist, Dezcjon Lathrup, who painted the mural next to hers. His features the words "Black Lives Matter," and was also found to be too political.

“How was it too political when its speaking on the message and hashtag and movement that I thought we was out here in support of?" he said.

The panels are part of a larger project – roughly three dozen murals created on the boarded up businesses around the corner of Hollywood and Vine. Georgia Van Cuylenburg of the non-profit Arts Bridging the Gap says she gave the artists a mission.

“We want art that is unifying, positive, uplifting and nonpolitical," she explained. "We really need to, in my opinion, add some love in, add some positivity, so that we don’t burn out in this time of learning.”

Lopez however doesn’t necessarily agree with that approach. “I think we’re all supposed to be uncomfortable right now so that we can dig deep," she said.

Van Cuylenburg takes responsibility for what happened next.  She says she saw the two pieces and contacted the Pantages, concerned they didn’t match the messaging she’d promised. Lopez's mural was relocated. Lathrup's was turned around while discussions continued.

“It just made me want to paint it bigger and better," he told Lopez.

In the end, the paintings were reinstated in their original position and Van Cuylenburg says she’s learned a lot about taking time to listen.

UPDATE: Our murals have been reinstated and this is what we have to say about it: @hollywoodpantagestheatre as a major player in LA Arts Community your accountability and transparency matters. Reinstating the murals is an amazing expression of allyship and we think it sets a great example to the rest of the LA Arts Community. This is precisely why it cannot happen in silence. It must be accounted for. We continue to call our community and allies to action, because we have yet to see the following: 1. Public direct answer answering: why was this too political? 2. Publicly issued statement detailing the scope of your corrected action plan. Does the attack on racism end with the murals? What more can you do to make sure white silence doesn’t strike again? Please note these statements must be published by you, on your plateforms, to your audience. Do not remain silent. We will publicly count the days with our community until these public statement are made. This is how serious we take your impact on the LA Arts Community. Sincerely, CrewNative

“My knee jerk reaction to wanting to keep everyone happy, I did the one thing we don’t want to do right now which is make them feel unheard," she said.

The Pantages released a statement saying, “We are proud to participate in this amazing project and the hope these murals represent for inspiration and to spark deep listening and conversation.”

But for Lopez, this conversation isn’t over because she hasn’t heard from the Pantages directly. She says Van Cuylenburg has set an example of how to correct a misstep and says the Pantages should follow her lead.

“They need to be an example to all L.A. cultural organizations that it’s OK to make mistakes," she said, "But as long as you are willing to admit that you made a mistake and learn from them, that’s fine.”

A lesson the teaching artist hopes more people will learn.