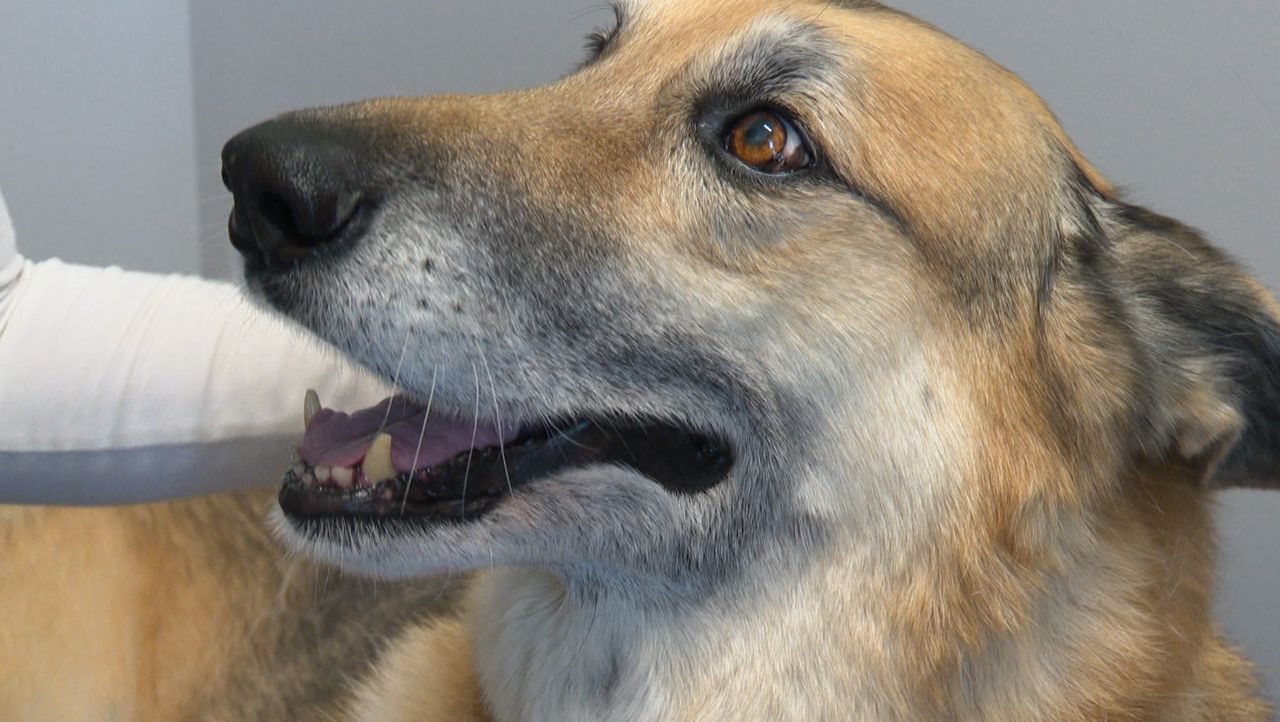 ANAHEIM HILLS, Calif. — Just like people, dogs can start aching and feeling pain as they age. Baxter, a 10-year-old German Shepherd would know.

Cheryl Timmons’ dog has arthritis in his lower back and hind legs. He experiences pain that makes it difficult for him to stand up and walk for long periods of time. In order to treat his arthritis and keep him healthy, Timmons put Baxter on a routine to help relieve his pain which includes regular acupuncture treatments and medication.

“He gets this twice a day. One in the morning and one at night. I just pop it in his food, but it’s something that I want to maintain his health as best as I can and his happiness,” said Timmons.

Baxter’s owner noticed a sign during one of their appointments with Dr. Kathleen Johnson at the Anaheim Hills Pet Clinic which advertised stem cell therapy for dogs.

“Right away I thought, 'Oh dear, what’s this all about?' It sounded intriguing. It sounded like something that can help Baxter, I’m all for it,” said Timmons.

They joined the study to see if stem cells can help reverse his arthritis.

The stem cells come from puppy umbilical cords and are put into an injection by a San Diego-based company called Animal Cell Therapies that has been studying and working for the past 10 years to develop stem cell treatments for pets.

Kathy Petrucci is the company’s CEO. She says her company is on the path to getting the FDA’s approval.

Baxter got his injection a couple months ago and since it was a double blind-study, Timmons and the dog's primary veterinarian, Dr. Johnson, didn’t know if Baxter received a placebo or stem cells.

“I always would watch his back legs when we walk because one of them would usually starts to get limp or his hip would kind of go down. I haven’t seen that at all since he’s gone through this trial,” said Timmons.

Stem cell therapy has long been a controversial topic.

Some experts don’t believe there is enough evidence out there just yet to prove that stem cell therapy works for pets. However, Dr. Johnson, who has been Baxter’s vet for several years, says she’s seen a change in him.

“We can give him non-steroidal anti-inflammatories, but really it’s not a fix. It’s just masking the symptoms,” said Dr. Johnson.

The doctor says she has regularly given Baxter acupuncture and cool laser treatments and put him on non-steroidal prescriptions, but Baxter still showed signs of slowing down. Since the double-blind study was completed, Dr. Johnson says Baxter has gotten better.

“He’s got pep in his steps back,” said Dr. Johnson.

Turns out, Baxter didn’t receive a placebo. He actually got the stem cells.

While his vet and his mom Timmons believe that Baxter is happier and healthier now since the therapy, they’re also excited to be a part of this study that could potentially one day make stem cell therapy more accessible for aging pets like Baxter.

For more information about the study, please visit: dogstemcellstudy.com