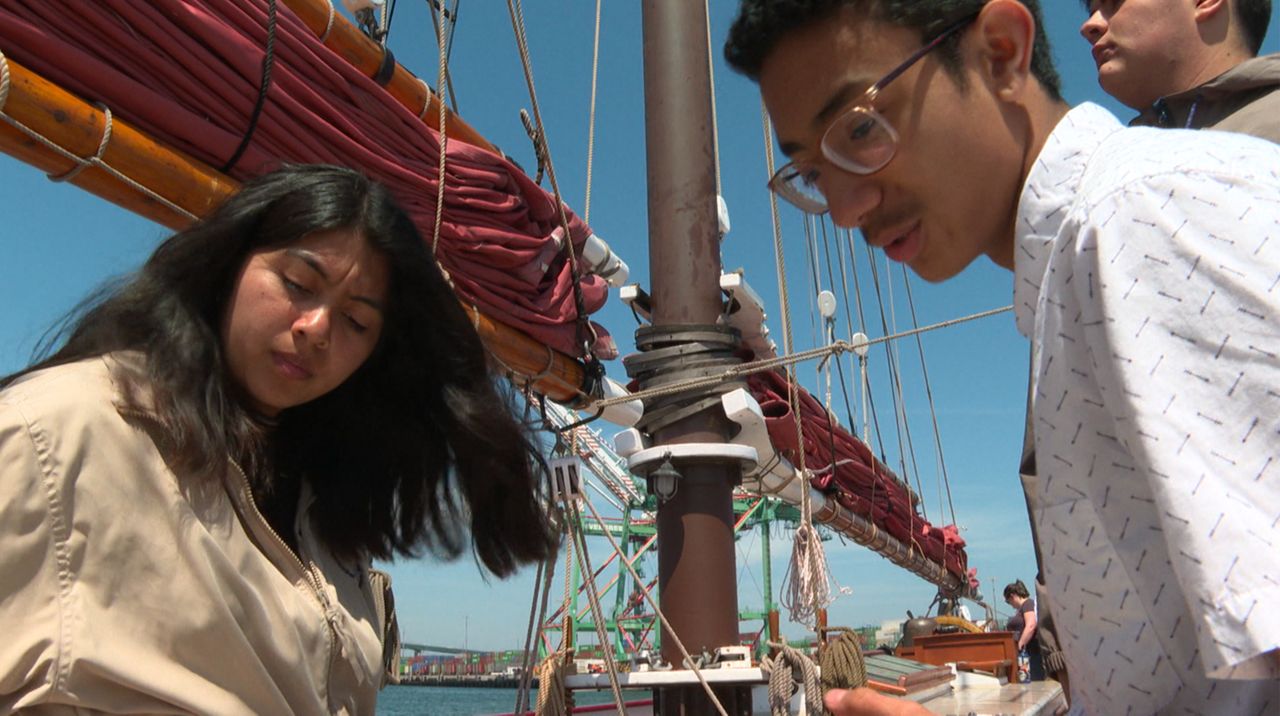 SAN PEDRO, Calif. -- One of the keys to keeping young adults engaged in the fight for environmental health is giving them hands-on experience with the science involved.

Since 2006, the Marine Biology Environmental Club at Ánimo High School in Inglewood has been mentoring students in the field of environmental research, education and public outreach.

Mark Friedman, one of the students’ mentors, has been heading up this environmental club which, since 2017, has been taking students on field trips to San Pedro harbor, collecting ocean plastic pollution data as part of the Maritime Institute Youth Crew.

“There is a real dearth of blacks and Latinos in science, so this program was developed along with a Marine Biology Club, which I’ve run for 14 years, [consisting of] students ninth through 12th grade,” explained Friedman from aboard The American Pride tall ship in San Pedro.

The group’s primary sample collection tool is called a “manta trawl” which collects any debris and organisms in a sock-like net as it is pulled alongside the ship.

“We are coming from low income families, so a lot of them don't actually know what happens in their very own oceans because they don't have education," explained student researcher José Velasquez. "One of the things that we're also trying to do is educate our community so that we can educate people that there's a micro plastic crisis.”

Part of the students’ mission takes them into classrooms and to public events to give presentations on ocean plastics and their negative effects on marine life and, in turn, on human beings.

“We have put so much plastic out there that it cannot be taken back, no matter how many beach cleanups or ocean cleanups you do,” said Johanna Cervantes, another of the student researchers. “Our purpose is to try and educate the public that if we stop now we can probably slow down climate change.”

After collecting ocean water samples, the students sift and sort the material and make note of the quantity and type of plastics and other non-organic materials they observe. Their findings are posted online and can be accessed by others studying ocean plastics.

Besides the research experience, now the students’ passion and commitment is paying off in other ways as this summer they will be traveling to Cuba and Japan to take part in international conferences on ocean plastic pollution where they’ll get to interact with other students and researchers from over 60 different countries.

“I'm pretty excited about that,” said Velasquez. “Mostly because I get to meet a lot more new people that are a lot more educated about [ocean plastics] than me.”

For these students, their work requires a lot of free time and energy, but they all feel the experience they're gaining and the message they're sending is well worth the trouble.

For information on the students’ GoFundMe campaign, visit: www.gofundme.com/intl-ocean-plastics-pollution-youth-initiative