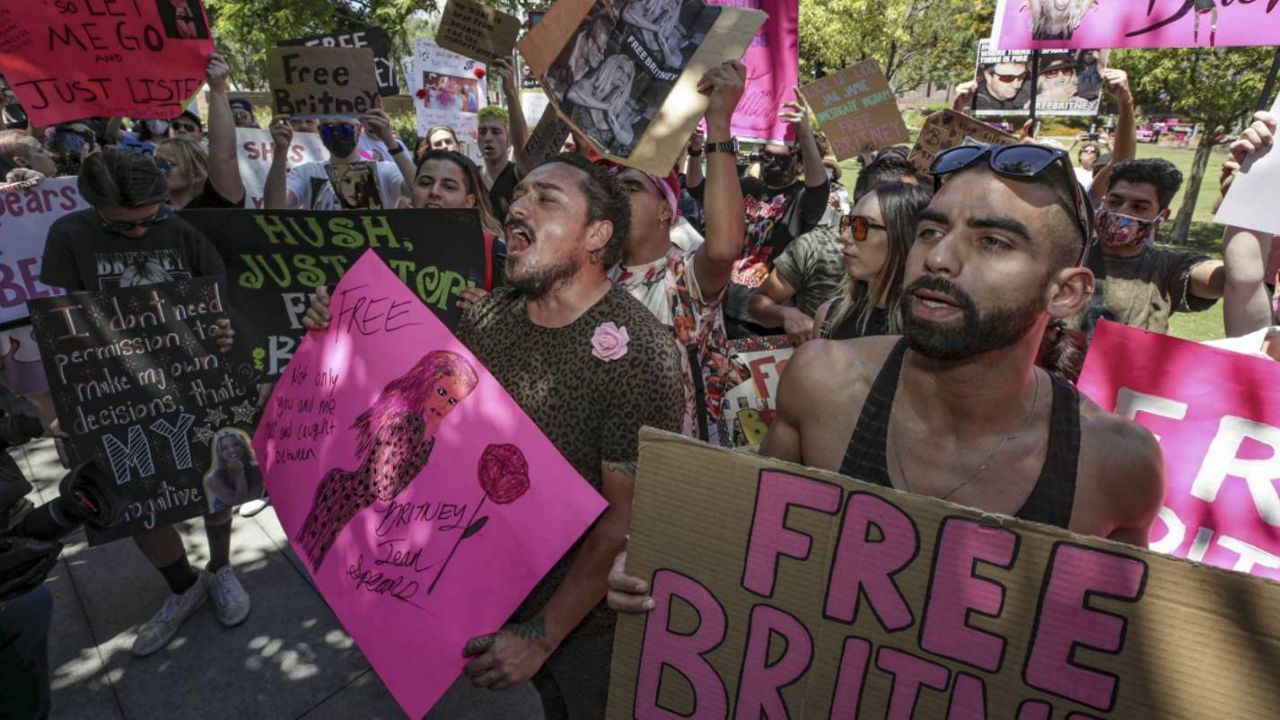 The history behind the 'Free Britney' movement

At 16, Britney Spears catapulted into fame and became one of pop music's most iconic stars. As the "Mickey Mouse Club" alum gained worldwide success, her troubles and alleged substance abuse resulted in a conservatorship with her father, Jamie Spears, at the helm.

Fans concerned about Britney's well-being and whether her dad and team were acting in her best interest sparked a global movement to help the pop star.


In an interview for "LA Times Today," staff writer Yvonne Villarreal joined host Lisa McRee to share the inside story of the Free Britney movement.

The Free Britney movement is a fan-led movement made up of supporters from all over the world.

"The movement's mission is to free Britney from the conservatorship that she's been under for 13 years. They are really on a mission that is a human rights mission, and they are going above and beyond. They show up to court hearings. They go over legal documents. They host Instagram lives to explain developments in her case. And it's all to bring awareness to the discrepancies surrounding her conservatorship," Villareal said.

With the rise of TikTok, various creators have made videos addressing Britney's conservatorship. Still, one of the first videos that went viral was the "Leave Britney Alone!" video from blogger Cara Cunningham in 2007.

"For many of the supporters in the movement, their concerns began once the conservatorship was put in place in 2008. She was going through an intense period of public scrutiny over her seemingly erratic behavior. At that time, there was the "Leave Britney Alone!" video from Cara Cunningham, which took off, but people ridiculed that video. They saw it as something funny and something to mock. There has been growing concern about what is going on with her case. And, at the time, a court order gave her father control over her estate and other aspects of her life, but it was supposed to be temporary. Now we are 13 years in, and fans have been questioning it, particularly because Britney has released three albums in the years since. She also has held a successful Las Vegas residency, and she has made numerous television appearances. At one time, she was a judge on "The X Factor," and for many, it wasn't the behavior of someone who was incapacitated," Villareal added.

Villareal adds that the movement made a resurgence in 2019 because of a podcast called "Britney's Gram," hosted by Tess Barker and Barbara Gray.

"The podcast was initially dedicated to humorously dissecting her Instagram postings. But they received a voicemail from someone who claimed to be a former paralegal or a lawyer who worked on Britney's case. The anonymous tipster alleged that Spears entered the mental health facility against her will and that her father pulled the plug on the residency because she was not taking her medication as prescribed. It motivated a more robust call for action by Britney's fans. But we saw things intensify with the New York Times documentary "Framing Britney Spears" that amplified Britney's case in the "Free Britney" movement in a fundamental way. Even my mom was asking me questions about Britney's case. One of the supporters I spoke with said it legitimized the movement, which had long been mocked or ridiculed as foolish or a waste of time."

There also was a time when Britney's father called the movement a joke, but the case has been getting a lot of attention. Many supporters are wondering if Britney is aware of what they are doing.

"Many of them attended the June court hearing, and they didn't expect to hear from Britney, but when they did, she said she wanted her testimony to be made public. She wanted people to hear what was going on. They were bracing themselves for what she was going to say, and it confirmed a lot of their worst suspicions, just like that podcast voicemail had. She talked about a lot of the restrictions that have been placed on her life. She talked about how she had been drugged and forced to work and prevented from removing her birth control. She talked about how she couldn't marry or have a child," Villareal said.

After Britney's testimony, Villareal said many things started to shift.

"Britney's lawyer filed to have her father removed. We have heard from Britney's father about how he is willing to end the conservatorship, but he gave a vague timeline. Now, he recently filed something to push the courts to put an end to this, but "Free Britney" advocates have long pointed out the fight for her rights goes beyond his removal. So, we're still in a holding pattern of what happens."

"And if this can happen to Britney, a powerful woman in the public eye, imagine an older person or people who have no support network?" #FreeBritney https://t.co/XBrvwChXXt