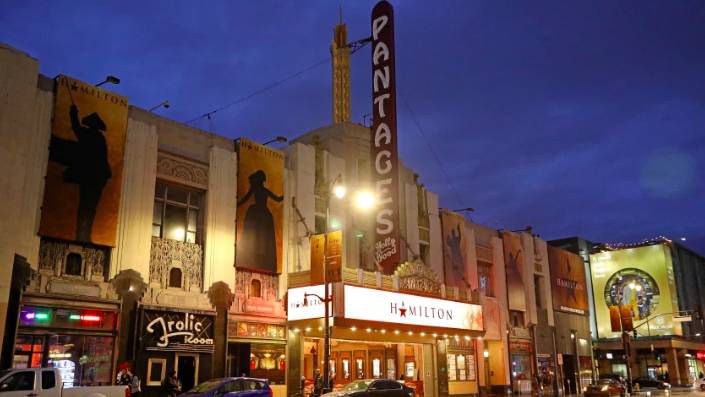 After 17-months dark — live theater is finally opening up, and the Pantages Theater in Hollywood is hosting “Hamilton” as its first post-pandemic show.

In an interview for L.A. Times Today, Sabrina Sloan — who plays Anjelica Schyler - joined host Lisa McRee to talk about being back on stage.


Sloan said navigating the pandemic as a parent and professional was a big challenge.

"I, like many people, was Zoom schooling the kids at home and figuring out a way to keep them active but apart from other people. There was a lot of online performing here and there once we figured that out and some social justice activism that we were doing. But, we found a way to find joy in the midst of not being able to be on stage,” said Sloan.

From the beginning of the pandemic, actor Lin-Manuel Miranda helped raise money for people who lost their job in the arts industry, and he even opened up a Broadway vaccination site. Sloan said she is proud to be part of a team that has been so committed to fighting the pandemic while helping others.

"It's wonderful for us coming back because we have people like Lin who are championing the cause of getting the vaccine out there to everyone so that we can get back to working and bringing joy to people on the stage. But we're also very well taken care of. They are made sure that we didn't come back to work until it was safe and every single one of us is vaccinated. We are all tested three times a week. The audience here must be vaccinated and wear masks. So we feel very safe, and we don't have kind of that lingering fear in the back of our minds as we go in to go to work, and we're able to perform at our very best. So I'm extremely grateful for that," she said.

Sloan said there was not a dry eye in the room during the opening night at the Pantages Theater.

"That first performance was everything we dreamed of. The moment when everyone screams for Hamilton, there's a moment when we come out in the timeline, and the entire cast is standing at the front of the stage, and people just started applauding and screaming; it's not a time where they usually do that. And it was hard for any of us to keep going because it was overwhelming that that moment, knowing that we made it here, we made it back. To have such a supportive audience that has also been away for so long, we just all wanted to be part of that moment. So it was like having this one collective heartbeat and just extraordinary happiness. I'm thrilled to do it over and over again as many times as we can," she said.

When it comes to preparing for a performance, it requires a lot of training and conditioning.

"A lot of us do things to maintain, but there's nothing that can compare with doing this particular show, which is very difficult, eight times a week. The company has been wonderful in that they brought us in with the idea of mental health being first. We're all coming from very different places out of this pandemic, and they want to make sure we go at our own pace and knowing that we'll get to where we were before when we get there. But I think we're definitely on the sort of LeBron James mentality of like the six-hour preparation that it takes. You got to get up and steam, and then you've got to stretch, and you've got to make sure the muscles are loose, and then you've got to do all the breathing. A lot goes into it; it's not just roll out of bed and put on a costume and start belting. So like Mondays, I've been kind of taking the day off for full vocal rest, which is challenging to do with two kids, but it's necessary. And, we have to think about longevity, and we all want to be doing this for many years to come," said Sloan.