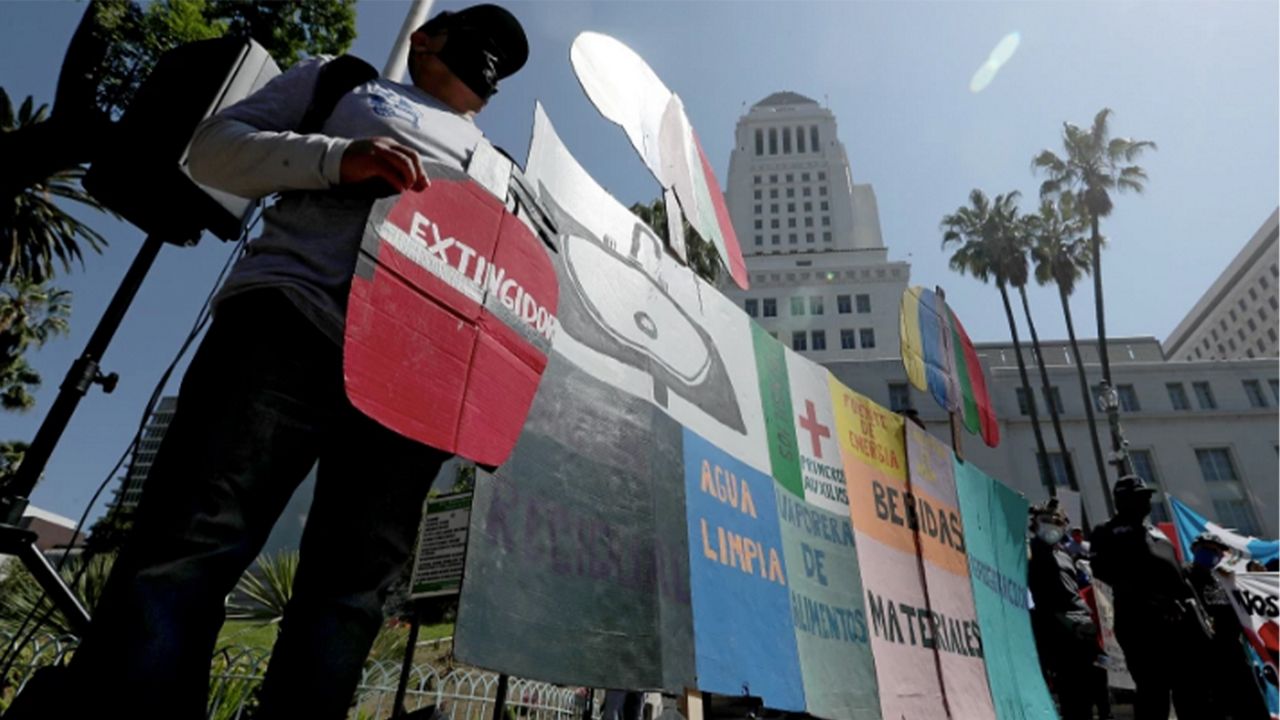 You've seen them all over Southern California: Street vendors are selling hot dogs, tacos and other types of foods.

Many are operating those carts illegally, despite a state law called the safe sidewalk vending act.

Staff writer Emily Alpert Reyes writes that the problem is vendors are required to follow complex rules and have expensive carts that many can't afford. In an interview for "LA Times Today," Reyes joined host Lisa McRee with more.

Reyes says only a small fraction of the estimated thousands of vendors who sell food, and fewer than 200 have received Los Angeles City permits.

"The reason is that to get a city of LA permit to legally be a vendor if you're selling food, you also have to get a county health permit," she said. "And getting a county health permit means that your cart has to be approved by the county Department of Public Health. And that means it has to comply with this whole list of requirements, some basic state codes, some rooted in county guidelines that can be really difficult, especially for people who are selling hot food."

One of the rules that has frustrated vendors has to do with California requiring many "food facilities" where food is cooked to have a sink with at least three compartments.

"All this depends on exactly what you're serving and how, but some vendors may need to have four different sinks, one for handwashing and three for ware-washing," Reyes said. "So that means washing utensils and pots and things. You may need to have as much as 20 gallons of water on-site, so one tank has five gallons for handwashing and another 15 gallons for ware-washing. And there can also be requirements for a system to suppress fires, an overhead system that can be somewhat challenging on an open cart."

L.A.’s sidewalk vendors have been hitting an obstacle: Legalizing their carts https://t.co/3Yy4fe6HMz

A report by the UCLA School of Law and other vendor advocates found that Los Angeles County had added requirements that include a minimum amount of room and storage and refrigeration that strains the dimensions of a sidewalk cart.

"The county's specific square footage requirements can be pretty challenging," Reyes added. "I believe, for a hot dog cart, in particular, they calculated that it would be at least nine cubic feet of dry storage and 12 cubic feet of refrigeration. And they calculate that that would be room for 5,000 hot dogs, which is more than a typical hot dog vendor needs to have on hand in any shift."

According to a survey by vendor advocates, vendors say the mobile facilities that meet the rules for hot food are too extensive for the sidewalk and too costly for entrepreneurs that make an average of $15,000 annually.

"They contend that these rules were designed for food trucks, for little catering trailers," said Reyes. "And that the stuff that's on the market reflects that there aren't people really manufacturing things that are small enough to sit on a sidewalk that is affordable enough for your typical sidewalk vendor and that actually meet all these requirements."

Despite the hurdles, Reyes says there are a couple of efforts aimed at helping street vendors.

"One of the efforts was undertaken by an engineer named Richard Gomez, who's gotten a blueprint approved for a cart that he's really excited about. That took a lot of going back and forth with the public health department and was not a very easy process. He's hoping to keep working and create more carts that get approval for other kinds of food. There's also a county-funded pilot program that's been trying to design a cart that would work for tamales, elotes, and I believe, one other thing."

"And they're still in the process of going kind of back and forth over, you know, what are the exact requirements, what flexibility is there?" Reyes continued. "The reason that state officials cited for the sink requirements, for instance, is that you want a separate space to wash, sanitize and rinse your utensils. The question has been, are there other ways to meet that objective that doesn't require so much space? Could you have disposable utensils? Could you have utensils that you use once and then set aside? So figuring out what are the ways that we get to the objectives of these requirements and not sacrifice public health while making it more feasible for people to do this business legally.”