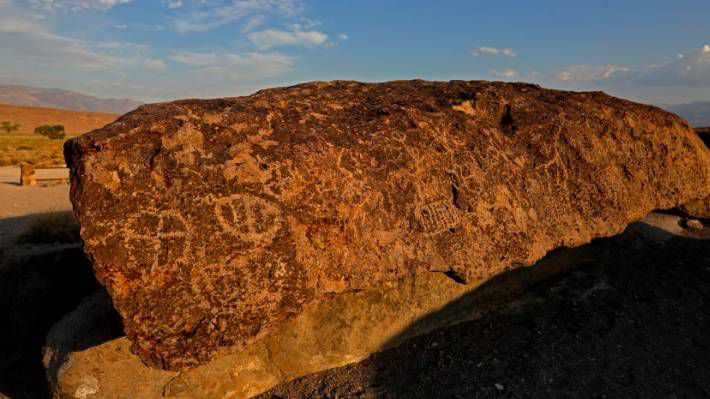 Caltech is one of the most prestigious schools in the country, known for its science and engineering programs.


Archeologists know the site as the Volcanic Tablelands, a landscape of pink-hued cliffs and terraces shaped by wind, rain and earthquakes.

"This is a truly otherworldly place of outcroppings and massive boulders where it apparently was a crossroads for prehistoric clans passing through over the last 8,000 years," said Sahagun. "And while passing through, they paused to record their experiences. And today, it is a sacred place for the descendants of those very people. They are the Paiute-Shoshone tribes of the eastern Sierra. And to them, this is a living, sacred place."

Native Americans, archeologists and federal land managers have long complained that unlawful removal and destruction of artifacts and sacred sites destroy priceless cultural connections, along with scientific data that allow a better understanding of the earliest inhabitants of North America.

"Since the 1950s, there has been an exciting new field of study known as paleomagnetism," Sahagun added. "Paleomagnetism involves taking rock samples to determine shifts in the magnetic field of the Earth. Magnetic fields shield the Earth from cosmic rays, and the notion is that when there were certain shifts, the cosmic rays were stronger or weaker. And as a result, they triggered shifts in the evolution of species and entire ecosystems and even ancient peoples. And so these people go out, and they try and in turn destruct these shifts, and then they try and connect the dots with evolutionary changes. The trouble is, you can't do that on public lands where there are petroglyphs without a permit. These people did not have permits."

In June, Caltech agreed to pay $25,465 to the Department of the Interior to cover the costs of repairing damage from the drilling.

"In the most recent case, Caltech professor Joseph Kirschvink, who, along with some students, was seen drilling at least 29 holes into this federally protected archeological site known as Fish Slough, which is about 10 miles north of Bishop, Sahagun said. "But the last number that we see that the federal investigators took note of says 35. So he was investigated for 29 holes that they can find. But apparently, there were several more holes."

"This petroglyph site is so remarkable and so easy to get to that it is a magnet for looters who go there and scour the grounds in search of, you know, not just petroglyphs, but arrowheads and any relic that they could sell in illegal trade," said Sahagun. "And therefore, some people take it upon themselves to keep a hawk-eye out for these kinds of folks. And it did happen. One of those stewards of the petroglyphs saw Kirschvink and his students in the act, and he reported it immediately to the Bureau of Land Management."

Sahagun explained that Caltech is not the only school that has violated a historic site in the name of research.

"I've come to learn all over the world, but in this particular area, this is a region stretching all the way into Nevada. And so now we know that the University of Texas at Dallas was busted for 29 holes in a federally protected archeological site 25 miles to the East. And Cal State Northridge in our own backyard here was busted for 41 holes drilled into a petroglyph site 25 miles south of Fish Slough.”

Caltech stated they “deeply” regret an incident four years ago where a professor drilled holes into a sacred Native American site. It is the latest incident of unauthorized drilling at petroglyph sites: