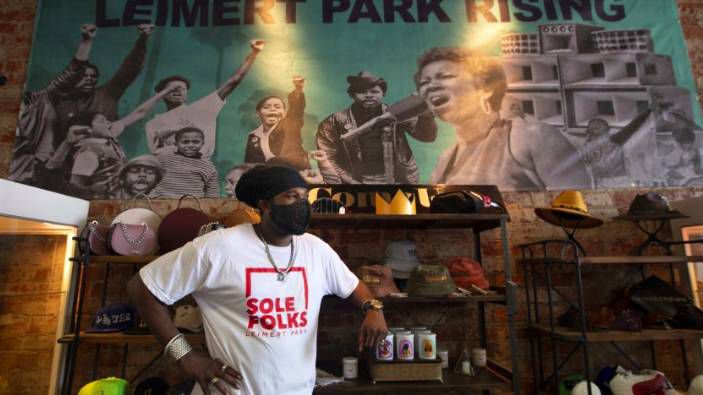 The original idea for Sole Folks was to open a small sneaker boutique in the heart of Leimert Park.

Now, less than a year later, and in a much larger space, it's evolved into a retail co-op managed by the non-profit, Black-owned and operated Community Land Trust, which focuses on giving the next generation of Black entrepreneurs a leg up.

Over 40 unique businesses are happening with different business owners in the co-op.

"We have apparel, shoes, jewelry, candles, home goods, and a juice bar. We also have a podcast studio upstairs; we have a conference space where people can have meetings, and we have a design studio in the back," said the co-founder of Sole Folks, Nika King.

The plan is for Sole Folks to become a hub for Black designers.

"We want it to be a place where they know they will have the resources and tools to bring their ideas to life. I used to have a clothing store in the early 90s in West L.A. I noticed for my years of incarceration — I did 14 years of imprisonment — I would have many young people come in and out of my cell. When I would talk to these young people, they would tell me that they did not have any role models or any real examples of how to start a business. I told them that when I get home, I would dedicate the rest of my life empowering young people with the information they need so they can start building their businesses," said the co-founder of Sole Folks, Akil West.

One of the Sole Folks designers provides one-of-a-kind items that they think will resonate with the community.

"I think of a design and bring it to Sole Folks as an exclusive drop rather than releasing it online to see how it works here. I like to bring it to the community first to see how they respond to it," said the owner of Gilded Grotto, Cara Butler.

The main goal of Sole Folks, outside of the retail space, is the incubator program.

"We have a design lab in the back, and we have tools to cut and sow. But if we do not have things, some places around the neighborhood have things. Our goal is for the students to have their own business, product, and ultimately it would be sold here in Sole Folks," said co-founder of Sole Folks, Taz Arnold.

To get the latest on upcoming events and programs, visit solefolks.com.

“I vowed when I got home to create a resource space for young adults who are artists and wanting to be entrepreneurs or have that get up and go [mentality],” said West.https://t.co/L99y81Kh8N