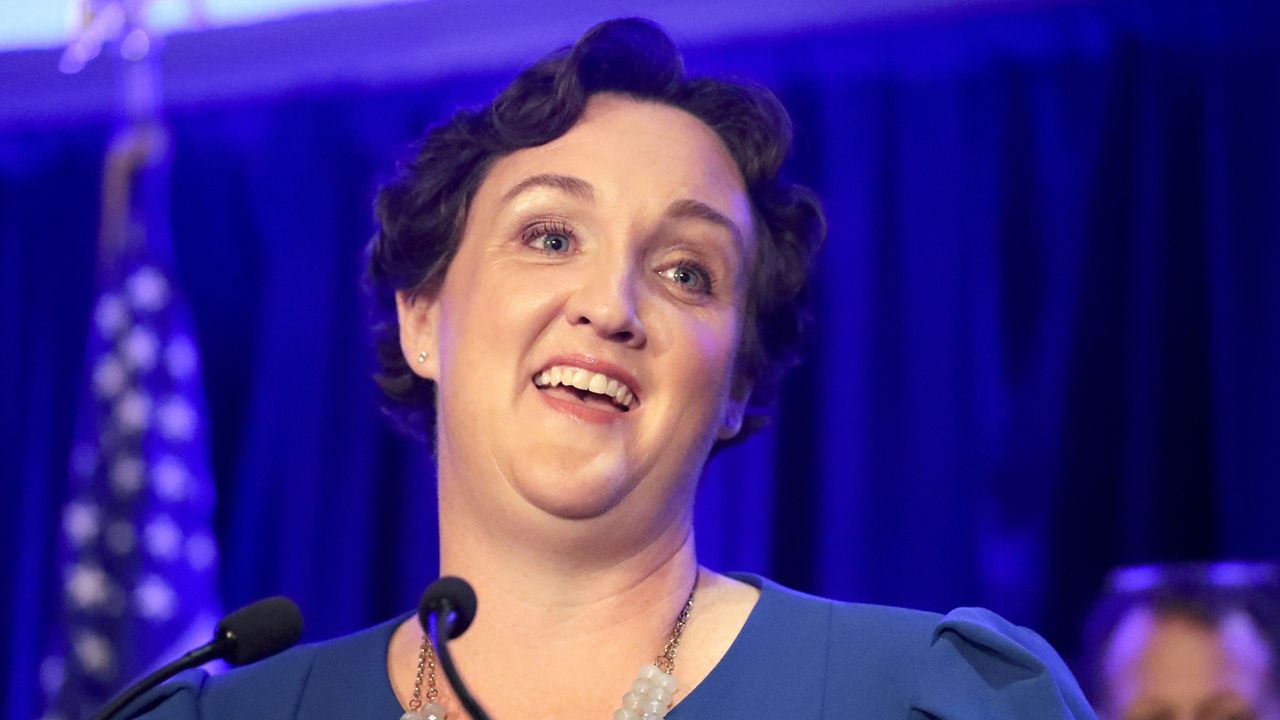 In this Nov. 6, 2018, file photo, Katie Porter speaks during an election night event in Tustin, Calif. Porter won the election for California's 45th district. California’s tarnished Republican Party is hoping to rebound in a handful of U.S. House races but its candidates must overcome widespread loathing for President Donald Trump and voting trends that have made the nation’s most populous state an exemplar of Democratic strength. (AP Photo/Chris Carlson, File)

On this special episode of Inside the Issues, we take a look at where the election results are so far and get reactions from scholars and community leaders across the Southland.

"For a lawsuit, you need to find a violation of a law," Jessica Levinson, director of Loyola Law School's Public Service Institute, tells Inside the Issues. "I mean, you mentioned this idea of people aren't being given access. We haven't seen evidence of that and merely saying, 'I don't like the result' or 'This isn't fair,' there's actually no statutory basis for that. You can't go into court and say, 'I'm just not happy,' you have to find the legal provision and evidence to support that."

Whether or not these cases may make their way into the Supreme Court and if a conservative-led SCOTUS could indicate a projected outcome, Levinson said it's hard to predict.

"Merely saying, 'I don't like the result' or 'This isn't fair,' there's actually no statutory basis for that. You can't go into court and say, 'I'm just not happy.'"@LevinsonJessica of @LoyolaLawSchool joined @alexcoheninla to discuss the wave of election-related litigation. pic.twitter.com/X7ZPgMMcmV

"I'm going to make what is going to sound, potentially, like a naive comment first, which is that I think people view the Supreme Court and they say, 'President Trump has had three appointments, there's a 6-to-3 conservative majority, and so that means if anything comes before the Supreme Court, then he will win 6-to-3,'" she said. "And here's where it's potentially going to sound naive: Being a conservative legal thinker does not always map onto a Republican political win, and part of the reason is because of what you said, judges and justices do have lifetime appointments and the idea is that they don't have to think, 'How is this going to play in the next election?,' 'Will this be popular?', 'Will I lose my job if I make this decision a certain way?' And so, it's not, if this comes to the Supreme Court, it's not a done deal because we don't know the law at issue, we don't know the facts at issue, and we don't know how it could break along, again, legal throughlines, not political ideology lines."

Currently, Democratic Presidential candidate Joe Biden has won the most votes ever cast for a president at a total of 72,639,742 as of this writing, breaking former President Barack Obama's record in 2008 of nearly 69,500,000. When it comes to whether or not polls leading up to the election could have indicated this, Raphael J. Sonenshein, executive director of the Pat Brown Institute for Public Affairs at California State University, Los Angeles, tells Inside the Issues the polls were a "roller coaster" that couldn't have necessarily predicted this outcome.

"I think that it's heading toward a Joe Biden victory, narrowly, but it'll probably be a solid victory with the next few states coming in. A lot of people thought it was going to be a landslide for Joe Biden, but we all forgot that there are always two options: a landslide or a dead heat that one candidate would win narrowly, and it turned out to be the second. The result is fascinating, impactful," he explained. "The poor performance of Democrats in Congressional elections is, basically, overtaken by the incredible difficulty of dislodging an incumbent president with a strong base of support in their own party. That is, if it does hold up, in political terms, that is an astounding achievement."

.@RSonensheinPBI of @PBI said we need to take polls with a grain of salt since no one knows how many people will actually vote.

"They're really not very good at prediction. What they're great at is a really great poll allows you to see the dynamics of the community at play." pic.twitter.com/B6AjssSR5r

Polls should always be taken with a grain of salt, he said, as they aren't a great prediction of an outcome.

"What they're great at is a really great poll that allows you to see the dynamics of the community at play," he said. "People aren't going to tell you whether they're going to vote or not. They all say they're going to vote, whether they do or not. But don't throw the baby out with the bathwater. Polling still has value for us to learn things, but I will tell you, we are so addicted to polls that if you and I added our opinions together and called someone and said we polled each other, we could get news coverage. It's just absurd."

Despite Biden's lead, many are surprised at the increase in turnout for Trump. Jody Armour, law professor at USC, looked at the data behind election results in 2016 in his book, N*gga Theory: Race, Language, Unequal Justice, and the Law, and said the increase in support can be explained by "white identity politics."

"I think people were really surprised that one of the most unpopular presidents in recent history, he wasn't an especially popular president, who had in many ways, viewed in many circles, as having botched his response to one of the greatest health crisis confronting this country in 100 years and for the election, in spite of all of that, to be this close is reason for, I think in many Democratic circles, for critical self-reflection, rather than gloating about squeaking something like this out under these kinds of circumstances," he said. "And so, I think it says a lot about the power of white identity politics. I think the appeal of Donald Trump's brand of ethnonationalist demagoguery."

"For the election... to be this close is reason for, I think in many Democratic circles, for critical self-reflection rather than gloating."@USCGouldLaw Professor @NiggaTheory joined @alexcoheninla to explain "the power of white identity politics" in this presidential race. pic.twitter.com/j1jZ4hd4js

"To really understand it, you have to go beyond economic anxiety and look at the concern about status anxiety, about white identity politics. A lot of people in 2016, for example, thought that. It's the white working class that accounted for Donald Trump," continued Armour. "Actually, one-third of Donald Trump's support came from white families making under $50,000a year, another third came from white families making between $50,000 and $100,000 and another third from white families making over $100,000. So, it's really better-off whites who supported Donald Trump and got him into office in 2016 - not the working-class whites and understanding that dimension of white identity politics is important to understanding politics in general in America today."

While the country awaits the final tally of the presidential election, other races are being called, including that of State Rep. Katie Porter (D-Irvine), who won reelection this year, beating Republican Greg Raths for the seat. As of this writing, the incumbent was up by about 10 percentage points, with 84% of precincts reporting.

"I think one of the things that we need to celebrate is our democracy. I'm proud of our country, and democracy is not always easy. It takes patience. It takes hard work," she tells Inside the Issues. "It makes demands of each of us both to fight for what we believe in but also to accept that others may disagree, but I think that's something that we should celebrate."

"Democracy is not always easy. It takes patience. It takes hard work. It makes demands of each of us."@RepKatiePorter has been declared the winner of California's 45th Congressional District. She said Democracy is worth celebrating, and she tried to bring joy to her campaign. pic.twitter.com/9j5UJFir7k

"I wanted this campaign to be one that was joyful, that was respectful to the wide variety of people that I represent in Central Orange County — Republicans, Independents, Democrats — people that may be divided on the issues, but who hopefully can agree that our democracy and our democratic process is something we should celebrate," she continued.

Californians also voted on 12 propositions, including the passing of Proposition 22, which exempts companies like Uber and Lyft from a state law that would have required them to classify workers as employees.

Most of the state overwhelmingly supported the measure, but those in San Francisco country, did not, says Ben Christopher, California politics and elections reporter for CalMatters.

"This became, not necessarily a partisan issue, but certainly became and ideological issue where you had organized labor and a lot of progressive activists who are very much opposed to Prop 22 and so San Francisco being San Francisco, it's a very progressive place, and so I'm sure just ideologically it's a good fit for the 'No' campaign as well. Unfortunately, for the 'No' campaign, it wasn't an ideological fit with the rest of the state, so it seemed."

"These gig companies -- @Uber, @lyft, @DoorDash, @Instacart -- [made] a historically large bet on Prop. 22, and it seems fair to say that it paid off pretty handsomely." pic.twitter.com/XCcz5GUkpv

"These gig companies — Uber, Lyft, DoorDash, Instacart — [made] a historically large bet on Prop. 22, and it seems fair to say that it paid off pretty handsomely," said Christopher. "There was legislation, as you say, AB5, that would have forced them to treat their drivers as employees, there were court orders, there was the State Attorney General and other state regulators, that were really trying to force them to comply and so as this last resort, they went to the voter and spent $200 million dollars, more money than has ever been spent on any state ballot measure ever, I think in the country, and a large majority of voters took their side and gave them the exemption to the law."