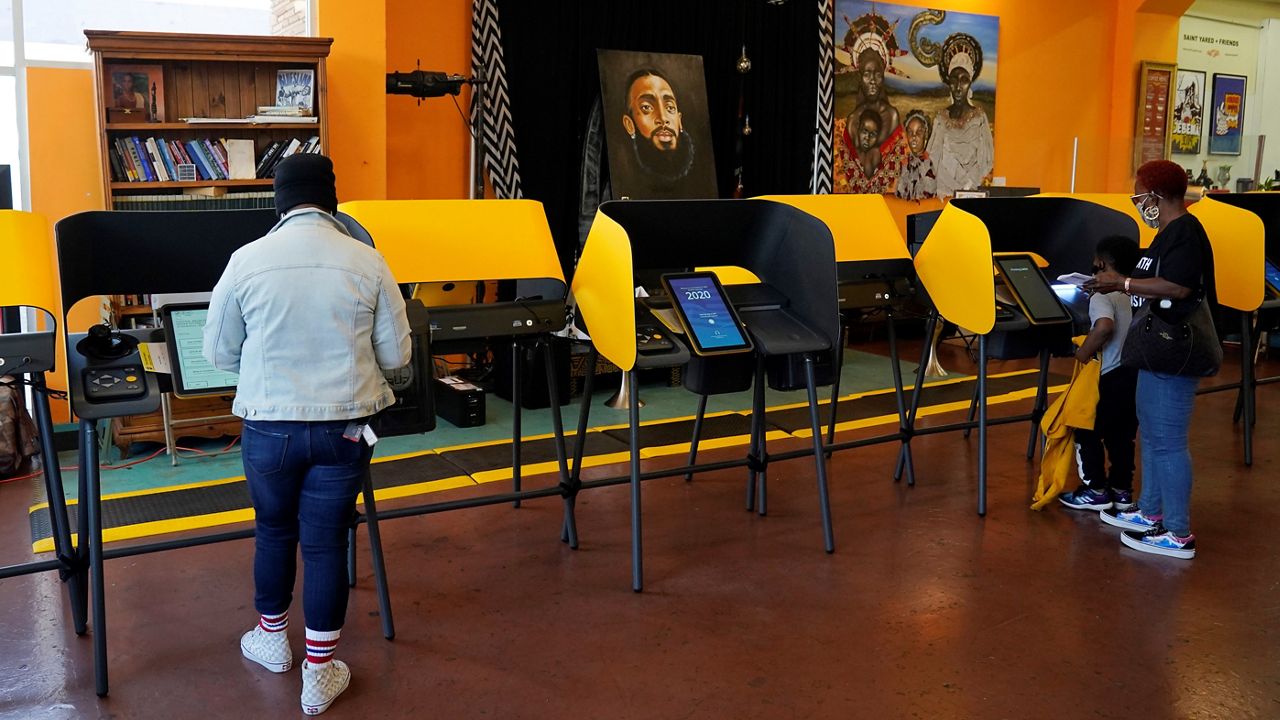 Voters work on their ballots at a polling station at the Hot and Cool Cafe, Tuesday, Nov. 3, 2020, in the Leimert Park section of Los Angeles. (AP Photo/Chris Pizzello)​

EDITOR'S NOTE: Multimedia journalist Zarina Khairzada talks to a woman helping other women, who were formerly incarcerated, register to vote now that Proposition 17 is projected to pass. Click the arrow above to watch the video.

LOS ANGELES — As California's Election Day results rolled in, and statewide counts began to show projections that Proposition 17 hadn't just passed, but won with an overwhelming margin, a man named Lee, watching from a socially-distanced party with his coworkers, almost began vibrating.

Chills and tingles began to course throughout his body.

It began when he realized that he would finally have his voice heard through his vote for the first time in decades.

With the projected passage of Proposition 17, an amendment to the California State Constitution, Lee is one of more than 50,000 Californians who are on parole whose voting rights will be restored. As of Nov. 4, Proposition 17 passed by more than 2.1 million votes, with 59% of voters in favor.

Before Proposition 17, the California Constitution barred parolees from registering to vote, though their voting rights were automatically restored upon completion of their parole.

Lee, who requested his last name not be used in this story, was convicted of murder and robbery at 17 years of age. After serving 25 years inside — first in juvenile detention, then county jail and state prison — Lee was released in 2019 and remains on parole.

After his release, he joined Initiate Justice, an organization that works to end mass incarceration through activism by the people most affected by it — people who are currently in or recently released from the California prison system.

Initiate Justice says that its initiatives are "100% led by its members" — and Proposition 17, they said, was born from Rahsaan Thomas. Thomas is a published author, a reporter, and the host of a popular podcast, Ear Hustle, about life inside San Quentin State Prison, where he's currently being held.

Initiate Justice Executive Director Taina Vargas-Edmond said Thomas called her in 2017, telling her that restoring incarcerated people's voting rights is key to activating their political power. A 2017 signature effort for a measure to restore rights for both those in prison and the recently-released stalled. But in 2018, State Assemblymember Kevin McCarty offered his support for an amendment that would become Proposition 17.

"We've been laying the groundwork to shift culture, and hearts, and minds on this issue for some time now," Vargas-Edmond said. "Many people in the state who know people who are incarcerated, or formerly-incarcerated, understand that our communities are safer when people returning home from prison are feeling more connected to their communities."

To Esteban Núñez, it's like moving into a new neighborhood.

"If you're greeted by your neighbors with baked goods, it makes you feel warm and welcome…but if you move, and people are throwing (stuff) at you, and telling you should leave, or that you shouldn't have a say at meetings…why would you want to better that community? You're not as invested."

Núñez is the policy director for the Anti-Recidivism Coalition, an organization supporting and advocating for formerly-incarcerated people. He's also the son of Fabian Núñez, the former California Assembly Speaker. In 2010, Esteban Núñez, then 19 years old, was sentenced to 16 years in prison in the stabbing death of Luis Santos, a college student in San Diego. In 2011, then-Gov. Arnold Schwartzenegger commuted his sentence to seven years as one of his last acts in office. Núñez was released in 2016, with three years parole.

Núñez said he made a horrible decision that landed him in prison, and that everything he does now is based on his prior experiences. He believes that the next step in policy is to ensure that people leaving the criminal justice system are ready to be engaged and knowledgeable citizens on the outside. He wants to ensure that they can "become something more than the stigma that we carry now."

On Oct. 28, Núñez cast his very first vote in a presidential election alongside Michael Mendoza, a fellow ARC staff member. Mendoza was released from prison in 2014 after serving more than 17 years for a gang-related murder. He was one of the first people impacted under 2013's SB 260, which created "youthful offender" parole hearings for juveniles tried and convicted as adults. His parole ended in 2020, making him eligible to vote in this year's election. 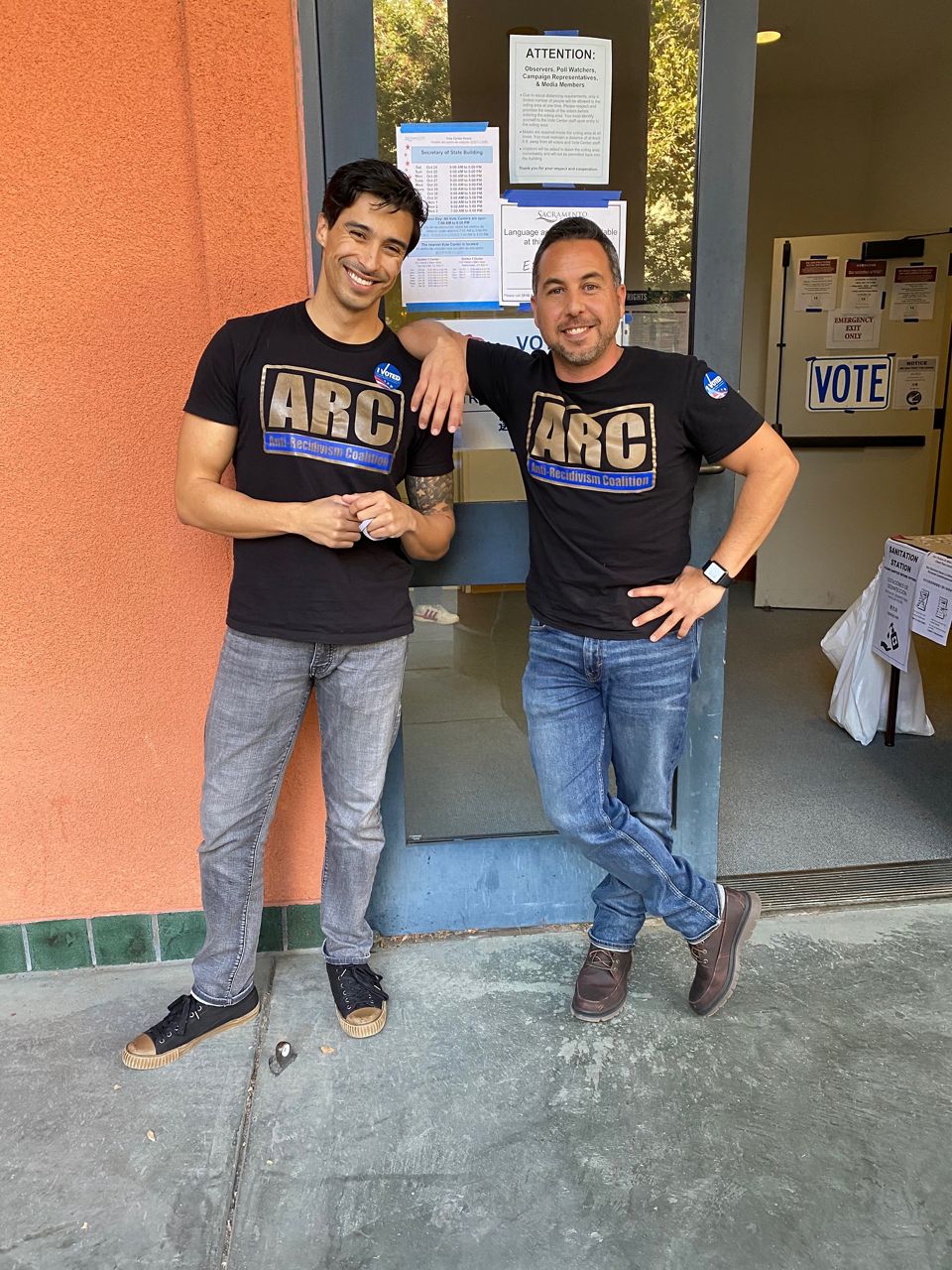 "It was an amazing experience to not only receive a mail-in ballot with my name on it but to open it and receive all of the voting information," Mendoza said. It hit him that he wasn't just looking at names and proposition numbers, but a chance to make an impact. "It was my responsibility to diligently read and understand what I was voting on because it's going to affect so many other Californians," Mendoza said.

"For so many people that have been incarcerated, we have seen first-hand what it feels like to have people vote on the issues that deeply affect our lives, and not being able to speak out for how people are voting," Mendoza said.

The next step, Vargas-Edmond said, is for California to join Maine, Vermont, and Washington D.C. in restoring voting privileges for all incarcerated people.

"The goal of having consequences for harm is to deter future harm from being caused, and to encourage people to turn their life around," Vargas-Edmond said. "Then you want people to be included, to feel like they're part of solutions. Stripping people from their fundamental voting rights is antithetical to ensuring public safety in a democratic country."