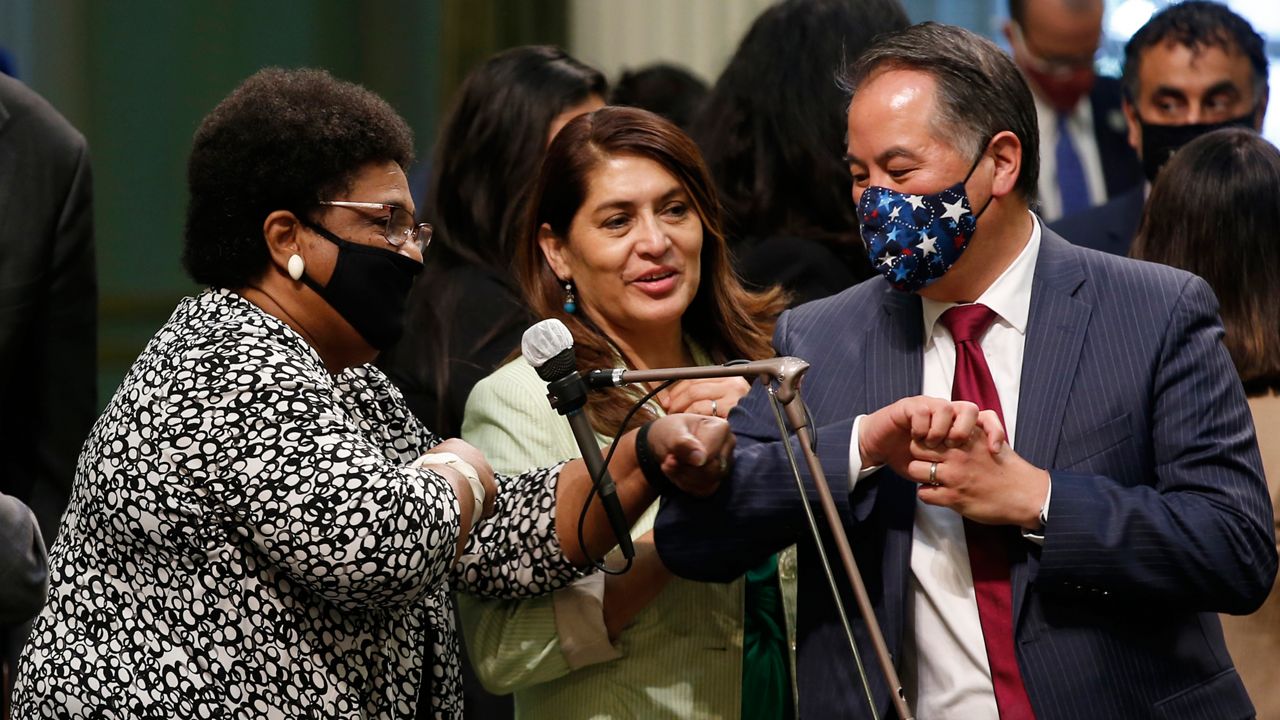 In this June 10, 2020, file photo, Assemblywoman Shirley Weber, D-San Diego, left, receives congratulations from fellow Assembly members Sharon Quirk-Silva, D-Fullerton, center, and Phil Ting, D-San Francisco, after the Assembly approved her measure to place a constitutional amendment on the ballot to let voters decide if the state should overturn its ban on affirmative action programs, at the Capitol in Sacramento, Calif. The killing of George Floyd has sparked broader discussions of race and discrimination in state legislatures across the country. Affirmative action, reparations and designating racism as a public health crisis are generating debate and a fair amount of controversy. (AP Photo/Rich Pedroncelli, File)

If Approved by Voters, Prop. 16 on November Ballot Would Reinstate Affirmative Action in CA

California does not have Affirmative Action.

In 1996, voters approved Proposition 209, which stated that “the state cannot discriminate against or grant preferential treatment on the basis of race, sex, color, ethnicity, or national origin in the operation of public employment, public education, and public contracting.”

Last month, the California legislature passed ACA 5, a measure to place a constitutional amendment on the November ballot that will allow voters to decide whether or not to reinstate Affirmative Action. The ballot measure is Proposition 16. A vote in favor of Prop. 16 would repeal Prop. 209.

Assemblymember Shirley Weber of San Diego is one of ACA 5’s authors.

What a great win for #ACA5 today! California is ready for a change!!

“We’ve discovered that it’s far more difficult to try to recruit students and support students when you don’t have the authority to do so, and many folks are afraid to actually reach out and do things simply because they’re afraid to be sued,” Asm. Weber said. “So for 24 years, we’ve been struggling with this and trying to figure out what to do. And obviously this is a new generation, a new opportunity for people to assess whether or not we want to continue with the current program and the current process of not having Affirmative Action.”

Asm. Weber said California is one of eight states that doesn’t practice Affirmative Action: “The other states in the union actually do and do well.”

“We don’t see an increase in certain populations at the university, nor have we seen a decrease in those populations,” she said. “They’ve not benefited at all from Prop. 209, and we realize that in the area of contract, particularly women, have really suffered as a result of that. They have lost a number of contracts in state and the local municipalities.”

Asm. Weber said people thought ACA 5 would never pass because it needed a two-thirds vote from both houses, but she was up for the challenge.

We are the ones we’ve been waiting for. On this historic day I am incredibly grateful to all my colleagues and overwhelming support on #ACA5
We have a long way to go to achieve equality, but we are one step closer today #OpportunityforAll @OppForAllCA pic.twitter.com/aPzr0zGQDN

“I was wondering, ‘Oh my God, how am I going to explain to this floor again that racism is real and it has had a negative impact on people’s lives and every aspect?’ And then all of the sudden, the Floyd incident occurred, but first the pandemic, that really showed the cracks in our system with regards to those who are poor with limited opportunity.”

George Floyd was killed by a now-former Minneapolis police officer in late May. Black Lives Matter protests have erupted across the world in response.

“[George Floyd’s death] sealed the deal in terms of people looking and saying, ‘You know, this thing is real. This racism is real. It’s very deep. And it has really affected the soul of this nation. And we have to do something,’” Asm. Weber said. “And one of the things we can do is try to talk about equal opportunity and access, not giving people things, but hopefully leveling the playing field so that they can play equally if given the opportunity to do so.”

“You don’t call it discrimination when you’re dealing with the issue of equity. If people are starting in different places and it’s not their fault, then you have to figure out how you level the playing field,” she said. “You have to unravel some of the barriers and the racism that’s there and the sexism that’s there that prevents it from happening.”

In 1996, CA voters approved Prop. 209, which banned Affirmative Action in the state.

In June, the CA legislature approved @AsmShirleyWeber's measure to place Prop. 16 on the November ballot, which will allow voters to decide whether or not to reinstate Affirmative Action in CA. pic.twitter.com/nl9BZEOQvu

“You have to be affirmative. You have to basically move and create opportunities for young girls to start working in science and believing in themselves and making things happen. And then it’s up to them to basically be successful in the career,” she said. “You’re not going to give them a whole career, but you have to level the playing field, and you have to acknowledge that the field has been unequal and still remains unequal.”