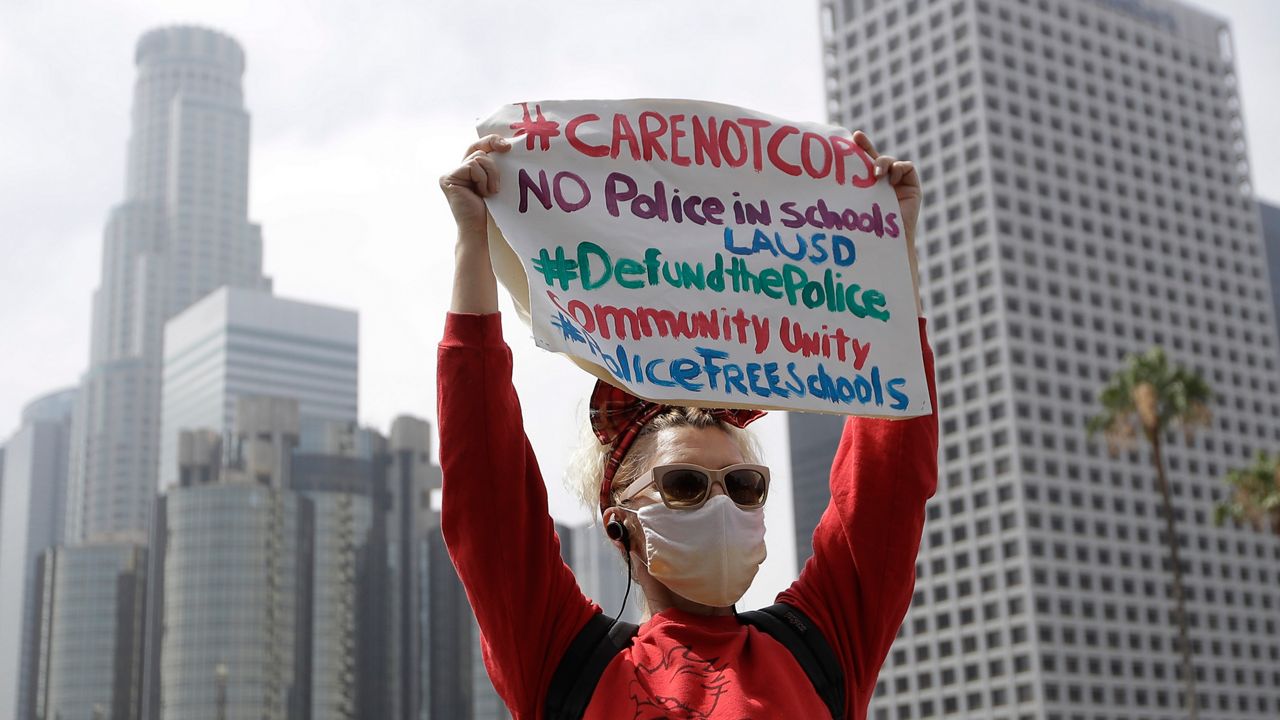 A demonstrator holds a sign in front of the downtown skyline during a protest to demand the defunding of the Los Angeles school district police outside of the school board headquarters Tuesday, June 23, 2020, in Los Angeles. The Los Angeles City Council has voted to slash the Police Department budget by $150 million, reducing the number of officers to a level not seen for more than a decade. The council approved the change Wednesday, July 1, 2020, dropping the number of officers to a little more than 9,700 by next summer. (Marcio Jose Sanchez/AP)

“The police are there as a deterrent,” McKenna tells Inside the Issues. “I'm not an advocate of a police state. I believe that school police are a safety factor for the staff as well as the students, and they’re a deterrent from the intrusion of the outside of a campus by others.”

According to McKenna, the members who also voted “no” have experienced police in schools to some capacity. He said the board members all have different experiences with a law enforcement presence on campus.

“That’s three of us on the board who have been principals of schools, middle schools and high schools, where that’s the only place where police exist,” he said. “The other board members, to their difference, have never done that. But I think they’re caught up in a movement that says, ‘Police are the enemy.’ Well, all police can’t be the enemy because a society without police is a self-governing society and America hasn’t gotten to that place yet.”

McKenna says there are differences between school police and municipal police officers.

“Quite frankly, police don’t arrest students on campus. That’s a misnomer,” he said. “I am the only African American [on the board]. There’s only been one African American on the board since the board existed,” he said.” That doesn't give me expertise but it does give me experience.  And having been raised in the segregated South of New Orleans until I graduated from a historically Black college, I know that municipal police can be brutal but they also can be effective as well.”

"I think there's a lot of exaggeration & even some fabrication... about what the purpose of school police are & what the effect on the children are."@LASchools Board Member @DrGeorgeMcKenna said "most of the work, overwhelmingly, that school police do is mentoring students." pic.twitter.com/aIg95oIVi2

Until schools can access more social workers and psychiatric professionals to help students, instead, McKenna said their presence is important in helping to deter the students.

“I’m not here to defend the police but I am here to talk about the relationship that school police have had. When you take away school police, and have nothing in its place, other than the assumption that we will find these social workers and we’ll find these psychiatric social workers and we’ll find this restorative justice council. They don’t exist right now.”

Students can engage in a variety of inappropriate behaviors like using foul language, disrupting class or getting into physical fights while at school.

“When a violence breaks out on a campus, I don’t know too many social workers who are prepared to break up a fight. So, a police officer would be there to intervene in that case,” the board member said.

McKenna also expanded on Los Angeles Unified School District Superintendent Austin Beutner’s recent announcement that the campuses will not open this Fall due to the recent spike in coronavirus cases.

McKenna explained the decision to keep campuses closed this Fall was made in the best interest of the children.

"Given the reality of what is happening now, I think we would be too ambitious and too aggressive to try to find a way to bring the children back to school."@LASchools Board Member @DrGeorgeMcKenna thanked God for technology because LAUSD has opted for online classes this fall. pic.twitter.com/sAs4EMKohZ

“Given the reality of what is happening now, I think we would be too ambitious and too aggressive to try to find a way to bring these children back to school,” he said.

He said while virtual learning for kids has never been done before at this scale, school officials are fortunate to have technology as a solution.

“So, coming up with as many ways as we can, because we have no template for this. There’s no place else we’ve ever experienced this in my lifetime — how to educate from a distance,” McKenna said. “Thank God we have technology. It’s imperfect, but it's what we have and that's going to be our rationale for moving forward, trying to keep as many students engaged as possible.”

Making sure there are ample testing supplies has also presented the district with challenges.

“We don’t have the resources, economically, to test as frequently as we’d like to. So, we would have to lean on the state and the federal government, and they don’t seem enthusiastic, at least at the federal level, of helping us,” McKenna said. “So we're trying to make this up as we go along. There is no perfect scenario here. It’s going to be challenging either way until we can get a vaccine for this virus, I don’t know how we would get back to what we call normal.”